Lon Chaney Jr. signed a contract with Universal Pictures in 1941.  His first monster picture was The Wolf Man playing the titular character.  From there he would go on to play the Wolf Man again several times along with other monsters like the Frankenstein creature, the Mummy, and the son of Dracula.  Chaney gets top billing in 1944’s The Mummy’s Curse, but the true star of the movie doesn’t appear on camera.  I’m talking about Chaney’s behind the scenes adversary, makeup artist Jack Pierce.  There are only two reasons to see this film:  Pierce’s amazing make-up work and if you are Mummy completist.


This is the fifth installment in the Mummy franchise from Universal.  It started in 1932 with Boris Karloff as Imhotep, but the series was quickly rebooted in 1940.  Somehow the Mummy, now name Kharis, has been trapped in a Louisiana swamp with his princess.  If the timeline presented in the film works out right, the year is 1995.  Apparently things haven’t changed much from the 40s as racial stereotypes still inhabit this rural work camp.  A land developer wants to drain the swamp, but all of the workers are fearful.  They believe the swamp is cursed.  Some guys from a museum show up and tell the land developer that they believe there are a couple of mummies in the swamp and they can’t wait to start digging.  It’s around this time that the first body shows up.  We later find out The Mummy is indeed on the loose and searching for his princess.  She also wakes up, but for some reason can’t remember her past.  Anyone who tries to help her, ends up dead at the hands of a the mummy.

The movie only runs 62 minutes, but after the first few kills it all becomes very repetitive.  The Mummy looks great, but moves like an old lady.  It doesn’t seem like he would be that hard to get away from.  While he can take a shotgun to the gut and has the strength of ten men, his lack of speed makes him the worst assassin ever.  Also the writing and acting are not that great.  If there was one character that I wanted the Mummy to take out it would be the main hero.  Every line he delivers is terrible, but really the rest of the cast isn’t far behind in the hammy overacting category. 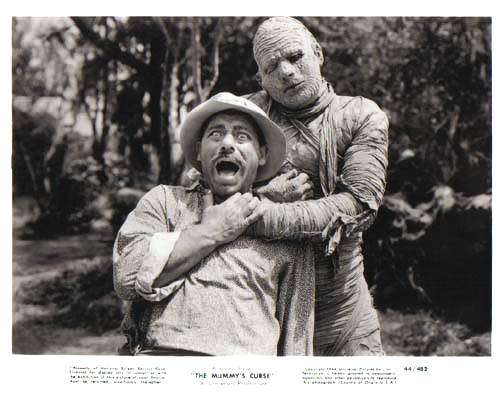 The main reason to see this is the makeup work.  It’s stunning.  The Mummy’s face looks like dried out leather.  His costume is perfectly detailed.  When the princess awakens, her body is covered in layers of dirt.  It’s such a shame she has to go and wash off her outer mummified layer.  Jack Pierce and Chaney hated each other.  Apparently with bandages and make-up it took 8 hours to prepare Chaney each day for his role as the mummy.  Before this, Pierce would glue yak hair to Chaney’s face and then burn it with a hot iron to get the right look for the Wolfman.  The Mummy’s Curse proves the old adage: with great suffering comes great art.  Thank you to Lon Chaney Jr. for suffering through Jack Pierce’s torture.  The Mummy makeup is spectacular.  Fans of classic creature features are richer for it.

The Mummy’s Curse is currently streaming on Netflix.  It’s also available on DVD with The Mummy’s Ghost here.

Check back in tomorrow for another Ain’t It Scary Review as a hardened detective takes on a master of the occult in a 1990’s horror noir tale. 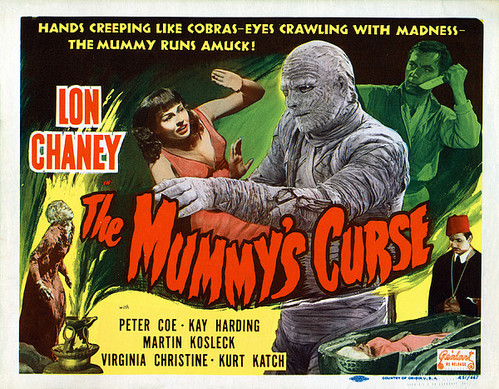