John Ary here with another installment of Ain’t It Scary Reviews.  Today invisible aliens plot to take over Earth using the bodies of our dead.

The 50’s must have been an interesting time for the world.  The idea of atomic energy had everyone excited for space travel, cheap electricity and new ways to improve everyday life.  It also scared the bejesus out everyone.  Threats of nuclear weapons caused tension among the world’s nations and setup a terrifying scenario in which the earth could possibly bomb itself into oblivion.  It’s these insecurities that the film Invisible Invaders mines for most of its story. 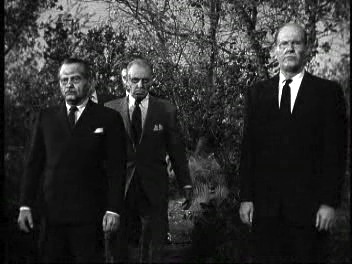 A hostile race of aliens threaten the earth and demand our immediate surrender.  They inhabit the bodies of the dead and stumble around like zombies attacking everyone in site.  A small team of scientists sequester themselves in a military bunker and must figure out how to defeat this alien menace before it is too late.

If you like low-budget sci-fi from the 50’s and 60’s, you’ll find a lot  of the routine staples here... plenty of stock film of things like mushroom clouds, plane crashes and car wrecks... scientists talking gibberish, pulling random levers and building “ultra-hi-tech machinery”... reanimated corpses stumbling after people... hockey announcers getting attacked... awkward romances that spring up out of nowhere... a once great actor that shows up for 5 minutes in order to get top billing on the movie poster... It’s pretty much your average b-movie. 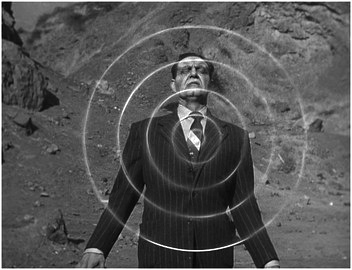 If you are looking for scares, you may want to skip this one.  It has a creepy setup (aliens using our dead as weapons), but the director chooses to focus more on the big ideas than instances of terror.  I like how the movie uses the 4 people trapped in the bunker as an allegory for the world and their fear of the future.  As the situation becomes more dire, each character functions more as a metaphor for man’s virtue, representing intelligence, bravery, fear and optimism.  The end leaves us with a not so subtle image of the U.N. and plea for nations to work through the age of the atom together.

Invisible Invaders is currently streaming on Netflix.  It’s also available on DVD with Journey to the Seventh Planet here.

Check back in tomorrow for another Ain’t It Scary Review as Lon Chaney Jr. limps into the final chapter of a once proud Universal Monster franchise.