Quint has a strange and unusual interview with Winona Ryder! We talk pets, Frankenweenie, Beetlejuice 2 and more!

Ahoy, squirts! Quint here. I was quite excited to get a little bit of time with Winona Ryder when she came through Austin to premiere Frankenweenie at Fantastic Fest. I really didn’t know what to expect when I sat down with her, to be honest. I could see it play out a few different ways and the way it ended up happening was about the best case scenario for me as an interviewer. It’s a conversation. It’s not a professional, dry Q&A, but a real deal two people talking to each other conversation, which is becoming a bit of a rarity in these kinds of junket interview situations.

That having been said, I hope to God you guys find it interesting because we spend the first half of the interview just talking about our pets. I’m on exaggerating. But in that bit we do venture into some Edward Scissorhands stories, so it’s not all gushy animal lover stuff.

We do get to talk about Frankenweenie, her character Elsa van Helsing and even a bit about her thoughts on the current talk of Beetlejuice 2. I particularly like what she has to say about Lydia Deetz’s influence on her Frankenweenie character, her Alan Arkin dog story and what she’s asked to do by Beetlejuice fans.

Hope you enjoy the chat! 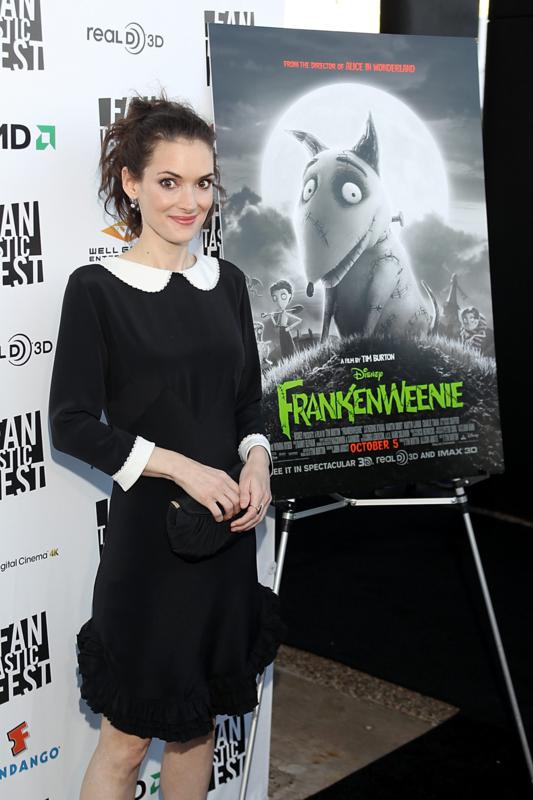 Quint: Did you hear about the dog theater?

Quint: For the big premiere tonight they’re devoting one of the theaters showing the film to only dog owners with lapdogs, which have to be wearing dog tuxes.

Winona Ryder: Oh! That’s amazing. What if they, like, bark and stuff?

Quint: I guess that’s why they get their own theater.

Winona Ryder: I wonder how that’s gonna go. Do you have a pet?

Quint: I have a really bitchy cat.

Winona Ryder: My cat, Bianca is her name, was born the month that I was born and she lived to be 21, which is quite old for a cat. What’s interesting is my dad grew up in Brooklyn and he found this kitten when he was 11 and we had every generation, every daughter (from that cat.)

Bianca was kind of my cat. What’s so weird is when she passed away I became kind of allergic, but it’s psychosomatic, I think. It’s interesting how cats, including Bianca, know that they’re dying. She went into a cupboard… they kind of know. So, you have a cat, too?

Quint: I do and I’m kind of allergic, too.

Quint: I grew up a dog kid. I always wanted a dog and when I was around 14 or 15 we rescued a stray puppy and I got my wish. My mom was always the cat person. She loves cats. I like them, too, but not as much.

Winona Ryder: I remember on Edward Scissorhands we were shooting near Tampa, at a sort of golf resort. That neighborhood was being built and they let Tim come in and paint the houses and stuff. But I went a shopping mall one day and you know those pet stores? They’re awful. I saw this little puppy and I got it so I could get it out of there. I brought it back to the hotel and took care of him for a few days, but I just knew I couldn’t work and take care of him, so I gave it to a nice family.

But I’ll never forget that thing of seeing an animal suffering in a little, tiny inhumane… actually, the word wouldn’t be “inhumane.” It’d be “indogmane” or something (laughs).

I remember bringing it to the set and it was just too much. We named him Dude.

Quint: I actually named one of my mom’s cats Dude, believe it or not. And of the litter he ended up being the fattest cat in the world. He lived up to his name.

Winona Ryder: Bianca was very… when you said “bitchy…” (laughs) She was very regal and there was something dame-ish… She always looked down on people.

Quint: “Now it’s time for you to pet me. Now I’m finished with that.”

Winona Ryder: They have personalities! Alan Arkin, actually, told me this story on Edward Scissorhands… he had just lost a good friend of his and he was just sitting outside and was really sad. His dog came up and… put your arm up (I comply)… he just came up and went (she pats the top of my hand a few times. Cue heart-flutters). He consoled him! He was like, “I swear to God, it knew.” He had never done that! To pat him twice on the hand and nod? Amazing!

Quint: Wanna hear something like that? I do like cats, but I was always a dog person. The same day I had to put my dog to sleep a little, tiny kitten came walking up to me outside my house.

Winona Ryder: Do you think it was… wow…

Quint: We actually tracked her back to a neighbor, who ended up being a redneck guy that told us he had a boy and a girl cat from a litter and just wanted the “Tom” and was going to dump the girl cat in the country. So, I told him I’d take her.

Winona Ryder: And you had that cat for a while?

Winona Ryder: Wow! So, did you like the film? I mean, I was really moved by the film.

Quint: Oh yeah. The animators did a fantastic job capturing Sparky… as a dog lover and ex-owner, they really nailed all the subtle dog-isms. They made him real, so I really connected with the central boy and his dog story.

Winona Ryder: I feel like it captured that… being that age. I didn’t lose any pet at that age, but it captured how attached we are to them. Bianca and Lavinia, her mom, were so a part of our family.

Quint: There’s a definite bond there. I’m an easy mark if a filmmaker gets that connection right and I think Tim and his team really nailed it.

Winona Ryder: Those were great… but I’m sorry, I haven’t let you ask any questions!

Quint: (laughs) It’s no big deal. We should talk a little about Elsa. Obviously, she’s a young girl in the story, so was there any sort of mindset you had to put yourself in or a trick you did vocally to capture that in your performance? 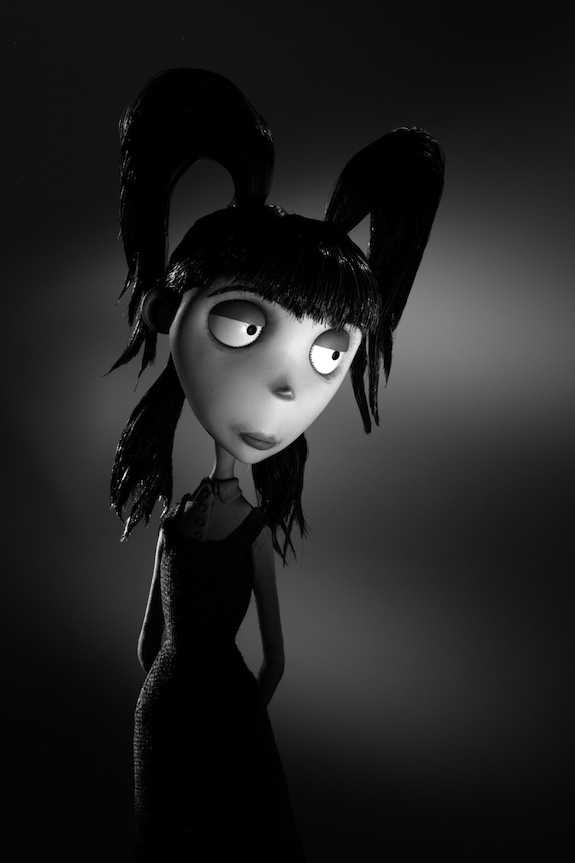 Winona Ryder: I drew on my character from Beetlejuice a little bit. I imagined Lydia as an 8 year old. A little bit of a loner, a little shy, not the popular girl and not the class clown. If anything, Tim is a very expressive person, but sometimes not so verbal. We’ve always had this sort of telepathic… like, I always sort of know what he means.

He definitely wanted (the performance) to be smaller, but very real. I know people think of that character in Beetlejuice as very dry and cynical, but there’s a real innocence and purity (to her). That’s why she could see the ghosts. To this day that’s the movie I’m recognized most from.

The reason I think kids really respond to Tim’s work is there is that purity. With children, these characters… you know, there’s always this attitude that “Oh, they’re just kids. It’s all fun and silly,” but actually it can be just as painful as being an adult.

Quint: Well, you haven’t built up any defenses yet.

Winona Ryder: Yeah. It’s interesting to think of what Tim was like as a little boy. I also drew on that. I drew on my relationship with him. He really changed my life. He kind of gave me a career with Beetlejuice.

Quint: Before I go, I wanted to bring up all this current talk from both Tim and Michael Keaton about another Beetlejuice film. I’m not fishing for scoops or anything, but we’re in an age where a lot of the later sequels to movies we grew up loving haven’t lived up to our expectations. Indiana Jones 4, the Star Wars prequels, even Tron… Do you think a Beetlejuice sequel, with all the talent of the original behind it, would break away from that trend?

Winona Ryder: I don’t really know what’s going on. I know something is being written. I think I’m sort of old fashioned about not giving anything away, but there’s actually nothing for me to give away!

Quint: Sure. I just wanted to get your opinion on whether or not you see room in that world for a sequel. I personally think there could be a good story in there, especially considering just how great Michael is in that role.

Winona Ryder: I know, right? I would be really interested in that because it’s such an iconic movie. Again, it’s the movie little kids come up to me about and when I’m going through airport security they make me say “Beetlejuice” three times or I’ll miss my plane! (laughs) So, it is ingrained in us in a way. It would be very, very interesting to see. I just don’t know yet what the story is. Obviously it’s Michael and Tim’s film, their collaboration and vision and I was just so lucky enough to be cast in it. I like to think I brought something to it. 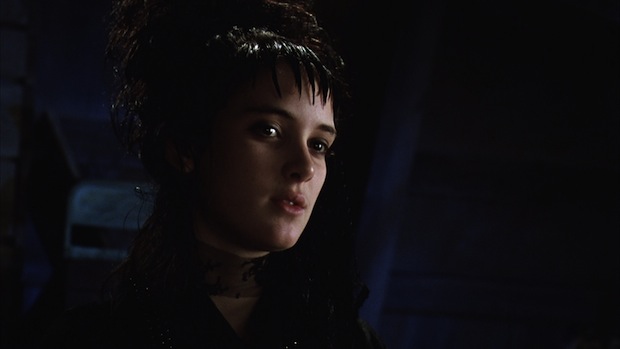 As I stood up to leave, I assured Ms. Ryder that she did indeed bring a lot of the movie, especially for most boys my age who ended up with teeny-tiny crushes on Lydia Deetz. I expected a laugh and instead got one of the most sincere “thank you’s” I’ve ever heard.

Ryder stressed that after making that movie she went back to high school and everybody thought she was a freak or weirdo because of Lydia and she caught a lot of hell for it, so it was vindicating to hear that a generation of nerds like myself (my words, not hers) really connected with the character.

I forgot to propose right then and there, but maybe next time. Hope you guys enjoyed the conversation as much as I did. We still have Martin Landau on the docket, so keep your eye peeled for that interview!