Harry was blown away by Nicolas Lopez's AFTERSHOCK starring Eli Roth - But watch what you read about it!

Alright, so we're beginning to feel Fantastic Fest 2012 begin to come to an end.   You can sense it, familiar faces have disappeared returning to the far flung homes, but the festival is still cracking away.   I had intended to see two films today, but the traffic on the way downtown was just truly insane, what usually takes 35 minutes at rush hour for us, took an hour & twenty.   SO...  we had a proper dinner and arrived in time for one of the clear highlights of FANTASTIC FEST 2012. 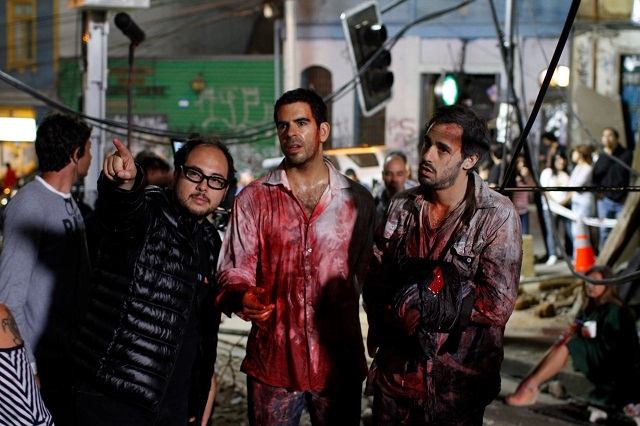 I've known that Eli Roth has been down in Chile shooting with Nicolas Lopez on some kind of "Earthquake" flick called AFTERSHOCK.   Eli has produced the film - and stars in the movie.   Now, if you don't know Nicolas' work - I highly recommend checking out PROMEDIO ROJO and SANTOS, along with his FUCK YOUR LIFE if you can.   Most are available via Netflix, but ever since 2004 when Nicolas Lopez kicked off my first day of SXSW with a screening of PROMEDIO ROJO... I've been a fan.  Instantly upon seeing the film, I knew...  this was going to be a major director.

I know, the film is silly, but the heart and soul of that film told me everything I needed to know about his abilities.   The movie was absolutely fluent in geek, but it was also just a wonderfully shot film.   The characters were compelling and I instantly wanted to see more by him - and thus far he hasn't disappointed...   BUT, I really do mean this when I say...  For most of you, even if you've seen everything that Lopez has done...  AFTERSHOCK is a quantum leap forward in terms of having a film that can play world wide.

AFTERSHOCK is structured to be two entirely separate movies, but if feels seamless to me.   And the longer the film played as a vacation, the more tense I got, wondering when the world was going to fall apart.   And how bad it was going to get.

Having Eli Roth as a producer and star - who worked very hard with Lopez to make this film, I felt a bit unsettled as Eli does like to go places that most films fear to tread and I was very curious to see how this creative partnership was going to play out.

The film is structured like POSEIDON ADVENTURE or TITANIC.   They dedicate the lion's share of the first half to 100% getting to know how these characters tick.   Before I go into that, here's the set-up...

Eli Roth plays a fairly square recently divorced Legal Firm working Dad - hanging with a pair of Chilean buddies on vacation and he's trying desperately to hook up with some girls, but it being a foreign country - and his rather sad lack of game results in a lot of blue balls for the Bear Jew.   When Tim League introduced the film - he referred to Eli as a Douche in the film - and for the majority of the movie - I didn't get that.   We all have those single friends that just have a noted lack of game, and Eli's character is just out of his depth.  It is very fun to watch though, because Nicolas Martinez's Pollo - a rich cool as fuck Chilean friend that is a social animal - in the best kinds of ways.   He's the life of a room, knows everyone it seems - constantly makes any slightest problem disappear and is the focal point for plans of action in the first half of the film.  Then there's the third friend, Ariel Levy, who plays Ariel.   He's an ex-fatman, whose girlfriend serially cheats on him and yet he is still begging to get back with her.  Pollo is trying to get him to move on, but he's glued to his phone, texting her and watching her FACEBOOK to figure out what she's up to.

The sense of fun these guys have is at the very least a full on equal to the fun that the HANGOVER movies have given us as a template for what having fun in a modern film is like...  BUT, this feels more real.   The clubs and concerts feel absolutely authentic.   When they hook up with these 3 girls played by Andrea Osvart, Natasha Yarovenko and Lorenza Izzo...  They decide to head to a coastal town for "the real Chile" and an attempt to bang these three chicks, if we're being honest.

I love the Chile of the first half.   It's a great metropolitan environment with beautiful structures and so colorful.   The clubs kick ass - and the music is wonderful.   The whole time you're watching these sequences, all you can think is...  THIS LOOKS LIKE SO MUCH FUN!

So they go to this club in the new town.   They're all getting closer together, they're kind of butting heads, pushing each other's buttons, but when Andrea Osvart and Natasha Yarovenko, who play sisters, start fighting...  it's like this sister battle decides to just tear the world apart.   The earthquake begins - and all fun exits.   Suddenly, it is a very real nightmare scenario.  People are dying truly horrible deaths, the sense of panick and the tension of 'What the fuck do you do' that comes out of this initial sequence sets up a chaos that stays with us for the next half of the film.

When the film becomes about surviving this tragedy, the film becomes deadly serious.   Communications go down, rioting begins, a prison cracked open and sprays the shit of soceity all over the town.   Rape and murder gangs take to the streets - and the 3 women in the friends' care are now attracting these gangs of predatory human wolves to pursue them.   The tension goes through the roof - meanwhile, through all of this - people start getting mangled, killed and mentally shutting down.   I love Eli through this sequence.  He's in complete survival mode - and completely aware of the fact that if his friends don't go through this with him, he's fucked.   He doesn't know where he is, he doesn't speak Spanish - he's dead without them - and well...  It's just great to watch how he moves forward through this disaster.

This is a huge Irwin Allen film, that was shot for a song, but measures up to anything Hollywood has dished out.   Remember how great FAST FIVE looked - this looks that good.

DIMENSION picked up this film at Toronto last week and was good enough to let FANTASTIC FEST show the film, but personally I feel they need to target a great disaster date and build a huge release for this film.   The audience at Fantastic Fest were cheering, screaming and just roaring with the film.   Really great audience film.

Now the film is actually based on that 2010 catastrophic Earthquake that director Nicolas Lopez lived through - and then heard stories from all over the country.  Friends all sharing where they were and what they were doing.  A girlfriend that was running from a Tsunami...   Rape gangs, looters, escaped prisoners...  even the club where everything goes to hell...  ALL taken from reality.

I love how this is a disaster film that doesn't linger or particularly fetishizes the disaster.   Like how DISTRICT 9 shows the big stuff kind of caught in the process - instead of lovingly photographed.   You see huge things, but when huge stuff is going down, these characters usually move away from the enormous building that is toppling.

This film puts the Roland Emmerich disaster films to shame, because the characters just live this experience in a much more honest manner.   Nobody is particularly more precious than anyone else.   Eli is forced to show a rather dark side to his character's psyche at a key moment that feels like a moment that makes him a bad person, but at the same time...  during that moment, think about the phone call with his daughter.   How he left an easy lay, to talk with his daughter - and remember that face and that precious little girl - and suddenly I understand everything that happens for him.

Human beings do extraordinary things in the chaos of the world, but they also make decisions that scar them for life.   This is a film that shows that we are people that enjoy and love life.   That try to have fun, that travel to learn, to party and to fuck.     That our iPhones, flashy cars and riches don't amount to a hill of beans when the shit hits the fan and the world is coming down around you.

I love this flick.   I love that it just wallops the audience and when it needs to punch you, your spine will feel it.

Tomorrow's a very fun day - with the awesome Secret Screening and a roughcut of PARANORMAL ACTIVITY 4...  I can't wait!   See y'all then!

Watch out for spoilers on this one, you don't want key moments ruined on this one.