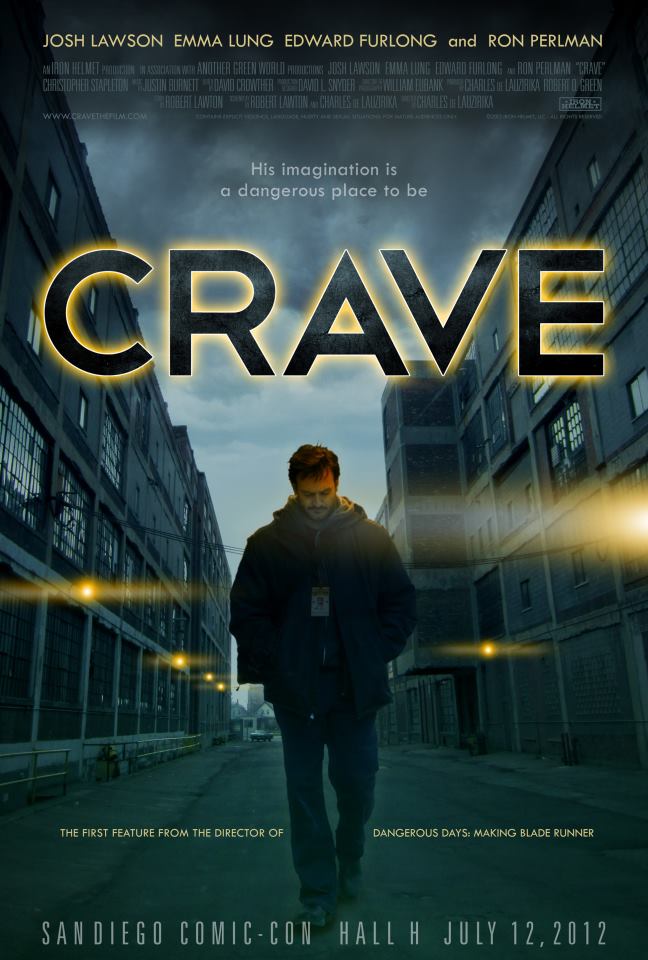 You are familiar with the work of Charles de Lauzirika, even if you don’t know it.  Lauzirika created the great documentaries that made up the BLADE RUNNER Blu-Ray set, the ALIEN Anthology, and many others.  Now, with CRAVE, Lauzirika has created his first narrative feature-length film, and it is a gritty, cerebral thriller with a protagonist straight out of the family tree of loner characters like Travis Bickle or Gene Hackman’s Harry Caul – men tainted and damaged by their experiences.

Anyone who has seen those movies probably has some idea where CRAVE is headed, but what makes CRAVE so fascinating is the performance of Josh Lawson as Aiden, a crime scene photographer who starts to feel “divergent” as each brutal murder takes its toll on his sanity and well-being.  Lawson plays Aiden very much like an Everyman – he has an earnest face that gives the audience a strange disconnect as the movie unfolds and Aiden becomes more detached from reality.  Aiden has a vivid fantasy life where he sees himself in hero mode, and the only seemingly stable relationship in his life is with Pete (Ron Perlman), the police officer who gives him access to each crime scene.

Aiden also has a neighbor, Virginia (Emma Lung), who seems to be in mid-breakup with Ravi (Edward Furlong) and manages to strike up a serious relationship with her.  But as Aiden’s disconnect becomes more apparent and his fantasy world starts to bleed into his reality, he threatens to become a danger to himself and those around him.

CRAVE has a very striking visual style but it’s Lauzirika’s skills as a director that really shine through.  He has a real affinity with his actors and it shows in the performances. Even as Aiden goes deeper into the rabbit hole, Lawson and Lauzirika refuse to distance us from his character even as Aiden distances himself from society.  This can make the audience feel uncomfortable and almost complicit in the goings-on.  Lawson has a very expressive and almost wholesome face which makes for an interesting dichotomy for what happens onscreen.  If there are issues with the movie it lies in the pacing – as this is a character piece events unfold at a leisurely pace at times but Aiden’s difficulty in relating to society becomes more pronounced as the movie goes on.

Although Lauzirika has done a lot of work behind the scenes, this is his first narrative feature film, and it is directed with a confidence and skill of an experienced hand, balancing the character issues deftly with the plot.  CRAVE is a remarkable first film and we should expect to see some interesting filmwork in Charles de Lauzirika’s future.  CRAVE doesn’t quite go to the seedy levels of depravity like Paul Schrader’s work, but that’s what makes the movie work – as Travis Bickle becomes more unhinged the audience becomes more of an observer, but  CRAVE doesn’t give us that luxury, and Lawson and Lauzirika make us partners-in-crime to events as they unfold.  It makes for uncomfortable but rewarding viewing, and CRAVE gets under the skin in the way the best character movies do.