AICN HORROR goes Sasquatchonian all over again with SHRIEK OF THE MUTILATED! THE CAPTURE OF BIGFOOT! DEAR GOD NO! ABOMINABLE! BIGFOOT 2012! & an advance look at SEXQUATCH and BIGFOOT COUNTY!!!

Logo by Kristian Horn
What the &#$% is ZOMBIES & SHARKS?
Greetings, all. Ambush Bug here with another AICN HORROR: ZOMBIES & SHARKS column. Once again I’m going Squatching and bringing you a grouping of Bigfoot, Yeti, and Sasquatch related horror to seek out and enjoy. These films come in various flavors of quality, and while I’ve covered Bigfoot films in two previous columns here (where I covered NIGHT OF THE DEMON, DRAWING FLIES, CURSE OF THE BIGFOOT, HOWLS, TROMA’S BIGFOOT, LOST WOODS, and SWEET PRUDENCE & THE EROTIC ADVENTURES OF BIGFOOT!) and here (where I looked at SASQUATCH BIRTH JOURNAL, BIGFOOT 1970, LEGEND OF BOGGY CREEK, CLAWED, SAVAGE, THE SASQUATCH GANG, and THE WILDMAN OF THE NAVIDAD!) , there seems to be no end in the amount of Bigfoot films to plumb. With the release of DEAR GOD NO! a while back, the newly released BIGFOOT with Danny Bonaduce and Barry Williams, and the upcoming BIGFOOT COUNTY and SEXQUATCH, I figured it was high time for another Squatch column. But fear not, this won’t be the end--with THE LOST COAST TAPES and EXISTS from the makers of THE BLAIR WITCH PROJECT on the horizon, it looks like there will definitely be more Bigfootin’ here at AICN HORROR in the near future. So sit back and enjoy this pack of hairy horrors! 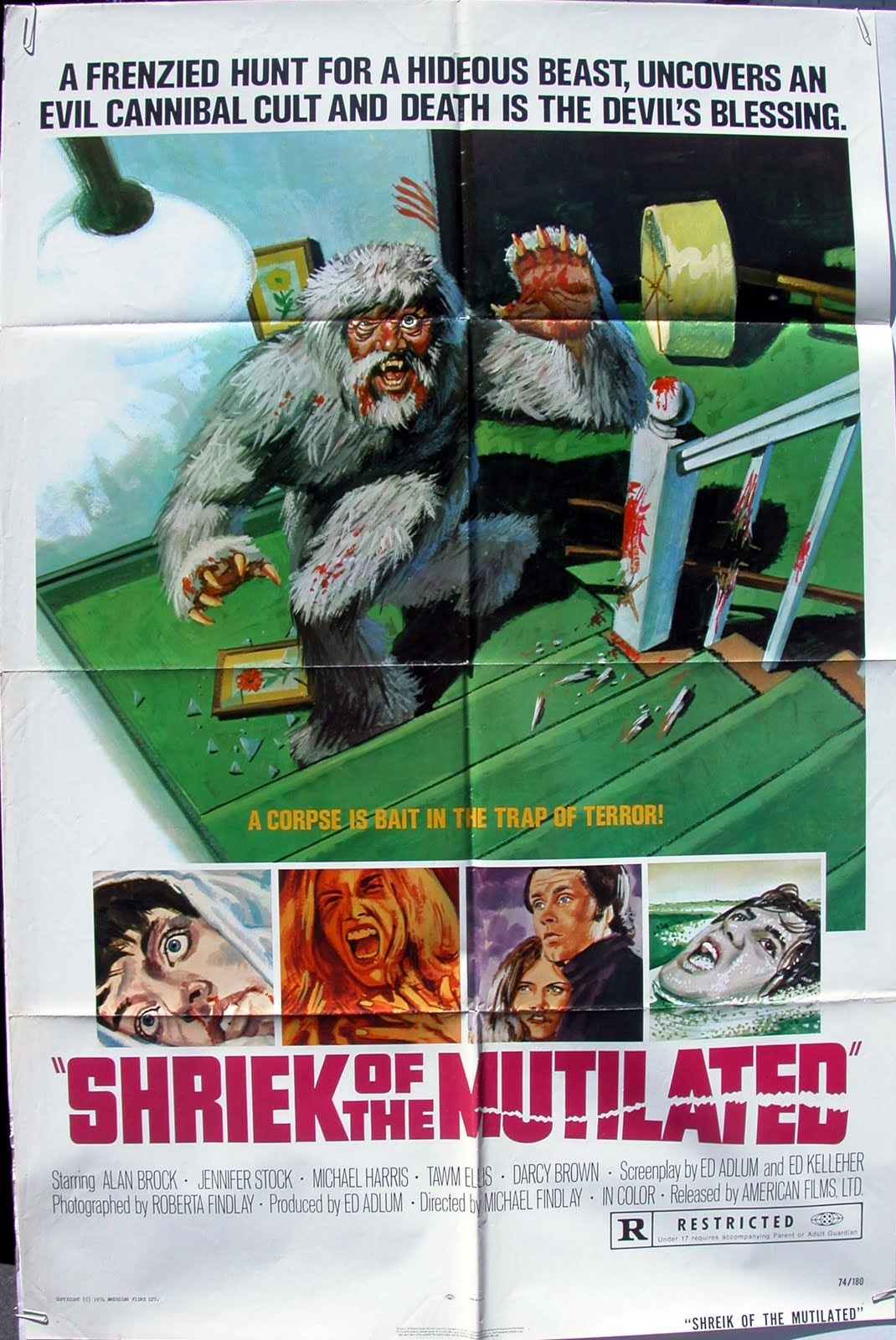 Since this film has been out for such a long time, I’m going to be discussing spoilers here in this review. SHRIEK OF THE MUTILATED is one of those films I’d heard about for ages, but never seen. Now that I have, I understand its cult status, but this is far from one of my favorite Bigfoot/Yeti films…mainly because Bigfoot doesn’t really appear in this film. 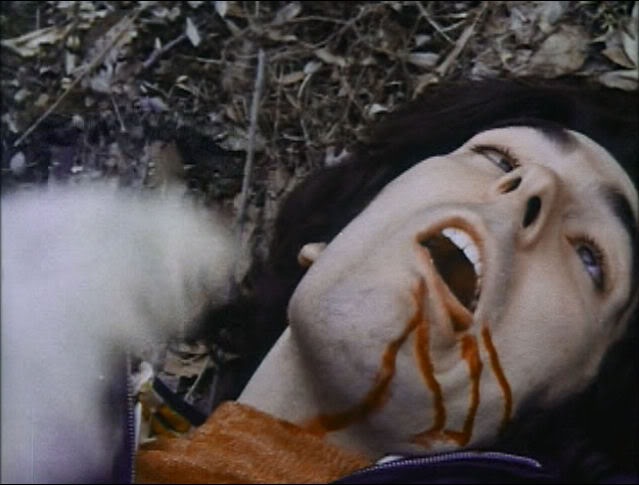 Professor Prell is a bit of an eccentric around campus with his belief in the Yeti. Due to recent sightings, he has convinced some grad students to come out into the forest with him to search for the elusive beast. When one of them, Keith, goes out to dinner with the professor, he is introduced to a dish called Gin Sung. On the trip, the rest of the campers dine on the dish while preparing for the hunt. Soon the hunt begins without them as a giant hairy creature picks off the grad students one by one until Keith and his girlfriend Karen are the only ones left and the mystery is revealed as to who and what the beast really is.

Though we are lead to believe this is a Yeti film, it fits more in line with films like BLOOD FEAST and BLOODSUCKING FREAKS with its attention to cults and ritual. Though contrived, I’m sure the shockeroo ending got a start or two out of filmgoers at the time. Now, it feels like a perfect MST3K film with hokey dialog and characters, including a mute Native American man-servant named Laughing Crow who gives new meaning to the words unintentionally comical. 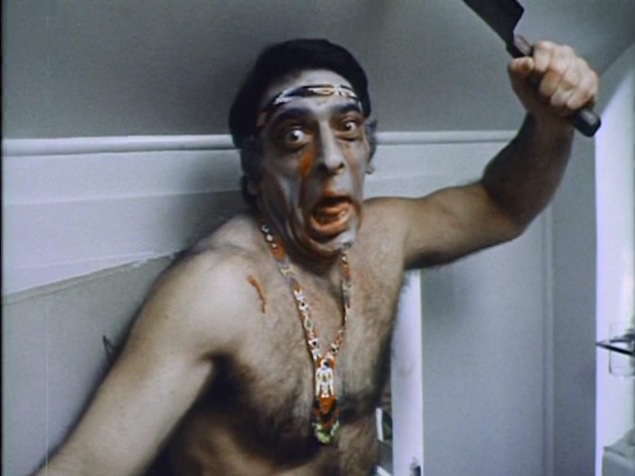 Though SHRIEK OF THE MUTILATED tries to terrify, it ends up being a Scooby Doo episode. The dark tone stays throughout and there’s an amazing sequence early in that involves a bath, a knife, and a toaster that makes the film peak too early. Still anytime Laughing Crow was on screen, this one is sure to entertain and the last line of the film, "Mr. Henshaw — white meat or dark?" definitely leaves it on a pitch black note.

Though not necessarily a Bigfoot film, according to some skeptics, it could be the most accurate portrayal of Bigfoot in a film since they believe sightings to be a man in a suit anyway. 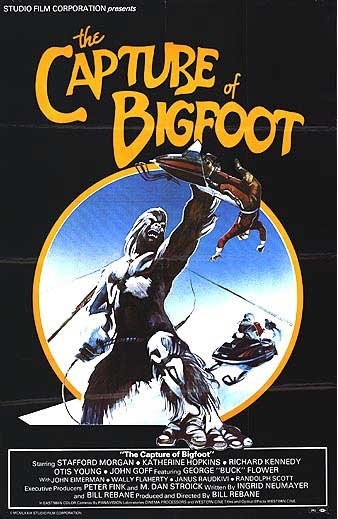 For the most part, THE CAPTURE OF BIGFOOT is a dud of a film. Easily forgettable, the title of the film gives away the most unique aspect of it, that being that Bigfoot is captured here…at least for a little while. 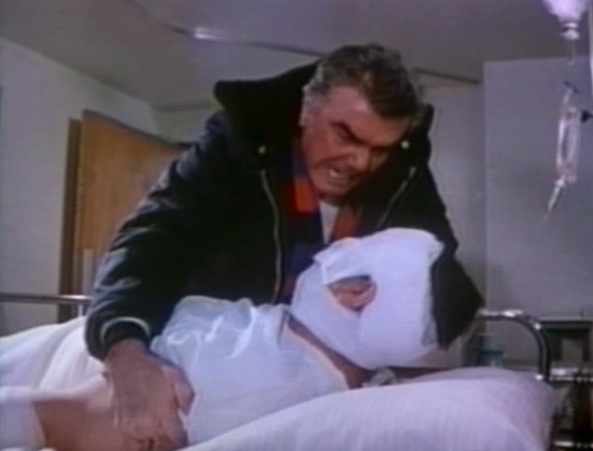 To be more accurate, I believe the beast in this film qualifies as a Yeti since its face is pinkish and its hair is white. Still, the beast is set off when its young is killed by a hunter and begins wreaking holy hell on a small woodland town. The locals fight back with good old know how and shotguns, backed by a moustache twirling millionaire who wants to capture and exploit Bigfoot in a side show.

When George “Buck” Flower is the most talented actor you’ve got in a film, you know you’re not in for a fine example of the dramatic arts. Old “Buck” plays what he always does--the town drunk--And does so with his usual flair. But his chops are better than most of the rest of the cast, including a sheriff who likes to impersonate John Wayne and Humphrey Bogart at the most inopportune occasions. 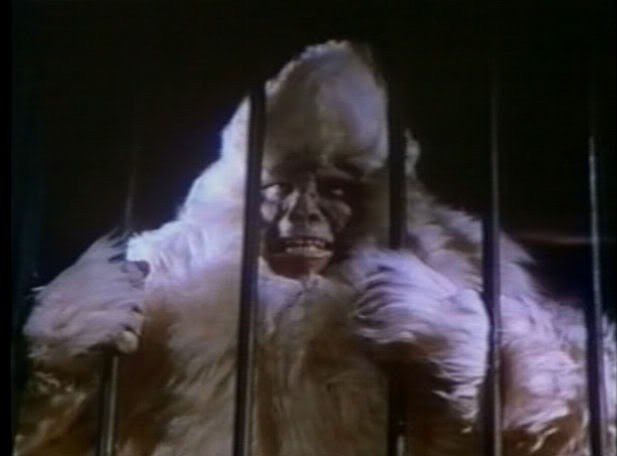 By far one of my least favorites in the Squatchploitation entries, the film does have some unintentional laughs like when the baby Bigfoot is shot and when a Native American walks in on panel to save the day and then disappears for the rest of the film. THE CAPTURE OF BIGFOOT is only for those who want to say they’ve seen every Bigfoot film out there. It’s relatively bloodless and the amateur acting makes this one painful to sit through.

But if you’re curious or maybe a glutton for punishment, I have the whole gol-durn movie here to watch!

But don’t say I didn’t warn ya! 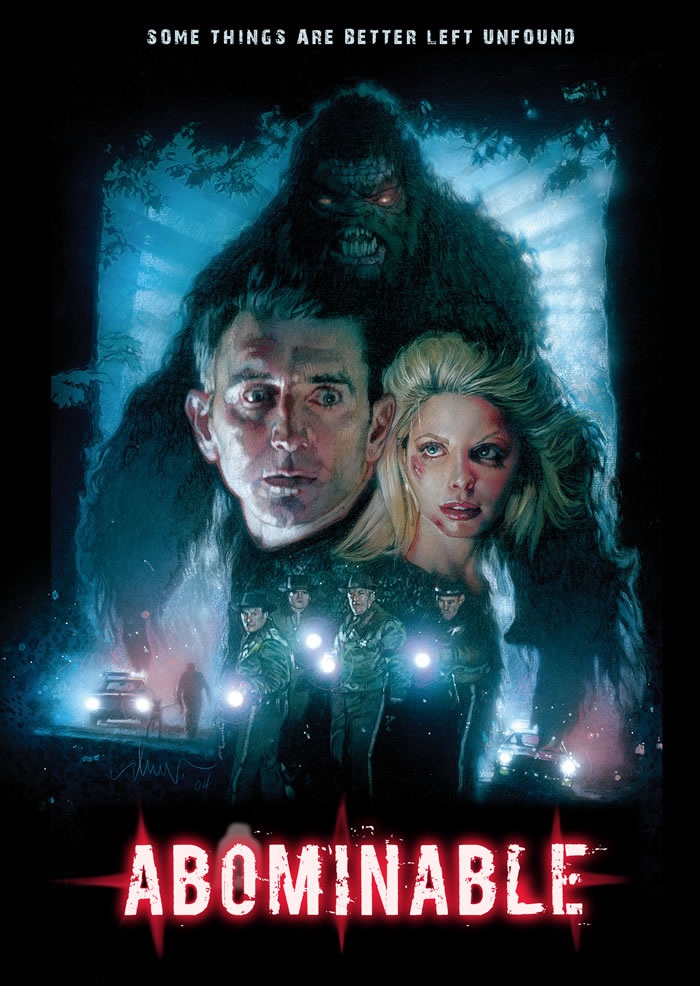 I had heard good things about Ryan Schifrin’s ABOMINABLE. The director/screenwriter/comic book writer wrote THE DEVIL’S HANDSHAKE and elaborated on the characters in a short last year called NO REST FOR THE WICKED, so he was a writer I was familiar with. Though most of the stuff you’d see on a Saturday afternoon on SyFy I wouldn’t wish on my least favorite uncle, ABOMINABLE proved that every now and then, those types of films can work. 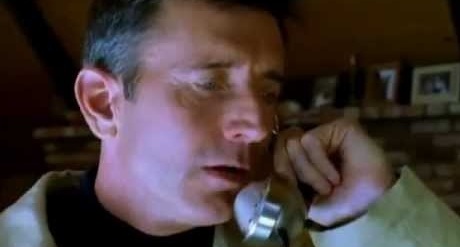 Schifrin incorporates a few elements that elevate this film above the level of most Bigfoot films. Shades of REAR WINDOW come through as Matt McCoy, who replaced the Guttenberg when he left the POLICE ACADEMY movies, plays a writer in a secluded cabin in the woods. Because of an earlier accident, he is confined to a wheelchair and resorts to watching the world happen around him through a pair of binoculars. When he starts seeing a hairy beast roaming the woods around his cabin, he tries to convince folks he’s not crazy, but of course, they don’t believe him and finally think the crippled kook has lost his marbles.

Enter a quintet of buxom babes renting out the cabin next door, and Schifrin plays up the creepy voyeur vibe a lot with the women skeeved out when they see him toting around binoculars. And with Tiffany Shepis being one of the babes, I don’t blame McCoy for getting a little peepy tommy. This sets up some nice scenes filled with tension as McCoy serves as the audience, shouting out when he sees the creature looming in for the kill and can do nothing about it from his wheelchair. Schifrin does this just enough times to make it believable. One more scene of McCoy screaming with binocs up to his face would have teetered into parody, but it stops shy of that.