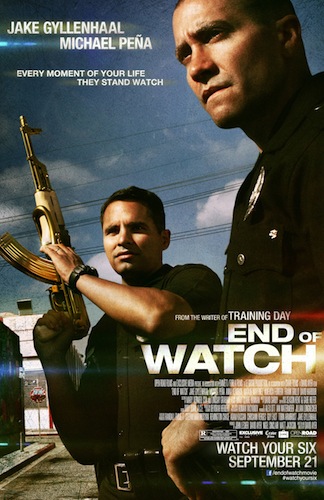 Anna Kendrick sure does love to work. Just over the past year, she cameoed as Jessica Stanley in the first half of THE TWILIGHT SAGA conclusion, appeared in a supporting role in the romantic comedy WHAT TO EXPECT WHEN YOU'RE EXPECTING and voiced the character of Courtney Babcock in LAIKA's PARANORMAN... and she's not done yet. She still has a small role in Robert Redford's new film THE COMPANY YOU KEEP still to come, in addition to her starring turn in the musically inclined PITCH PERFECT.

Right now though, she's got END OF WATCH on her docket, playing Janet, the love interest of Jake Gyllenhaal's Officer Brian Taylor, which allows us to see a personal side to our police officers, giving us a glimpse into the family life that awaits them when they're off the job. Kendrick's part helps draw a distinction between cops and the people who are them when they aren't wearing the badge, and it lends the film a general sense of humanity in showing that there is more to them than just enforcing the law.

I'd spoken with Anna before when she was out promoting 50/50 last year, and for as smart and quick as she is, that makes her a bit of a tough conversation. She's very careful with her words and extremely succinct, which doesn't typically lead to too much back and forth. She knows exactly what she wants to say with her answer, and that's about all you're going to get. There's nothing wrong with that. That's just how she rolls.

I was able to get some time with Anna Kendrick while she was up in Canada for the Toronto International Film Festival, which gave me an opportunity to talk END OF WATCH with her, as well as PITCH PERFECT,  THE COMPANY YOU KEEP, RAPTUREPALOOZA and DRINKING BUDDIES. And, of course, I tried to pry whatever info I could from her regarding the rumors of her potential casting in CAPTAIN AMERICA: THE WINTER SOLDIER. There was plenty of ground to cover with her as her schedule continues to fill up with interesrting projects, so enjoy... 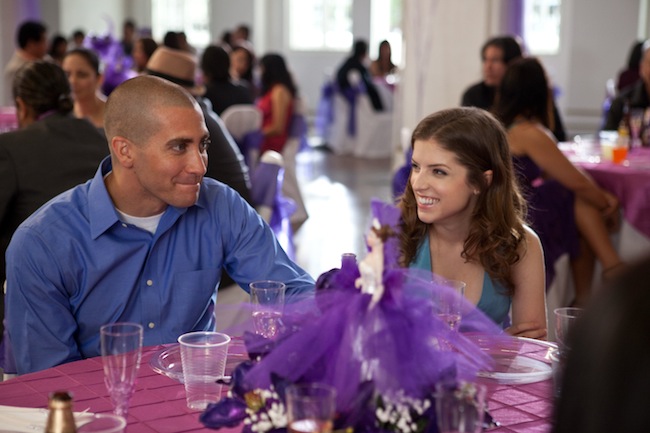 The Infamous Billy The Kidd - Well hi, how are you? How’s Toronto treating you?

Anna Kendrick - It’s been great so far! I love it here, I wish I could watch every movie here. I mean... not just... movies I get to be in, just every movie ever.

The Kidd - [Laughs] Alright, well, let me ask you about END OF WATCH, because the film is kind of able to add a layer of humanity to police officers that we typically don’t see in movies, or generally in real life. That they’re not just cops. They’re husbands, they’re wives, they’re fathers, brothers, etc. What did you learn from doing your research for the film about police officers and how they and their families are able to reconcile what they see on a daily basis in order to have some sort of a normal home life?

Anna Kendrick - Well the really interesting thing for me was when I came to the movie, I felt really underprepared because not only had the guys done a little training and a little research, they’d basically become cops. I remember Jake [Gyllenhaal] talking to a traffic cop and describing all the training he’d gone through, and the guy kind of stopped him halfway through and he was like, “So you’re a cop now, like you’re actually... You’ve done everything you have to do.” So, obviously, that level of preparation was kind of intimidating, and when I came in, it actually ended up being this really beautiful thing where it was sort of a life imitating art situation, because we got to shoot chronologically, and when I came in, it really felt like Jake and Michael [Peña] were people who were fully entrenched in this world, and that they had this long standing relationship, and because of the naturalistic style of filmmaking, I got to really just react to that, and feel a little out of place, and feel a little naive, and even envious of the relationship that they had. And I think in turn, that made Jake extra protective of me, that day and the character and as an actor, and that... The way you would be if you were introducing your new girlfriend to some of your best friends, so it created this really great dynamic, and then as we kept shooting, it felt like every day, for me, but then also for my character, it felt like a new lesson in just how strong I was going to have to be to give my heart to somebody who does this and to start a family with somebody who puts their life on the line.

The Kidd - Did you have conversations with cops girlfriends or wives about...?

Anna Kendrick - No, I didn’t get to... that’s what I mean. I was filming two other movies at the time and so I came in feeling like I’d kind of screwed myself, but that’s what I mean, I think it worked out perfectly. Sometimes that kind of thing happens for a reason because I think it just would have gotten me into a different head space where I’d be thinking “Okay, how do I exhibit the qualities that i found to be present in these families,” when actually Janet is just figuring out how to do that herself, and comes in, and is constantly realizing what this is. The scene in the wedding, when Michael Peña is giving this speech about how you have to be strong to be a cop’s wife, and the way that everybody on the force becomes part of your family. You know, I really was feeling that so much, and looking around at the crowd and being kind of humbled by the fact that I was being accepted into this family. All of that felt so real and so immediate. It actually ended up working out really well.

The Kidd - Between END OF WATCH and also PITCH PERFECT which is coming out, we’re getting to see more of your musical skills. I know you have a background in doing musical theatre, but how much preparation went into the singing scene in the car? Did you have a choice as to what it was you wanted to work with?

Anna Kendrick -  Well I’ll tell you how much preparation went into that. Zero percent! That was on the... We were doing this road trip to Vegas, and the idea was to shoot something once we got to Vegas. Dave [Ayer] was in the back with his camera, and he was just shooting out the window sometimes, and we’d just have conversations, whatever, just passing the time, like we were on a road trip. It was just Jake driving, me in the passenger seat, Dave in the back, and that song came on Jake’s iPod, and Jake and I realized that we both knew it by heart and we started singing, and Dave very stealthily put up his camera and started filming us. And at a certain point we realized that he was putting us on film, and we were, “Okay, so we’re Janet and Brian now, not Anna and Jake,” and that’s in the movie. It’s not like he said, “Okay, can you guys start the song again and do that again, that was great.” It was just that it happened and now it’s in the movie. The music supervisor was just... breathed a sigh of relief that we could clear that because I think Dave really wanted to use it.

The Kidd - So is hip hop more your forte?

The Kidd - [Laughs] And with that, too, how much work went into the wedding dance, and how much of that did you just wing?

Anna Kendrick - We had a couple rehearsals for that at lunchtimes, when we were filming other stuff, and Jake kind of pouted his way through those rehearsals. We were a little concerned about it. And it was weird, because David was the one who was like... thought this was a great idea, and it was the only time I thought he’d be really dorky where he thought this was the most adorable thing. But I think that because Dave is such a kind of hard ass, the idea that he could be excited about something like this... That convinced me that somebody like Brian Taylor could be excited about something that’s kind of silly.

The Kidd - You’re pulling double duty at TIFF this year, between END OF WATCH and THE COMPANY THAT YOU KEEP. Can you give me... Or tell me about your experience of working on a Robert Redford film?

Anna Kendrick - Yeah. It’s a really small part, and I... We managed to get the filming period down to something like three days, and at a certain point... Again, because I had this crazy schedule at the time, at a certain point, my agent was like, “You know, you don’t have to do this. You don’t have to kill yourself to make this work.” And I was like, “I do! I do have to kill myself to make this work.” You know, because if Robert Redford had asked me to bring him coffee on a set, you’d fly to do something like that. I was just really thrilled to have that opportunity.

The Kidd - Have there been any discussions about any progress being made or is it still just kinda trapped in limbo?

The Kidd - I know that you also just finished shooting DRINKING BUDDIES, which has a very improvisational style. How different is it to go into a film like that as opposed to having something completely laid out on the page and is it tough to be able to hang with your cast at times in order to make the material work?

Anna Kendrick - Interestingly enough, I think that END OF WATCH was sort of like my training wheels for DRINKING BUDDIES. Because even though we had a fully script for this, we improvved almost constantly. I think David knew the story that he wanted to tell, and had planned it out really beautifully, so there’s only a couple moments in the finished film of improv. But going into DRINKING BUDDIES, I never saw a single piece of paper, so it was really intimidating to come into, but it was also kinda the perfect blend of really cool, talented people that you knew that you could count on, but also people who’d never done anything like it, so it didn’t feel like I was going into a movie with Greta Gerwig and I was just going to get... you know, get creamed by her. It was like, a lot of people taking a risk together, and that made the environment feel really safe.

The Kidd - One last question for you. I’m sure that you’ve heard all of the rumblings of your potential involvement with CAPTAIN AMERICA: THE WINTER SOLDIER. How much truth is there to that, and is there any possibility that you’ll be joining the Marvel Movie Universe?

Anna Kendrick - All I know is that I can’t really say anything. Sorry, man.

The Kidd - That’s okay, I have to at least ask. Thank you very much.

END OF WATCH opens in theatres this Friday, September 21.