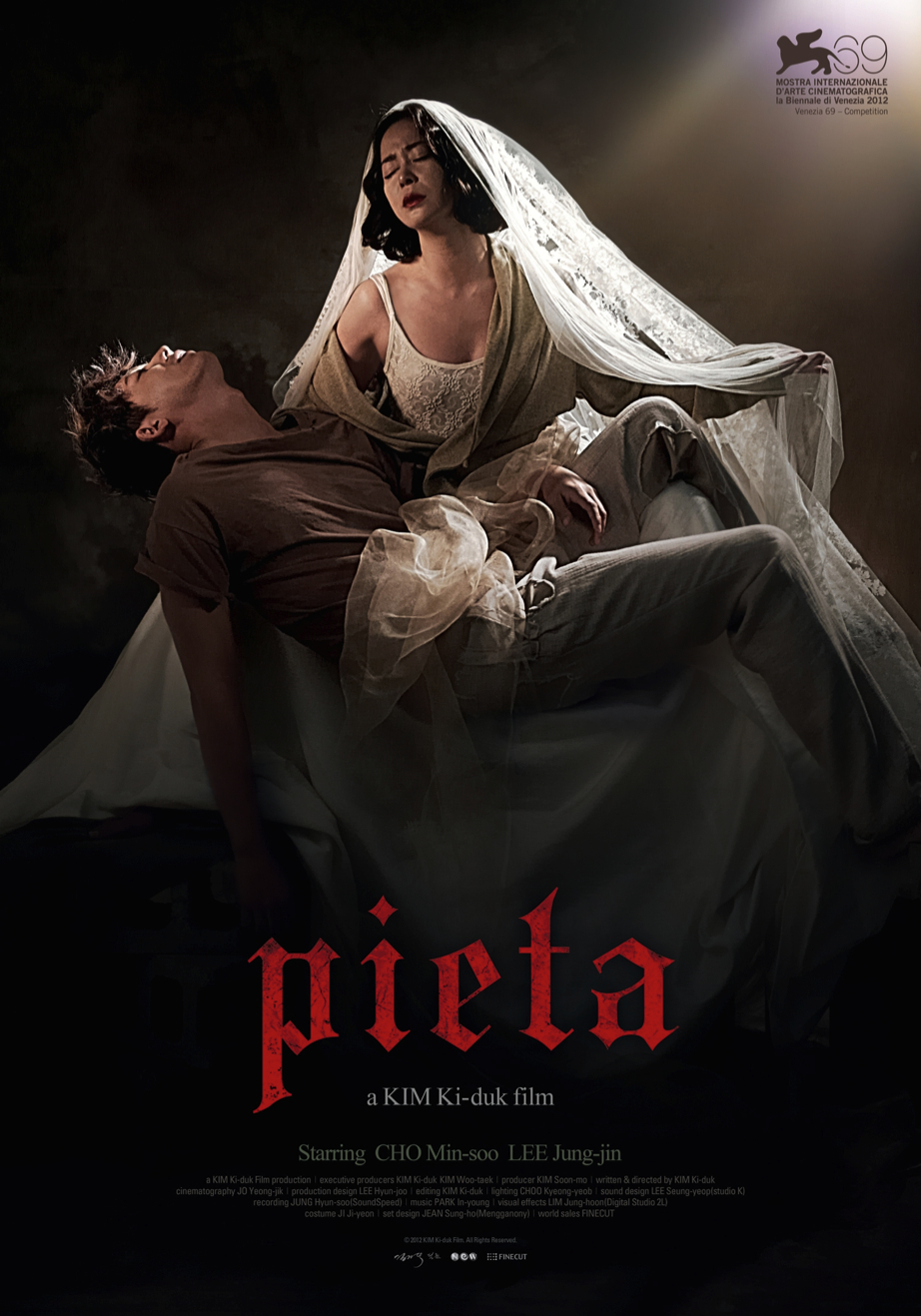 PIETA, a film by subversive Korean master Kim Ki-duk was one of the most powerful and haunting films I saw at this year’s Toronto Film Festival.  It won the Golden Lion in Venice, and rightly so, even if it only squeaked in because THE MASTER had already won its quota of awards.

Kim Ki-duk was said to have been inspired by Michelangelo’s Pieta, his sculpture of Mary holding Jesus’ body just after the crucifixion.  As Anton Sirius said in his preview of TIFF 2012, “Wherever you think that set-up might go, I can pretty much guarantee it’s going to go somewhere else.”  He was actually talking about this film being about a loan shark who is reunited with his long-lost mother, but it doesn’t matter, his quote is true in any context -- trying to figure out Kim Ki-duk is like trying to figure out a tornado.  He’s an unpredictable force of nature, at once both horrific and sublime.  You can’t tell where he’s going to go, but when he gets there, it seems like it couldn’t have happened any other way.

In this PIETA, Lee Kang-do (Lee Jung-jin) is the (grown) child.  He’s a loan shark, and an especially nasty one.  When his victims can’t pay, he cripples or maims them (usually with their loved ones watching), and takes the insurance payout.  This wrecks their lives in nearly every conceivable way, as nearly all rely on manual labor to make a living.  Several of his victims are so ashamed and destroyed that they commit suicide.  Despite wrenching pleas for mercy, Lee Kang-do never displays even an iota of compassion.  He seems inhuman, and alone -- he has no friends, and no family.

That is, until a strange woman (Cho Min-soo) shows up, claiming to be Lee Kang-do’s mother.  She says she abandoned him at birth, when he was very young, but now she feels responsible for the wake of destruction he’s leaving.  Lee Kang-do, utterly incapable of compassion, rejects her and even rapes her as a kind of test, but she stays anyway, even going so far as to help him commit atrocious acts of violence.  Meanwhile, some of Lee Kang-do’s victims are out for revenge, and everything is headed for a final showdown.  I told you -- this is about as far from the Jesus and Mary story as it is possible to get.

The atmosphere of the first hour or so of PIETA is suffocating -- the sheer amount of depravity is hard to take.  And in addition to the mutilation, rape, and killing, we get images like doomed eels slithering down stairs, blood on the streets, and the heads being chopped off of animals prior to cooking.  Still, this isn’t imagery for mere shock value, it is all going somewhere, and if you can make it through to the end, there is a payoff.

To say more would give away too much, but there are several twists, even leading right up to the final two shots of the film.  Going into the last shot I was thinking that this is an interesting film, but I wasn’t sure it was worth the gut-wrenching setup to get there.  But when that last shot hit, it is like a punch in the stomach, and only then do you realize that this is a masterpiece.  Everything flips, and suddenly, Kim Ki-duk has achieved the seemingly impossible.  He’s put you through a horror show of human suffering as a perverse meditation on vengeance, compassion, redemption, and, remarkably, the love between a mother and son.  It is simultaneously the antithesis of, and the embodiment of, Jesus and Mary story after all.