Update – Now with pics! AICN COMICS Q&@: Russ Sheath talks with DANGER GIRL / GI JOE artist John Royle about his work pencilling some of comics most iconic characters! Plus a preview of issue #2!!! 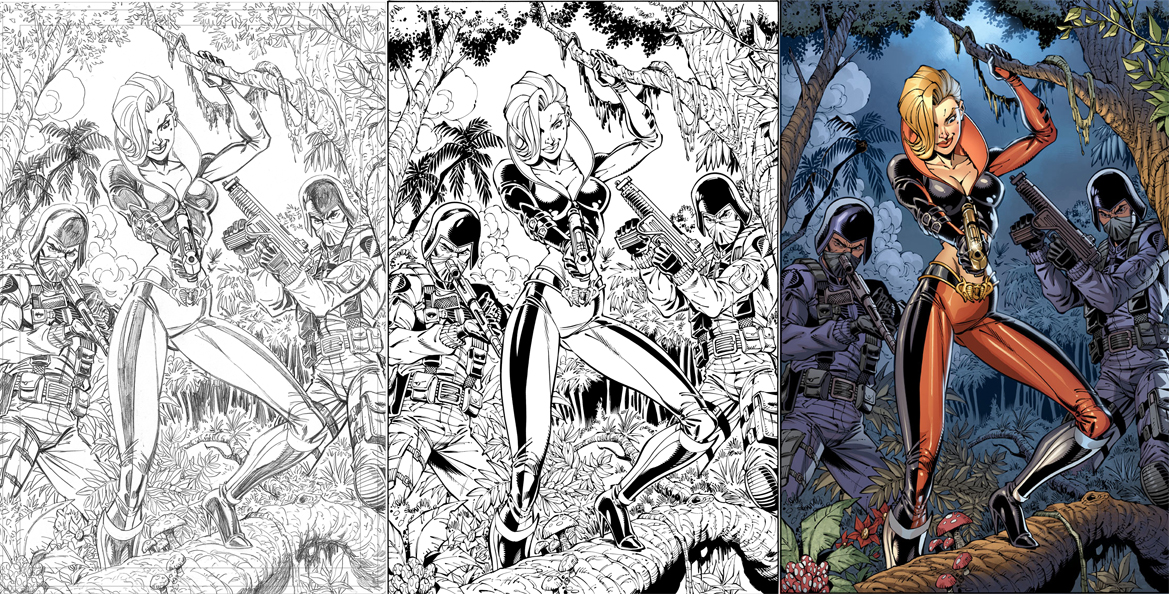 Russ Sheath here. DANGER GIRL / GI JOE # 2 from IDW hits comic stores this week. Written by DANGER GIRL co-creator Andy Hartnell and pencilled by British artist John Royle, DG / Joe see's the Joes once again in battle against the forces of Cobra who have an unusual ally in the shape of Danger Girl, Abbey Chase. Royle has worked alongside Dave Gibbons and Dan Jurgens on Stan Lee's Alexa adaptation as well a host of titles for Marvel and DC is a well known face in comics in the UK. Taking time out to speak to AICN Comics Russ Sheath John Royle talks about his career and how was offered the job working with Danger Girl creators Andy Hartnell and J.Scott Campbell.

RUSS SHEATH (RS): John - Congratulations on the reception DANGER GIRL / GI JOE # 1 has received, comic readers and DG fans alike seem to really like the book. Tell us how DG / Joe came about for you? 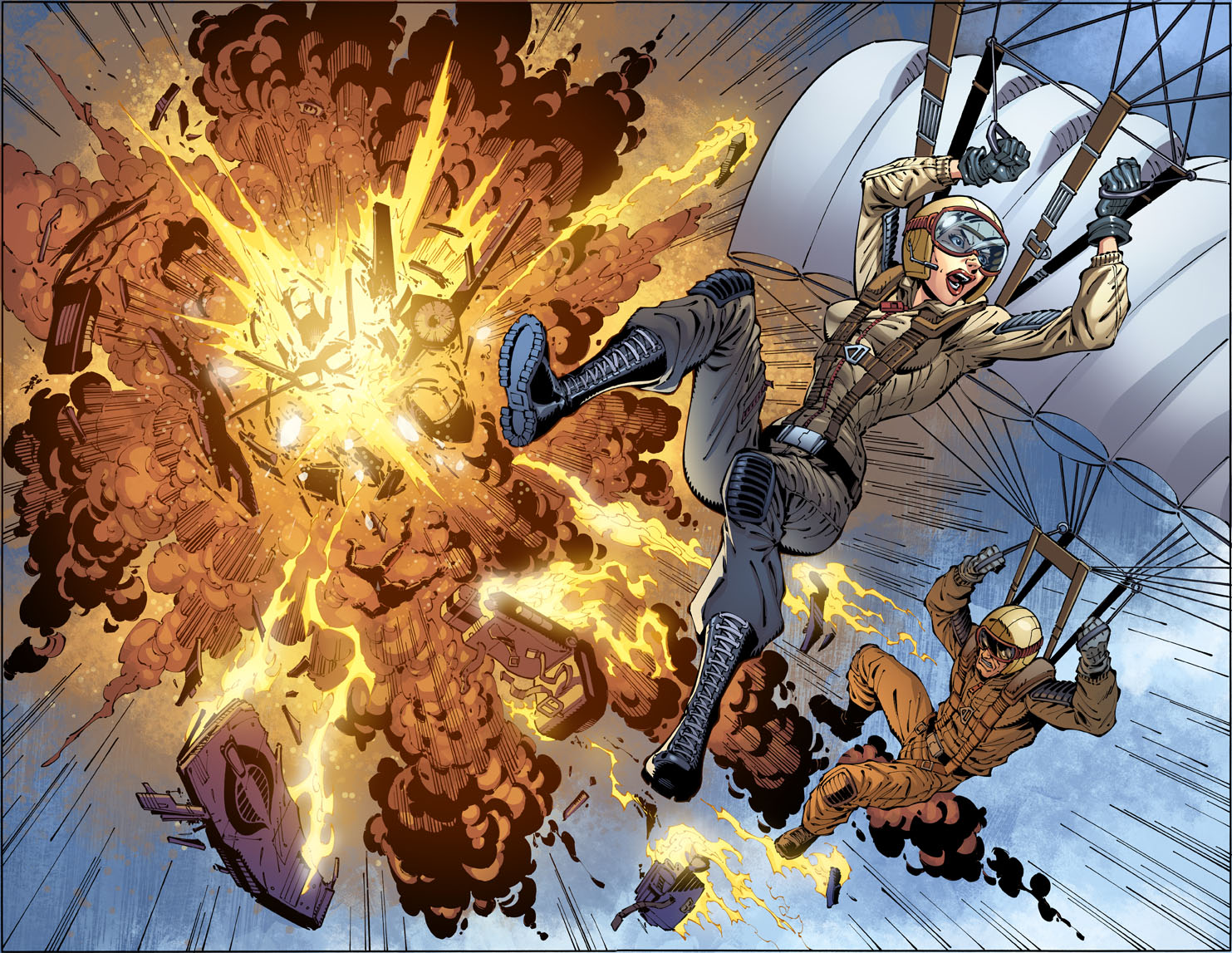 JOHN ROYLE (JR): Scott Dunbier had got hold of my details and called to see if I was free and interested in drawing the project. Of course I was thrilled and jumped at the chance to pencil the series, DANGER GIRL is an all time favorite series of mine! It was funny as I had recently done a few sexy Bond/Danger Girl type women in poses for scene themes for sale on the PS3 shop thinking how much of a dream job for me would be to work on a DANGER GIRL series.

RS: For those who are new to your work and want to find out more, can you tell us a little about your career and yourself? 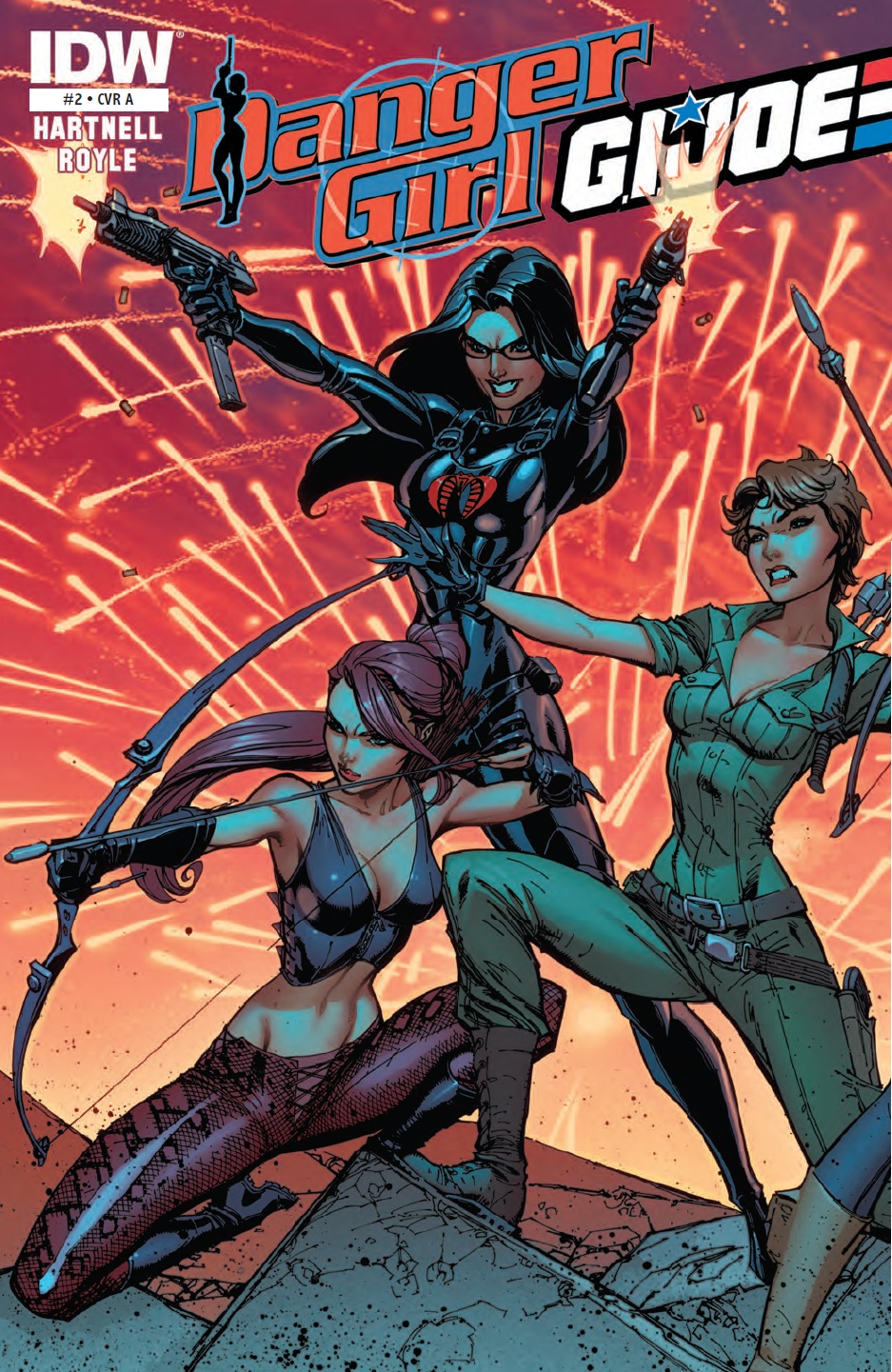 JR: I got my break into comics at Marvel UK pencilling KNIGHTS OF PENDRAGON and DEATH’S HEAD /DIE-CUT. I then went to work for MARVEL USA on such titles as EXCALIBUR, WHAT IF ROGUE, WOLVERINE & STAR TREK: STAR FLEET ACADEMY. I've also worked for numerous publishers including D.C Comics ,Malibu and Panini. In recent years I've pencilled many issues of SPECTACULAR SPIDER-MAN and MARVEL HEROES for Panini in the UK plus provided illustrations for magazines articles, covers and advertising campaigns.

RS: For fans who have discovered your work in Danger Girl / GI Joe, where can they find your previous work?

JR: My work can also be seen on my website www.johnroyleart.com. 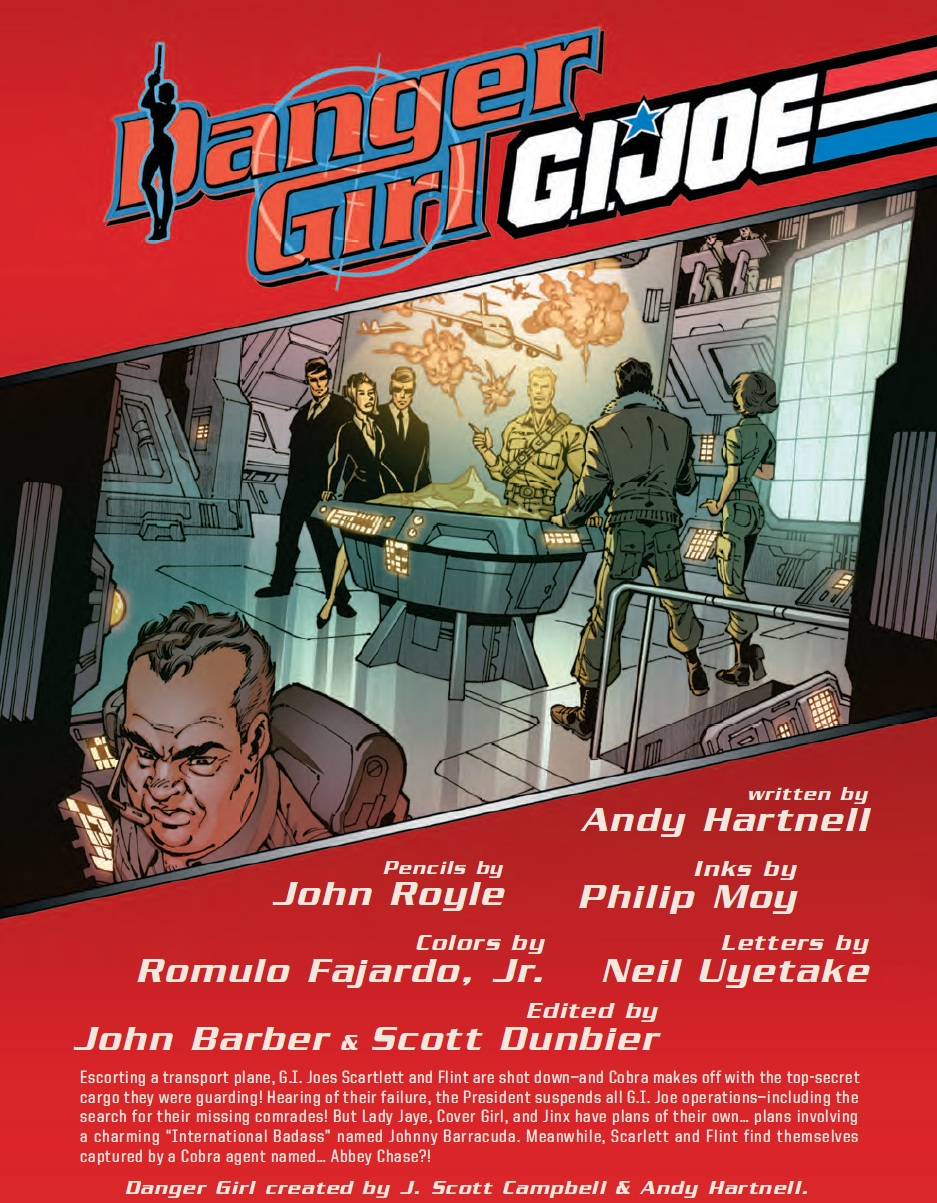 RS: GI JOE, of course, has a huge following being in its 30th year of existence and DANGER GIRL was a smash hit with, arguably, the biggest non-founder creator to come out of the Image stable of the 90's, namely J.Scott Campbell - were those big shoes to step into?

JR: Oh yes!!! I was so excited to get the gig with Andy on board as writer and then I had to swallow hard at the scary thought of following fan favorite J.Scott Campbell on such a much loved series. Thankfully the reaction to issue 1 has been wonderful and I'm thrilled the readers are enjoying what Andy, Phil , Rom & I are doing. 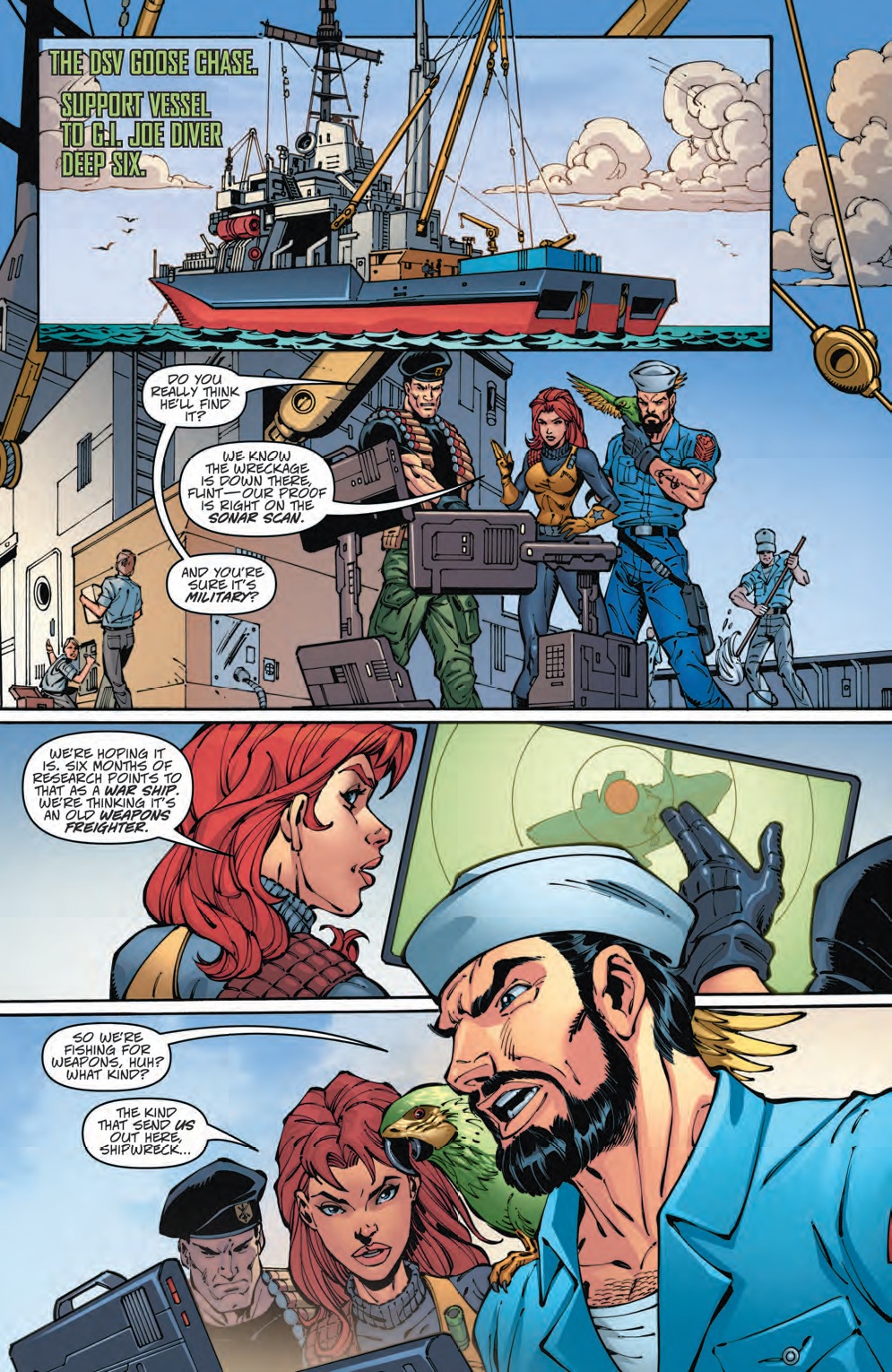 RS: Your artistic style for Danger Girl / GI Joe...there are certainly some echos of J.Scott Campbell there but it retains a style that it is distinctly unique. Was there a conscious effort on your part to make this book, artistically, close to JSC's style? Is your natural style of pencilling close to Jeff's anyway?

JR: To some extent I did want it to have a feel of Jeff's style, I'm a huge fan and his style is defiantly an influence on me. But, it also wouldn't feel like I was drawing the characters I love so much if they didn't have a look of J.Scott Campbell characters in the style. My natural style also has a few similarities to Jeff's original DANGER GIRL work. I love the look of that period of his work and I also loved Alex Garner's inks. There's something about the finish that reminds me of the Classic Byrne/Austin X-MEN run which was also a huge influence on me when I started pencilling. 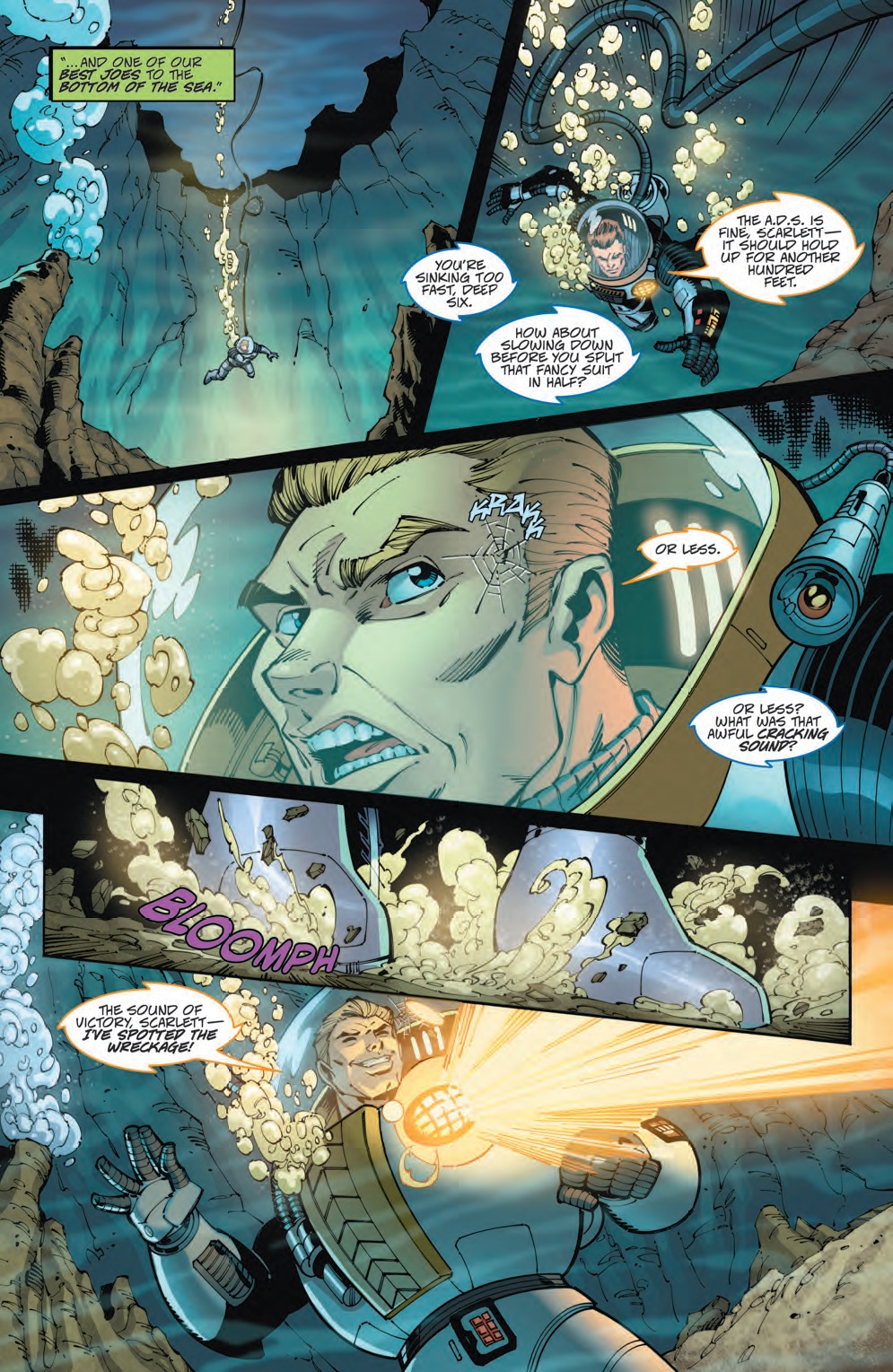 RS: DANGER GIRL has a relatively small cast in comparison to GI Joe's cast of hundreds, have you been thrown any challenges or obscure Joes to pencil that you had to research?

JR: It's been hard at times as there so many characters I don't know in the GI Joe universe and have not drawn them before. For most of the reference I owe Andy to huge thanks for kindly sending it to me. He knows the Joes inside out and It's a big help to show me which costume he has in mind as many of them have lots of different version over the years.

RS: Interestingly you weren't aware of GI Joe prior to working on a movie tie in book, is that right? 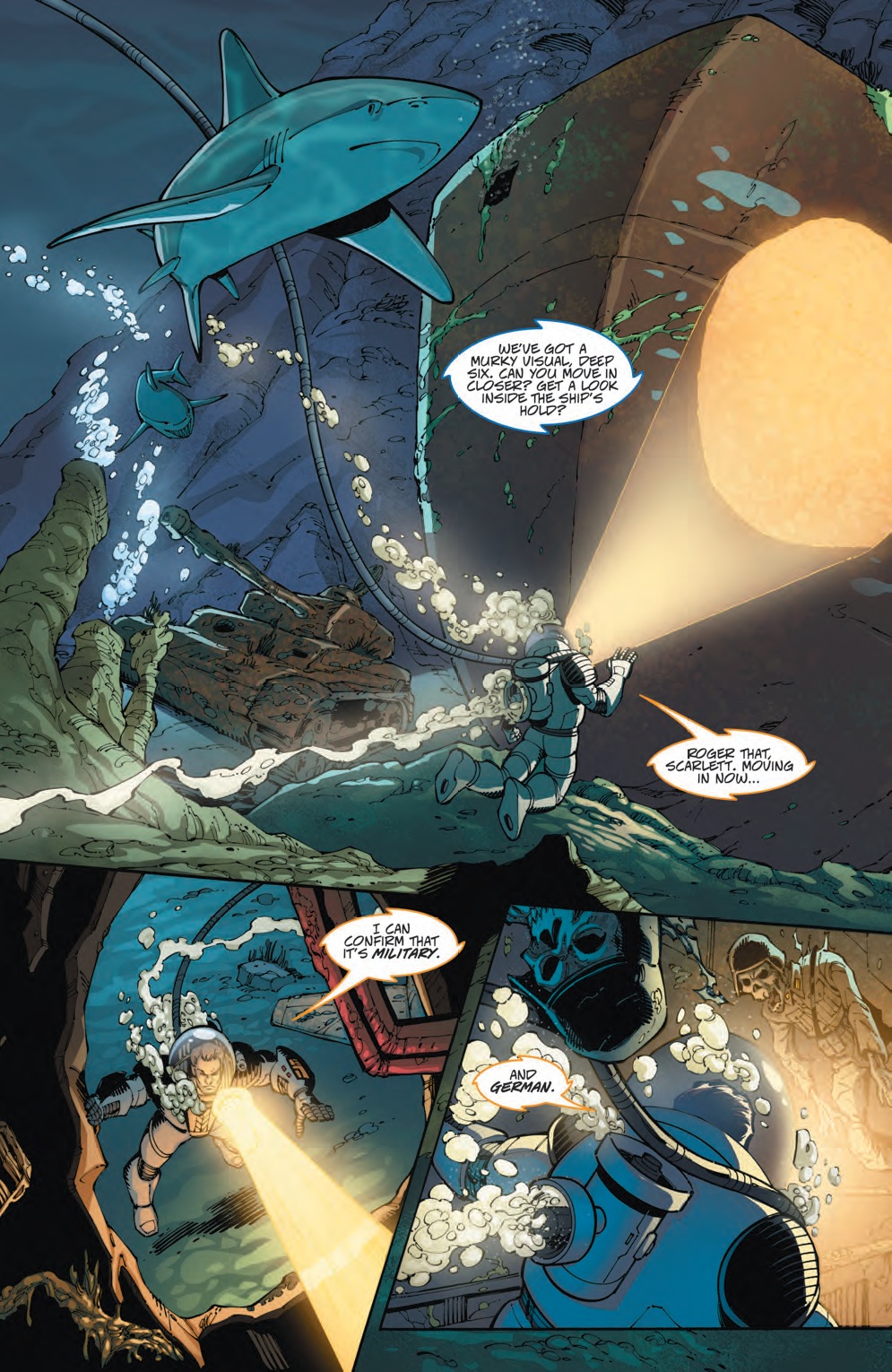 JR: Yep, I hadn't heard of it 'till I pencilled the first two issues of a GI Joe series for Panini that came out around the release of the first movie. I suppose because I'm from the England I didn't see it on TV or read it as a kid. I was firmly brought up, mainly Marvel Superhero characters such as the X-Men, Avengers, FF, ALpha Flight and D.Cs Teen Titans, Superman and Crisis.

RS: Did you know of Danger Girl prior to working on this book?

JR: Yes, It really is one of my all time favorite series!! I have read it many times over the years. The oversized reprint is lovely.

RS: Who are your artistic influences and which comics influenced you to do what you do? 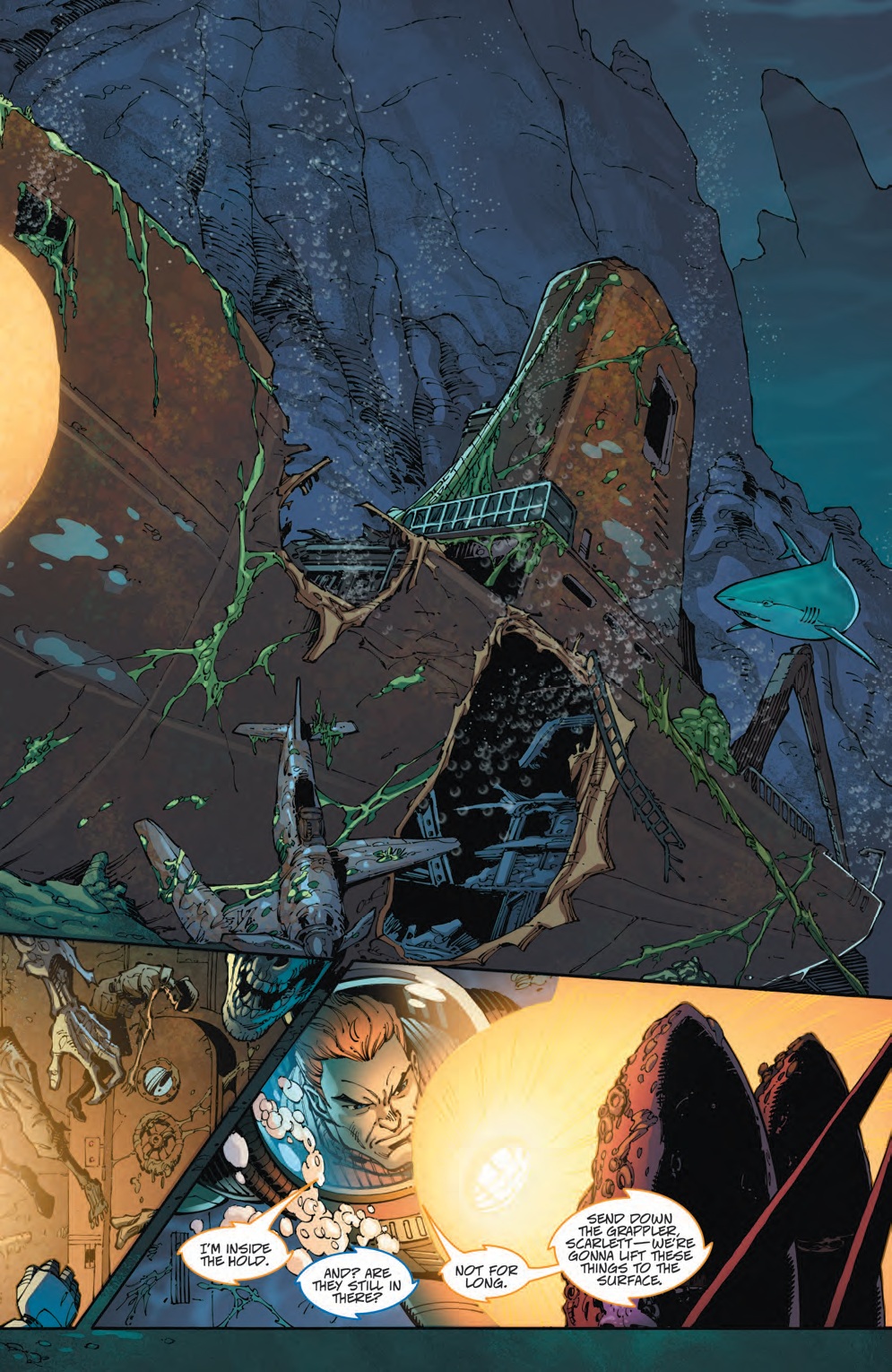 JR: The cover that first made me pick up a comic was an old Marvel UK reprint book from the original run of UNCANNY X-MEN #50 featuring Lorna Dane with X-Men below her. I picked it up and was hooked. Another big influence on me when I started drawing was John Byrne's X-Men, FF's and Alpha Flights. Still till this day Byrne/Austins X-Men are some of my favorite X-Men works. I have been enjoying his work at IDW. NEXT MEN and COLD WAR have been a great read. I also really enjoy Alan Davis, George Perez, John Romita jr, Joe Madureira and Arthur Adams work.

RS: You are working with DG Co-creator Andy Hartnell and the book has covers by J. Scott Campbell, both of whom are huge GI Joe fans, how's it been working with those guys? Did they offer any words of wisdom when working on their characters? 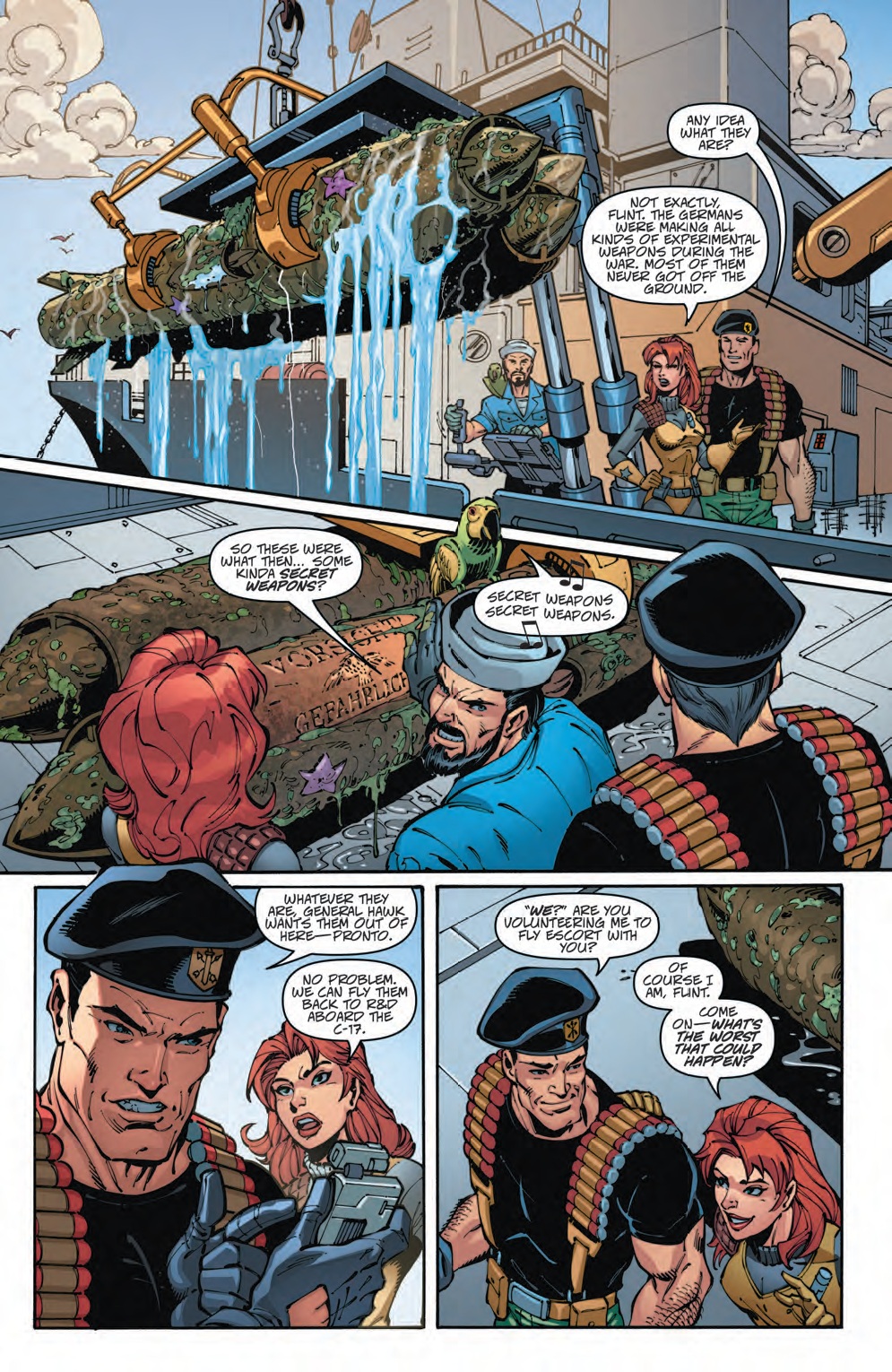 JR: I've only worked with Andy who has been amazing and very enthusiastic about the artwork so far. I did feel nervous at the thought of working on the series but Andy soon made me feel relaxed and at home. The reviews for issue one have been cool and I hope that the readers enjoys issue 2, It's a roller coaster ride. Andy's scripts are great fun and a lot of the cool things people have mentioned are down to his writing. I must also give credit to Phil Moy and Rom Fajardo who have been doing fantastic jobs on inks and colours! I have worked with Phil many times over the years, I think the first thing we did together was an EXCALIBUR issue and I always love the finish in his inks, he's up there with Austin and Garner to me.

RS: Do you have any favourites amongst the Joe or DG characters thus far? 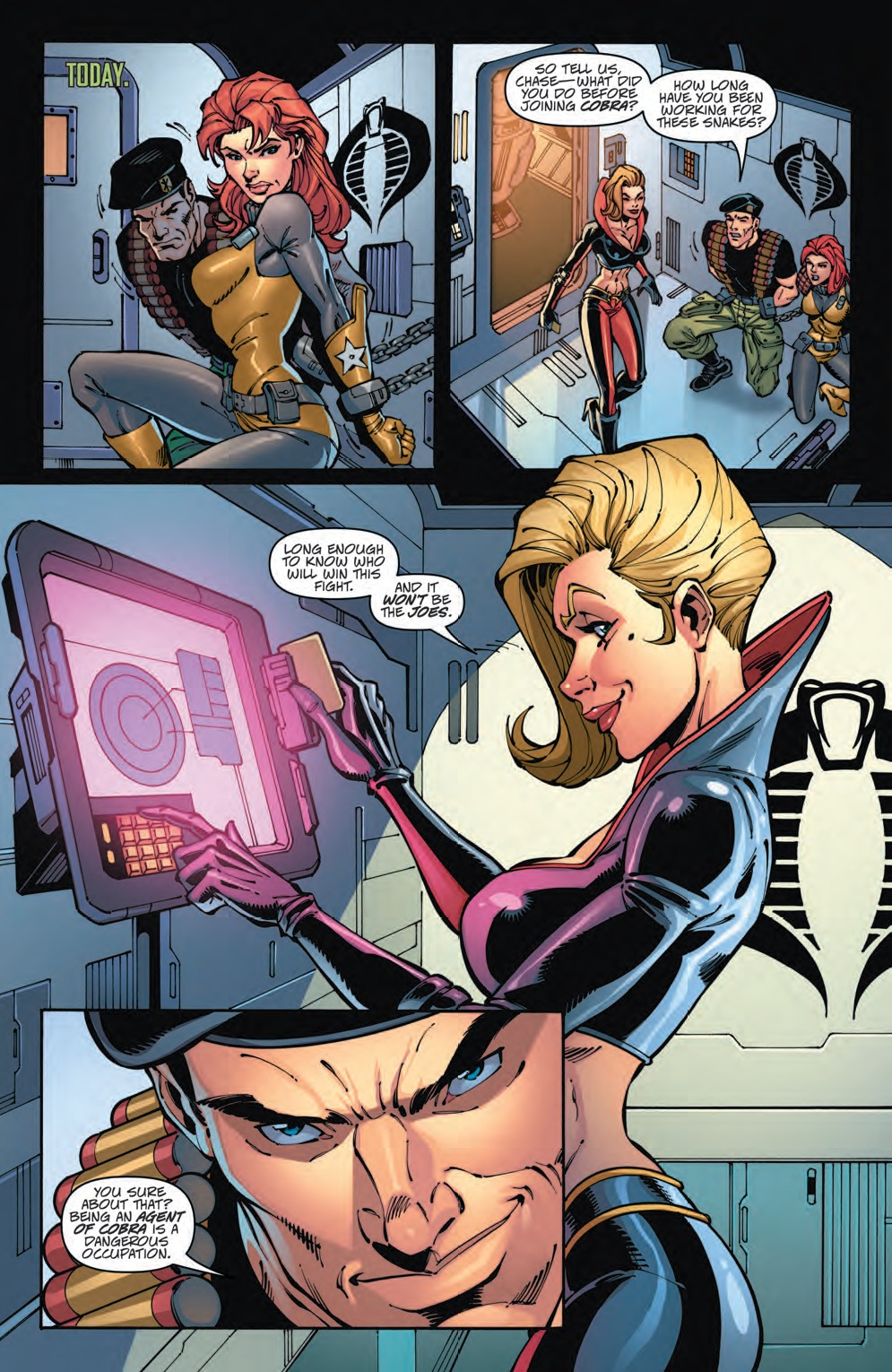 RS: Have there been any scenes, characters or moments that you have particularly enjoyed drawing or where you have asked yourself 'how the hell am I going to draw that'?

JR: I enjoyed many scenes, mostly the ones with beautiful ladies involved! There's a double page scene coming up in Issue 3 that has many characters and it took 3 days for me to pencil, I'm pretty happy on the whole with the end of Issue 3 that I've just pencilled but I can't give anything away. Page 21+22 are some of my favorite pages so in the series. 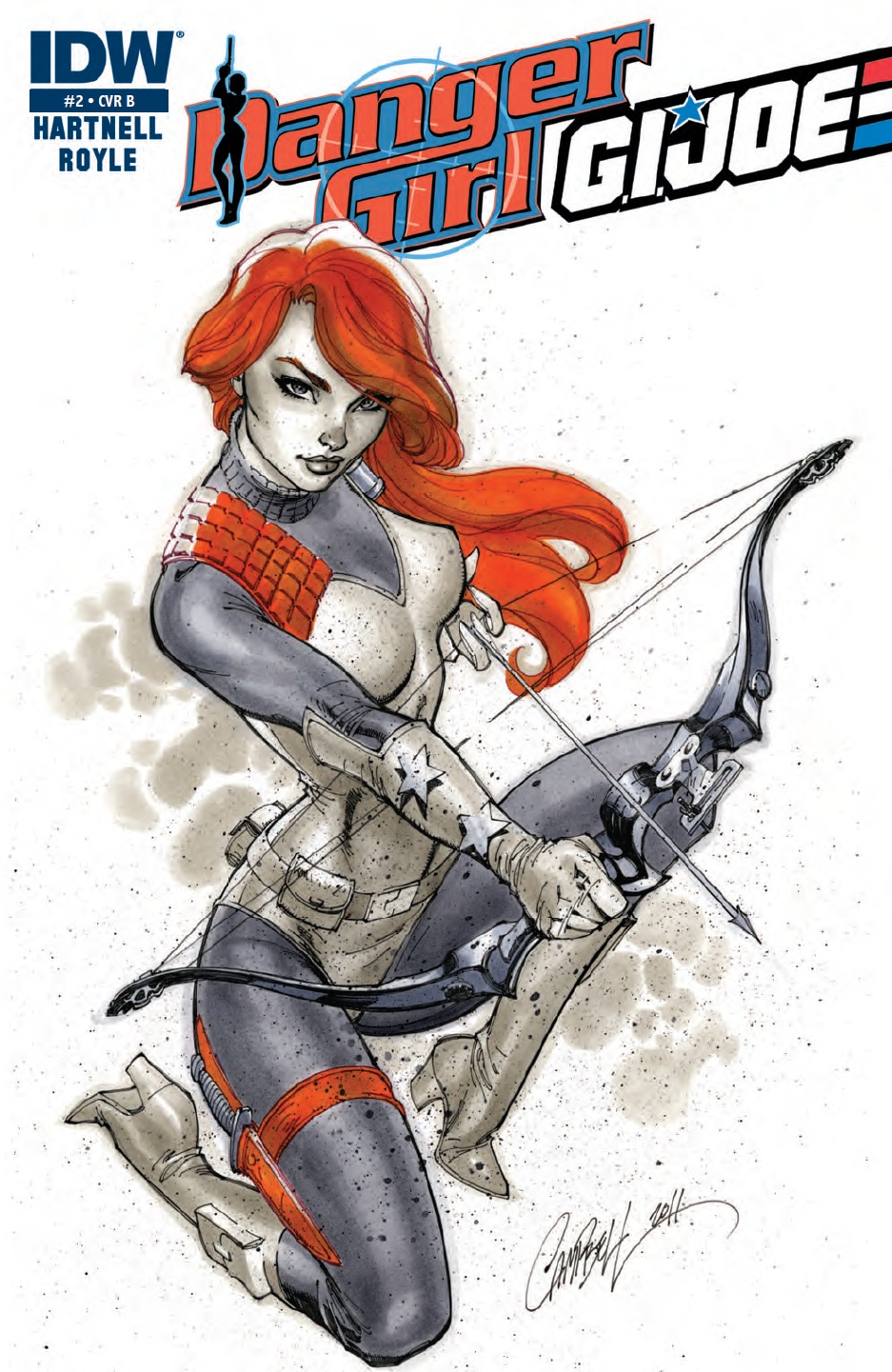 RS: Would you like to return to the Danger Girl or GI Joe worlds again, following this team up?

JR: I would definitely like to do another DANGER GIRL series and then possibly another team up with GI Joe. I would like it to be with the full Danger Girl crew but with a smaller Joe team of 5 or 6 G.I.Joes so I can really get to know the Joe characters artistically.

RS: A huge thanks to John for taking the time out to talk to us and to John Barber and Scott Dunbier at IDW. DANGER GIRL / GI JOE is in stores this week!