AICN HORROR looks at TOAD ROAD! ZOMBIE A-HOLE! THE SCAR CROW! A DAY OF VIOLENCE! HELL! A look back at BLACK MAGIC RITES! Plus…change your drawers after watching MAMA!!!

Logo by Kristian Horn
What the &#$% is ZOMBIES & SHARKS?
Greetings, all. Ambush Bug here with another AICN HORROR: ZOMBIES & SHARKS column. Before we dive into the new horrors of the week, I have a few newsbits of interest.

First up, we have the winners of the Kino Lorber / Redemption Contest from earlier in the week. Congrats to the five readers listed below; you will be receiving copies of Redemption re-releases of BLACK MAGIC RITES, TWO ORPHAN VAMPIRES, and LIVING DEAD GIRL.

Congrats to the winners and thanks to all involved. Look for reviews of these films in future AICN HORROR columns and you can pick up your own copies of the films in BluRay or DVD by checking out Redemption’s website!

Andrew Traucki has been a busy guy since the release of his last film THE REEF ( which I loved and reviewed here ). His entry in THE ABC’S OF DEATH is playing with the rest of the film at the Toronto International Film Festival Midnight Madness on September 14-16. Traucki also just finished principal photography on his next project, THE JUNGLE. Here’s the official synopsis; the story of an Australian Leopard conservationist who ventures into the remote Indonesian jungle with his documentary filmmaker brother; to investigate reported sightings of an endangered species of leopard. Their trek into the jungle becomes ever more bizarre and sinister - with the realization they are being stalked by a deadly unseen predator. I can’t wait to check out both of these projects from this truly talented director.

FILM4 Frightfest is also upon us, if you’re in the UK that is. The Pierce Brothers, the writers/directors behind the zombie comedy DEADHEADS (which I reviewed here) are premiering their new short horror comedy, SMUSH! at FILM4 FrightFest tomorrow. I truly enjoyed DEADHEADS and found it to be a nice mix of gore and humor. Find out more information about FILM4 FrightFest here!

FILM4 FrightFest will also have the premiere of Ryan Haysom's much talked about short YELLOW which drips of Italian Giallo in so many good ways…or so I’ve heard. Haven’t seen this one yet, but if you’re over in the UK, you can see it on Saturday at 3:30pm at FILM4 FrightFest!

One of my favorite films of last year, INBRED (reviewed here) can also be seen at FILM4 FrightFest this Saturday at 1:00pm! So don’t say I never warned ya!

Closer to my home, if you’re in or near Chicago and are a horror fan, you probably already know about the Music Box Theater. This year, they are once again doing their 24 Hour Music Box of Horrors Movie Marathon on October 13-14! Films showing will be THE BURNING, THE GOLEM, CHILD’S PLAY, PHANTASM, THE DEADLY SPAWN, BLOOD DINER, and HOWLING 2: MY SISTER IS A WEREWOLF. THE Sybil Danning and Jeff Lieberman will be there in person. For more information, click here!

Now let’s get on with the reviews! 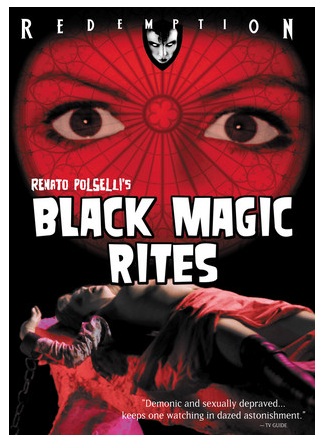 New on DVD/BluRay from Redemption!

A whole lotta moaning turn of the century babes going on. That kind of sums up BLACK MAGIC RITES in a nutshell. Though I can appreciate this film for some pretty stunning cinematography and fancy camera work for its time, story wise, BLACK MAGIC RITES comes up short. Maybe even the story is decent, but with the non actors spouting the lines, it’s kind of difficult to get into. 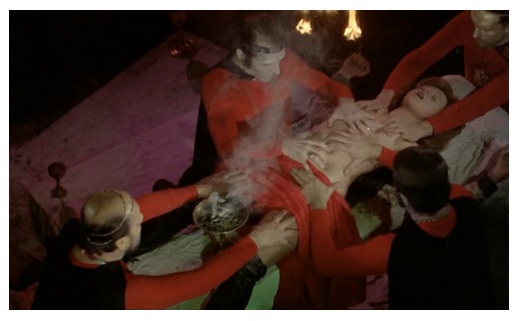 Convoluted beyond belief, the story follows a few maidens in distress. The film starts out with a surreal nightmare as a woman dreams of being tortured by a group of men in red spandex. Though a lot of the films imagery is somewhat horrifying, Renato Polselli tends to linger on scenes of groping cultists and writhing maidens with one or two boobs provocatively peeking out from their torn shirts. Of course there’s a gothic castle. Of course, there are devious things going on behind the scenes. Of course it involves Satan and vampires and all forms of witchery. There’s a lot of contrivance, including a romanticized vampire in search of a mate. But even though this film was made in the early seventies, theater-goers had already seen this sort of thing in plenty of Hammer films. Just because it goes full nude from time to time does not make it rise above most vamp films of the era and before. 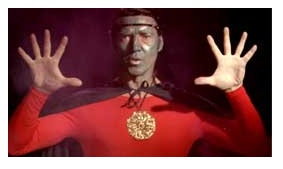 As I said before, what this film does have going for it is atmosphere. Polselli, while having that lingering camera problem, still knows how to stage some gorgeous shots. One in particular takes place at a huge witch burning pit as the witches scream and run in circles as they are engulfed by smoke. Sure from time to time you get the occasional rubber bat and snake, but for the most part, the fever-dream imagery is something that impresses.

Fans of T&A will have a lot to squawk about as every woman in this film (and there are many) either has a sex scene, a torture scene where their clothes are ripped off, or both. Women in this film serve only to have their clothes torn off and made love to. And though the ladies of BLACK MAGIC RITES are easy on the eyes, even the most horniest of horn dogs are going to get bored looking at them in various forms of undress for no apparent reason. Though it’s heavy on the boobs and butts, when it comes to scares, aside from some creepy atmosphere and some middle aged men in red spandex, there’s not a lot of horror going on in BLACK MAGIC RITES.

Here’s the trailer in glorious Italian! 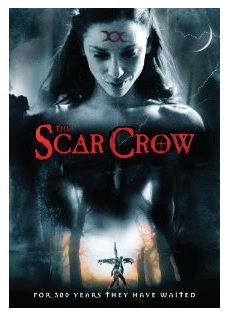 New on DVD from MVD Visual!

Movie two this week is another witch fest. Though this one is much more steeped in horror than the previous one. THE SCAR CROW may be lacking an E in the title, it isn’t lacking in gore. 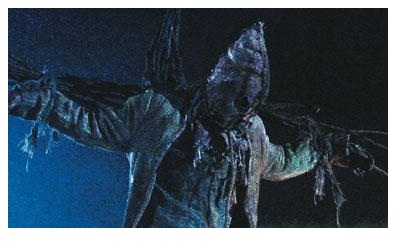 And gorehounds are going to be the ones who are going to be most satisfied with this film. Three young ladies watch their mother being burned at the stake by a witchhunter. Their abusive (both sexually and physically) father both blames them for her death and resents them for their power, all the while feeling them up under the dinner table. One night, the girls had enough and kill their father, but his soul haunts them from the scarecrow in the backyard of their English countryside home. Soon a quartet of dudes happen upon the three girls’ house and in order to appease their father’s unrested spirit, they must tempt and dispose of the boys so they can finally be at peace.

That’s the premise of this one in a nutshell. Though the title suggests another entry in the scarecrow horror subgenre, very little by way of scarecrowing goes on (though there is a gore soaked scene as a scarecrow crawls through a bed a man is lying on and through his body cavity tearing him apart in the process). This is a story about witchcraft. 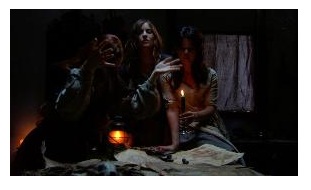 Though the moments of gore are inspired as the three witches dispose of the quartet of boyish goons who show up on their doorstep, there’s a lot of unintentionally laughable moments in this one. The three witches, all of them downright gorgeous, must learn how to cast spells like their mother. How do they do it? Through a musical montage of course. I damn near expected to see the witches running around the back alleys of Philly trying to catch a chicken. There is also some weird time warp thing going on as the boys who show up to be murdified by the trio of Broom Hildas appear to be modern blokes, the witches themselves seem to be out of Medieval Times. The guys themselves are a laugh riot as well. Sometimes intentionally, as they puff out their chests in order to impress these corseted honeys in distress, but other times, as in when they scream like little girls at the top of their lungs, they just seem downright goofy and it’s a relief to see them in line for the chopping block.
Follow aicn
Readers Talkback
comments powered by Disqus
Trending