In Praise of Jean-Claude Van Damme 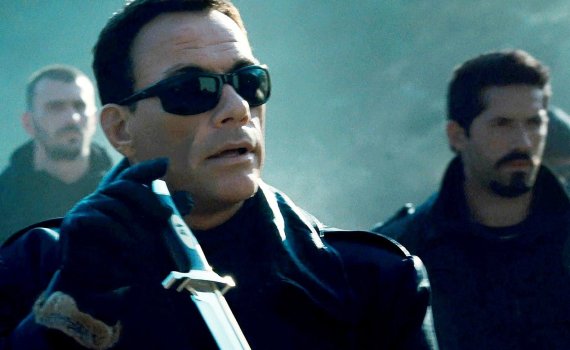 (Apologies for the lack of a Q&A, but my iPhone was highly uncooperative in the recording of this interview. I'm bummed, too. Hopefully, this profile will convey what a pleasure it was to spend fifteen minutes chatting with an action legend.)

Jean-Claude Van Damme has just snapped off four quick punches within an inch of my right temple. He's in a terrific mood, recalling how he landed the role of villainous Russian kickboxer Ivan Kraschinsky in Corey Yuen's NO RETREAT, NO SURRENDER. "I was hungry," he says. He's sporting a devilish grin, and the punches are an exhilarating punctuation to the story. They're also a startling reminder of the phenomenal physical control required to pull off a truly memorable fight sequence. And yet I can't help but wish he'd been just a tad errant on one of those jabs. It's not every day you get to be knocked out cold by one of the top box office draws of the 1990s.

From 1988 to 1998, Van Damme starred in seventeen movies - almost all of which I saw theatrically (I missed THE QUEST, while LEGIONNAIRE went direct to video). Less than half of them are good, but even in the bad movies, Van Damme, between his awesome physical prowess and sheer commitment to the reality of the film (no matter how ludicrous the setup), always gave the audience their money's worth. He also had a goofball charm that set him apart from his primary action-film competition at the time, Steven Seagal. There was an underdog component to it as well: a Seagal movie typically ended with the inventively vicious murder of the antagonist; Van Damme often had to overcome a severe beating to best his enemy. You feared Seagal, but you pulled for Van Damme.

And throughout his struggles over the last fifteen years, I haven't stopped pulling for the guy. As he battled substance abuse, bipolar disorder and other personal demons, I kept hoping he'd pull it together and find a way to recapture that ineffable joy of being onscreen. Then came the unburdening. With one six-minute monologue in the fascinatingly introspective JCVD, Van Damme did something wholly unexpected: he came clean about his personal failings in a way movie stars tend to avoid (at least until they've spun out, slammed into the wall, and disfigured their face to the point where we barely recognize them anymore). Speaking directly to the camera, he breaks down as he acknowledges the wreckage. "When you're thirteen, you believe in your dream. Well, it came true for me. But I still ask myself today what I've done on this earth. Nothing. I've done nothing."

That scene has stayed with me for the last few years, and as I prepared to interview Van Damme, I found myself compiling questions designed to make him understand that the myriad hours I spent watching and re-watching BLOODSPORT, LIONHEART, HARD TARGET, STREET FIGHTER, SUDDEN DEATH, DOUBLE TEAM and KNOCK OFF meant something. Even NO RETREAT, NO SURRENDER, that ludicrous movie wherein a teenage kid learns from the ghost of Bruce Lee how to kick Van Damme's ass, left its mark. Van Damme didn't become an international sensation because of "nothing"; we thrilled to the balletic grace with which he took out Bolo Yeung in BLOODSPORT, and cackled at the self-parodying seriousness of his rallying speech in STREET FIGHTER. In dramatic scenes, he was often awkward, but that only reinforced his charm. Van Damme was an ass-kicking dork, and we loved him for this.

But that dork persona died with JCVD, and it's nowhere in evidence in THE EXPENDABLES 2, which finds Van Damme playing the evil Vilain (yes, Vilain). It's a deliciously garish performance. After dispatching one of our heroes (via knife and crescent kick) much to the chagrin of Barney Ross (Sylvester Stallone), we learn that Vilain has enslaved a rural population in order to make off with some weapons-grade plutonium. The man lives down to his namesake, and Van Damme imbues the character with a venomous flamboyance that's quite unlike anything he's done before. Van Damme is having a blast tormenting Stallone, which sets up a humdinger of a final showdown between the two stars: it's Stallone's brawling determination versus Van Damme's brutal elegance. As an action junkie, I never thought I'd live to see the day.

Van Damme's proud of the climactic fight in THE EXPENDABLES 2, partially because it was his suggestion. Initially, Barney was supposed to chase Vilain to a helicopter, which resulted in a stunt-heavy set-to that might've been unsatisfying for audiences expecting a violent, testosterone-filled conclusion. Instead, Van Damme prevailed upon Stallone to go mano-a-mano, and the two aging superstars get it on with all due gusto. Years ago, when faced with the prospect of losing a fight to Sho Kosugi in BLACK EAGLE, Van Damme lobbied for his bad-guy character to get chopped up by a boat propeller. Thankfully, he's no longer averse to going down kicking when the film calls for it.

Van Damme is animated throughout our interview. Twice he leaps to his feet to demonstrate a piece of choreography, and it's exciting to watch the fifty-one-year-old star display a limberness that shames this thirty-eight-year-old journalist. When I shift the subject to Van Damme's collaborations with Hong Kong directors John Woo, Tsui Hark and Ringo Lam, he expresses a brief dissatisfaction with HARD TARGET before focusing on Hark. I tell him that I think DOUBLE TEAM and KNOCK OFF are preposterously entertaining films, and he responds with a fond recollection of Hark's boundless energy. On set, Hark would sit in his director's chair with a cigar and glass of cognac, calmly running the show. When there was downtime, he'd shut down in his chair and take a nap; when roused, he'd be immediately ready to call action. Van Damme seems to have great affection for Hark, and I'm once again amazed that those two movies ever received a wide theatrical release. We need to get these two back together.

There was a depressing end to the Van Damme story in the making several years ago, but he miraculously turned cinema into a confessional and back into a playground. He's the best thing in THE EXPENDABLES 2, and has evolved into such a unique presence that I'd love to see what a world-class director could do with him. But he'll return this fall in UNIVERSAL SOLDIER: DAY OF RECKONING, and I've no quarrel with him sticking with what works. I'm just glad he's hungry again.