The Kidd Goes To Fantasia - THE TALL MAN

I can handle a bad movie. Whether it’s a poor choice of director that didn’t quite fit the material or a bad script or poor story choices or terrible acting performances, sometimes a movie just doesn’t work. I’m okay with that. I mean, I’m not comfortable with shit like that being made in the first place, but it’s not the end of the world. Bad art happens all the time. Usually when you come to the realization that a movie is bad, you simply strap in for the rest of the ride and hope that there’s something positive you can take away from this cinematic debacle to make you want to come back again another time to see something else. It’s like playing golf. You want that one shot, that one good hole, that sparkle of something good that stirs up inside you what made you decide to play in the first place. The same with movies… you want a little glimpse of that movie magic that made you fall in love with this form of entertainment to begin with. Bad movies are a dime a dozen lately, so we become desensitized to them after awhile. “Yeah, that one wasn’t very good,” and we forget that we ever saw it the moment we walk out of the theatre.

Movies that downright lie to me though, on the other hand… I CANNOT ABIDE!!!

I’m not talking about flicks that try to twist the way you’ve seen things up to a certain point or that unleash the “Ah-ha!” moment on you where you come to terms with the cleverness of their misdirection. I’m not badmouthing THE SIXTH SENSE or THE USUAL SUSPECTS. Those are movies that took such an angle and worked it to perfection. I’m going more with something like THE TALL MAN, which sets up a particular premise and then about halfway through the movie, decides to confess to you, “Oh, remember everything we showed you so far…? Yeah, fuck it. It didn’t really happen that way at all. Tough shit. Here’s how things are going to go now.”

THE TALL MAN takes you to the town of Cold Rock, Washington, a real shit hole stuck in the Pacific Northwest. The town died years ago when the mine shut down, and, on top of their ridiculously high unemployment rate, they have an abnormally high number of missing children over the years… way too many for anyone who has children to even consider staying anywhere near the town limits. But that doesn’t seem to bother anyone. Oh, sure… we can’t work for a living and some mysterious legend known as the Tall Man is kidnapping the kids, but that’s no cause for alarm or to get the fuck out of Dodge. It’s better to just hang around in the miraculous chance that either the mine re-opens or your kid is next to disappear. Makes sense to me. I mean, I would have packed up my shit and moved, but apparently I have no thing THE TALL MAN doesn’t – at least one ounce of common sense.

Right smack in the middle of Cold Rock is Julia Dunning, played by Jessica Biel, the town’s nurse who operates the local clinic after her doctor husband died whenever and however. He was supposedly the spirit of the town, and everyone loved him… and when he went, the town is thought to have gone with him. Julia is doing her best to contribute though. She helps deliver locals’ babies. She makes house calls. She pops in to the diner and pals around with her fellow residents. She’s average… only in the body of Jessica Biel. 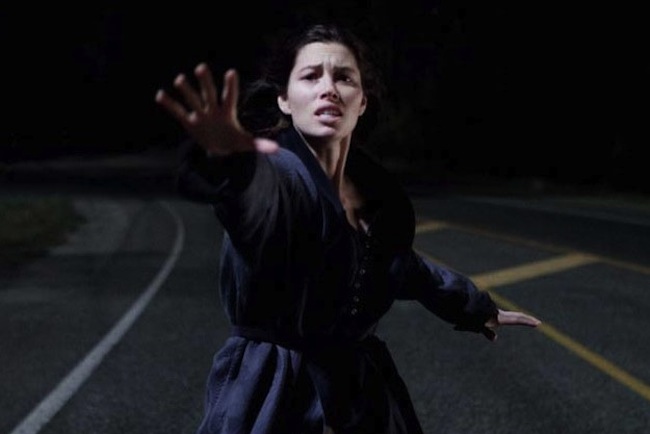 She has a son and a live-in nanny, and about 20 minutes into the movie, you know that the Tall Man is coming to take away her kid. You also know that THE TALL MAN is leading to Jessica Biel’s eventual confrontation with said mystery man, where identities will be revealed. When it finally happens, director Pascal Laugier throws everything but the kitchen sink at the screen, dragging Biel behind a rusty old box truck, having her attacked by a dog that’s conveniently brought along for kidnappings and finally flipping her in that very vehicle, while the shadowy figure and the kid, both who were also in the rollover, walk away unscathed.

Okay, let me get to the moment of complete and total bullshit, because, up to that point, THE TALL MAN isn’t all that bad. Sure, it seems to be moving in a predictable direction and the townspeople are dumb as hell, but at least there’s the attraction of unraveling who is the Tall Man to keep you involved. I mean, it could be anyone, most of which will be disappointing, because other than the nanny and some mute girl, none of the other secondary characters get enough screen time for it to matter much… but there’s at least something we don’t know that we’d like an answer to keeping us going.

That is until we learn that Julia is in fact the one behind these disappearances. Yes, Jessica Biel is the villain. And from then on, THE TALL MAN is completely fucked.

The woman who is seen around town all the time, interacting with everyone she meets, has a kid that isn’t hers, one that she took from another woman in town, and no one ever sees this. She plays with him in plain sight at her house, and yet is never caught doing so. When she is seen by the very woman whose child she took, that woman tries to take him back by force, because calling the police sounds like a terrible idea… and that’s where we have this whole action-truck sequence where Biel is going through a hell of a lot of trouble to try to recover a kid that isn’t hers, and what we think is the Tall Man is really his actual mom. Do you hear how stupid that sounds? Because it comes across so much worse on-screen when you realize the movie has played you for a fool for at least its first half and is proud of it. They haven’t flipped any script on you with any type of hidden clues that you should have picked up. They simply lie to you. What you thought you were watching was never true… so how dare you trust your own lying eyes that whole time? 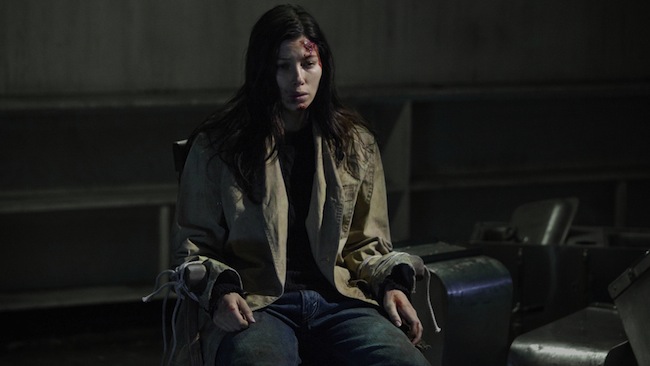 It doesn’t even matter what happens after that, because the Biel revelation is enough to kill your interest in the rest of the movie. And being at the midway point of the flick (yes, THE TALL MAN doesn’t even build all of this until the end to try turning it on you… they pull the trigger on this terrible plot shift halfway through), there’s no sense in walking out. You might as well see how this stupid movie ends up, so it can aggravate you even further… and believe me it will, as it turns into a message movie about the lengths we should go in order to raise children in good homes, even if it means stealing them from their poverty-stricken or alcohol-fueled upbringings.

Wow… did this movie piss me off a great deal by the time the credits starting rolling and even afterwards, as I loudly argued alongside others about the nonsensical design of the film over a few drinks… which probably only made my anger worse. But, even in revisiting my notes to write this review up, I’m still enraged by how flippantly THE TALL MAN tosses aside its own story in the hopes of being cool for having a twist. The problem is you have to lead up to that twist with events, conversations, actions that wind up supporting the twist. It has to feel fluid and natural. If you follow THE TALL MAN’s example, all you’re doing is telling the audience that what happened all the way up to the twist was nothing more than a set-up for some “Gotcha!”

I will give Jessica Biel credit where credit is due, because the one positive I came away from THE TALL MAN with was a desire to see her as a full-blown villainess. Once she’s in police custody, she does get a cold-blooded moment to shine and show some crazy evil that is wasted in this particular film. However, if given the leeway to ham it up as a baddie in something else, I think she can pull it off, no question. I guess that’s the one beautiful tee shot to the fairway that THE TALL MAN is going to gift me.

I wish THE TALL MAN were a bad movie, nothing more. It’d make it that much easier to walk away from it. However, it still triggers in me feelings of pissed-offedness due to its cheap tactics, and that’s something that will haunt me for quite awhile.