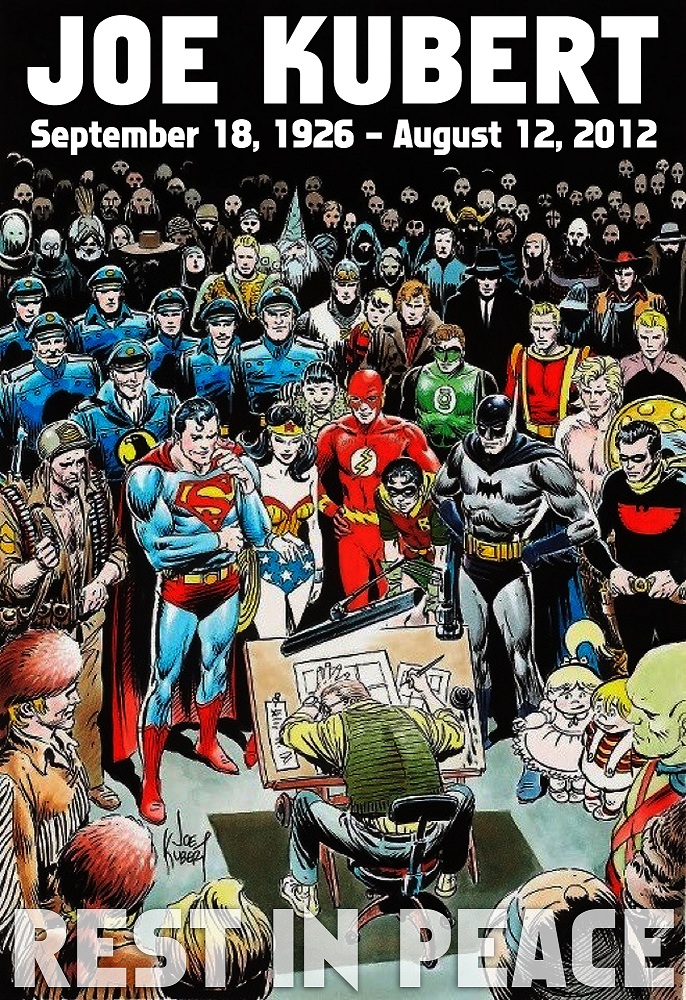 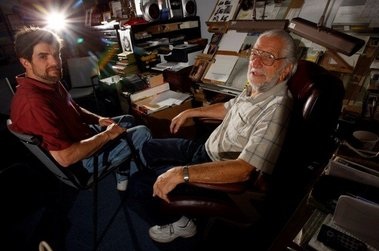 Comic book artist Joe Kubert, aged 85, passed away on August 12, 2012 from multiple myeloma (a cancer that starts in the plasma cells in bone marrow). His influence upon comic books and comic book artists is incalculable. This man, the immigrant son of Polish butcher, worked on his first comic book at age 12 when he was assigned a rush job to ink some pages for cartoonist Bob Montana (who 4 years later would introduce the world to Archie Andrews and the whole Riverdale gang).

At 16, and still in high school at Manhattan's High School of Music and Art, Kubert was working professionally on comics such as Blue Beetle and Will Eisner's The Spirit. He never stopped drawing; even working on the NITE OWL mini-series recently while in the hospital. The list of comic book characters he has laid down pencil, brush strokes, or color would be easier done by listing those characters he has not worked on. If I were to list the Top 5 characters most personally associated with Kubert, I would list them as SGT. ROCK, HAWKMAN, TARZAN, TOR, and RAGMAN. 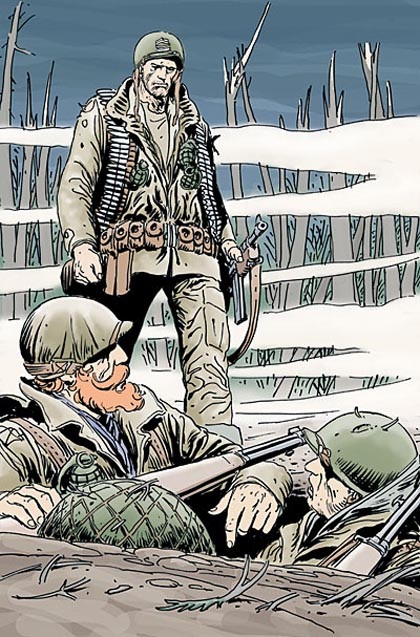 While many of the great artists of the comic book world have indeed influenced other artists, probably none moreso than Kubert in terms of practical and actual influence. Kirby, Ditko, Wood, and the like surely inspired many young kids to become cartoonists themselves but Kubert took that to a whole different level in the 1960s when he started an eponymous school of cartooning in Dover, New Jersey. While Kubert was inspiring readers through his comics, he was also training generations of cartoonists and illustrators and providing actual opportunities for them to make those all-important industry connections and learn the techniques that separate the amateurs from the professionals. The school has grown in size and influence and truly became widely respected within not just the comic book industry for the quality of its attendees and graduates. 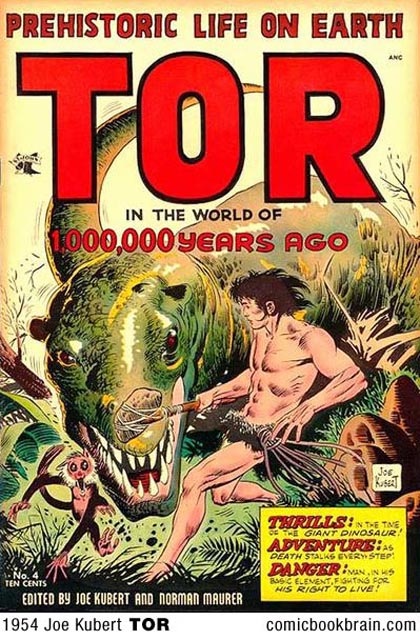 It is one of my greatest personal regrets that I was never able to work it out to to get there. I actually did pursue it back around 1990 or so. However, being married and working here in Texas, it just was not something I could work out financially to pull off. Kubert's work is unique. If you've ever seen a Joe Kubert comic book, you know it. He is an artist like Jack Kirby in that way. There is no mistaking a Kirby comic and there is no mistaking a Kubert comic. Kubert is a master at forming figures and scenes with his feathery brush strokes. No thick outlining. No perfectly straight lines. His work is always in motion -- a fluid motion. This is why his work on Tarzan is so seminal. Tarzan is a primal character and Kubert's art is primal. His war books (not just Sgt. Rock stories) were solid pieces, once again primal in their approach, and yet he could zero right in on just an expression or a look in a character's eye and flood the reader with an emotional reaction. The man always knew the best and most dramatic approach to telling a story through those 4, 6, or 8 panels per page. 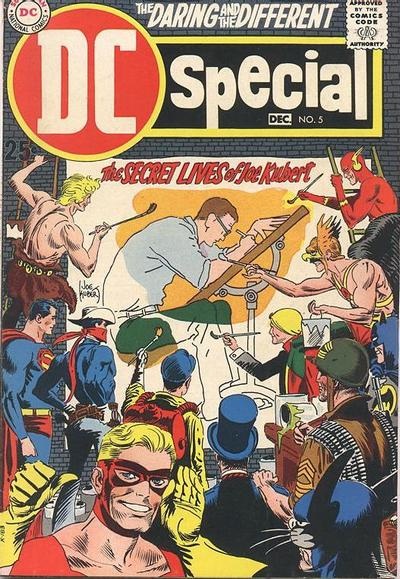 My first conscious exposure to Kubert's work (although I had seen it before but was too young to take note of it) was during the infamous DC Explosion of the 1970s in an odd comic called RAGMAN. I remember nothing of the writing. All I remember is the moody and creepy atmosphere of the art. I remember that wild and weird costume made up of rags and tatters. And I remember taking note of that name "Joe Kubert" and seeking him out from then on. For a long time, the only work I could get from him was either old reprints or the incredible cover art he provided for series such as ALL-STAR SQUADRON. There was a multi-issue crossover between the JUSTICE LEAGUE OF AMERICA and the ALL-STAR SQUADRON one time and the JLA covers were by George Perez and the ALL-STAR covers were by Joe Kubert. Making me choose which I "like" better would be a Sophie's Choice even though there are probably not two drawing styles more dissimilar than Perez and Kubert.

I never had the pleasure of meeting Kubert. I always wanted to. I don't think I've ever seen a picture of him not smiling. By all accounts, I have never heard a "bad" Joe Kubert story. Kubert's legacy appears to me to be a life well-lived, a career well-earned, children well-raised, and an influence that will perpetuate both through the lives of his children and their children and their children's children but also through each and every cartoonist and illustrator who has ever been touched by his life and his work. 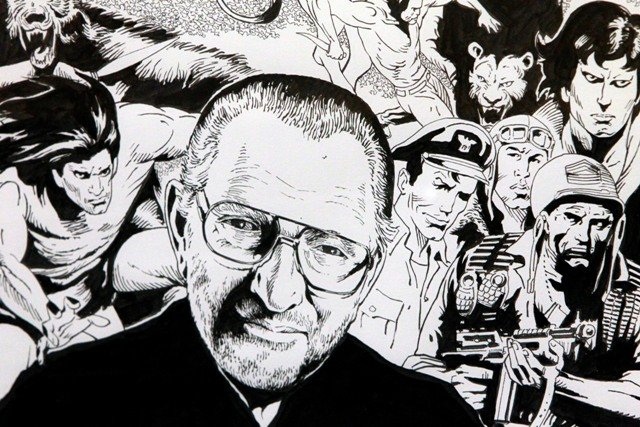 Kubert was married for 57 years and his wife, Muriel, died in 2008. He is survived by his five children, sons Adam, Andy, David, Danny, and daughter Lisa; 12 grandchildren; and one great-grandchild. Most comic fans are aware of Adam and Andy Kubert who are successful and popular comic book artists in their own right.

While I and many others are sad to have lost this man and any future work he might have still had in him, this is a moment to celebrate what he gave to me and to the world and what is still to come that is inspired by him.

Peace and rest in the bosom of Abraham.

Prof. Challenger is Texas artist and writer, Keith Howell. You can read his stuff here and over at profchallenger.com. You can also get in on the ground floor of his new endeavor, "Everything I Ever Needed to Know I Learned from Comic Books" here.