Some Cool Shots From The Astounding & Upcoming STAR TREK: THE NEXT GENERATION Season One Blu-ray!!

Here's a few images from the forthcoming STAR TREK: THE NEXT GENERATION Season One Blu-ray, featuring an astonishingly ambitious restoration of the series - a process which, essentially, created the capacity to present the show in true High Definition by reconstructing its entirety from the ground up (details HERE).

This was a phenomenally daunting and challenging process - which extras on the set detail in some length (imagine a warehouse evoking the building at the end of RAIDERS OF THE LOST ARK and the beginning of that other Indy movie...well, not that big...but it's still big....) - filled with box after box after box after box after box after box of TREK footage which needed to be identified, cataloged, etc.  After which eps were essentially assessed, cleaned up, and re-built, etc.

I'm hugely understating the magnitude of this undertaking - when you check out the Blu-ray set (which streets July 24), I highly recommend the extra series called STARDATE REVISITED, directed by Roger Lay, Jr. and Produced/Edited by Robert Meyer Burnett.  This series of extras will, evidently, run across issuances of future seasons - the docs are extremely insightful and, most awesomely, surprisingly honest.  Much like BBC's DOCTOR WHO DVD sets, STARDATE REVISITED does a very nice job being clear-headed about both the strengths and weaknesses of TNG...as well as giving one a very good sense of exactly how and why certain decisions were made during the show's development and production.

These STAR TREK: THE NEXT GENERATION Blu-rays are hugely critical for a number of reasons, but three factors shine above all now that I've looked upon these discs  for some time.

1)  You have never seen ST: TNG like this before.  With its astonishing clarity, and the new revelation of detail which was evidently present all along but LITERALLY indiscernible amidst the dodgy resolution of previous presentations, TNG (on Blu) feels radically different than it did before.  In many regards, it feels like a contemporary show produced in a sometimes retro way.  This means we will, for the first time, be able to experience TNG with all the breadth that was intended - as opposed to viewing versions of it which were hamstrung due to previous presentational (is that a word?) technologies.  The difference between 'then' and 'now' is arresting.

2)  These Blu-rays offer HD presentations of episodes which did not exist as HD to begin with, and were challenging to present as such.  Their presentation in this format  is the product of tremendous ingenuity, inventiveness,  and patience.  HOW this was accomplished could, in theory, be applied to other titles.  MEANING:  future STAR TREK series might well enjoy the same treatment should the TNG Blus prove successful.  DEEP SPACE NINE on Blu?  Yes...please.

3) The dazzling results seen on the TREK: TNG Season One Blu-ray set suggest that any number of other series could be approached in the same manner, presuming the necessary raw material exists to begin with.  Could STAR TREK: THE NEXT GENERATION's Blu-ray undertaking and success pave the way for other TV shows - whether they be legendary or forgotten - to be seen anew in breathtaking HD?  Seems like this could well be the case.  These TREK: TNG Blu-ray sets may not only be important to STAR TREK, but it's easy to imagine this effort eventually being regarded as critical to the preservation of television history in general.

Just my humble two cents for the moment - I'll be posting more thoughts as I wrap-up my journey through TNG S1 over the next week or so.  For now, here are three images from restored episodes...representing 11001001, The Arsenal of Freedom, and Where No One Has Gone Before respectively.  Quite frankly, I'm a tad hesitant to post these pics because I've yet to see a single promo shot from this boxed set which comes close to  conveying the visual impact of the actual Blu-ray image.  So, think of these as a tease and a taste of what you'll find on the set when it releases in a few weeks...but know that the real thing is truly something special to look upon. 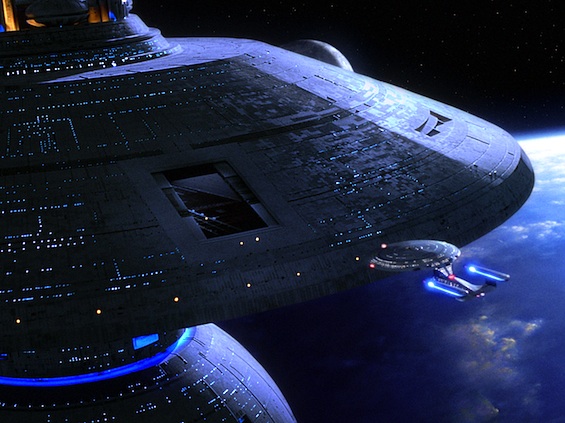 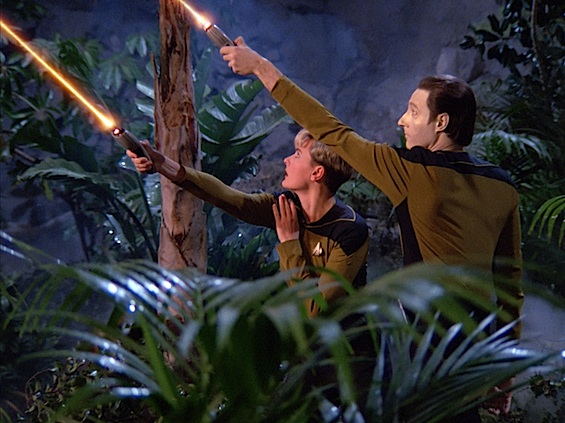 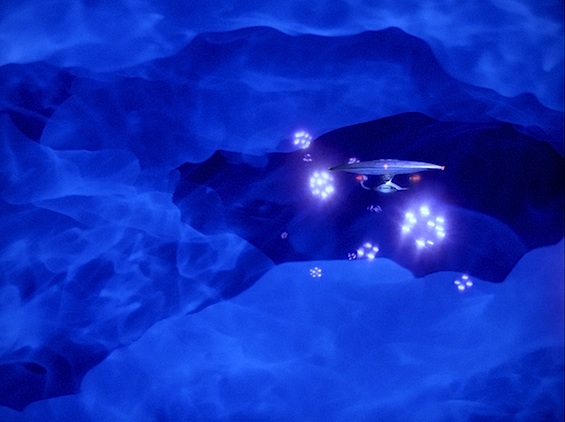