Wreck-It Ralph shows 10 minutes at Comic-Con and wins the audience by being the Who Framed Roger Rabbit for video game geeks!

Ahoy, squirts! Quint here. I’ve got one more bit of panel coverage from this Thursday’s run of geekery at Comic-Con 2012 before I collapse. Even then I’m guessing I’m only going to be getting about 4 hours of sleep tonight… because I have to wake up early and interview Wreck-It Ralph director Rich Moore.

Wreck-It Ralph has gained a lot of heat over the last few months after strong responses from presentations at E3 and CinemaCon, but I want to say for the record I’ve been buzzing about this one since D23 last year. It was a surprise there, stealing a lot of the spotlight from bigger titles like The Muppets and John Carter (it was still overshadowed by The Avengers, but of course it was… it’s the first time we heard “I have an army!” and “We have a Hulk.” You know how it is.).

Here’s the E3 trailer if you missed it. Pay attention because some of this stuff comes into play in the footage presentation I’m about to describe for you fine people.

Okay, so the John C. Reilly voiceover narration? That’s leading into him that “Bad Anonymous” group you see in the above trailer with a crazy collection of video game bad guys. This movie is like Who Framed Roger Rabbit? for video game nerds. New character amongst a bevy of famous video game characters.

One of my favorite parts of this 10 minutes of footage shows them all leaving Bad Guy Anonymous, which is being hosted by one of the ghosts from Pac-Man, so… guess where they were for that scene? That’s right, the center of a Pac-Man game, where the ghosts come out. All the guys spill out in Pac-Man graphics with Ralph lagging behind. When nobody is looking he sneaks down and grabs the cherry, picking up 100 points and carrying some delicious fruit out with him.

It’s back to CG toon graphics as he goes to the video game hub, which is kind of like a huge train station that leads to other games. All types, really… racing games, FPSs, you name it. The cherry he picked up in Pac-Man are huge in his hands as a hologram stops him… but let me stop there and interject something.

The very first time we go into the arcade game, pushing past the 8-bit, is kind of fascinating. When it’s quittin’ time, the camera slowly pushes into the glass of the stand-up arcade game (called Fix-It Felix, Wreck-It Ralph’s arch enemy) and it’s not just the graphics that change, the score also morphs from MIDI to orchestral. That’s a lovely little touch.

Anyway, so Ralph is stopped by a hologram at the game hub (think of it as Toontown for video games… tons of crisscrossing video game characters visiting each other as the arcade/consoles sleep… and a video of Sonic even runs explaining to us that if a video game character is killed out of his or her game you won’t regenerate… so, Inception/Nightmare on Elm Street rules. If you die in another game, you die for real.). The hologram dude (who calls himself a “Surge Protector”) is some kind of security that does a random search asking where Ralph is coming from (“Pac-Man”) and if he brought any fruit with him (“No!” he says as he hides the giant two cherries behind his back).

On the way back to Fix-It Felix he spots a character begging for some food, a very depressed looking Qbert, snout limp, eyes sad. Ralph considers for a second before giving over the second of the cherries to Qbert. “Here you go, buddy. It’s fresh. It was just picked from Pac-Man’s.” See, Ralph has a good heart!

The movie is about a bad guy who wants to be a good guy and it seems like he does risk his life (remember if dies outside of his own game he doesn’t come back) in the more modern and violent games.

We get a glimpse of one of these games, a Call of Duty/Halo/FPS type called Hero’s Duty. This commando squad, led by a blonde girl (voiced by Jane Lynch) hears something: the familiar jumping sound from Mario, and investigate. Out hops Fix-It Felix (voiced by 30 Rock’s Jack McBrayer). They unload on him and he barely escapes. Ends up at gunpoint and becomes starstruck by the blone’s “high definition.” He’s in awe of her, actually.

We also see a candy car racing game as Ralph protects a little dark haired girl being picked on by her peers as being “just a glitch.” Sarah Silverman voices this little girl, named Vanellope von Schweetz, and it seems like an unlikely friendship forms here… despite the fact that has apparently stolen a trophy Ralph won in Hero’s Duty and just how annoyingly she thinks “Hero’s Duty” sounds like “Hero’s Doody.”

Wreck-It Ralph feels the most like a Pixar film than any regular Disney film has. There’s lots of heart on display, thanks greatly to John C. Reilly’s voicework, and a whole lot of commitment to a ridiculous, geeky conceit. 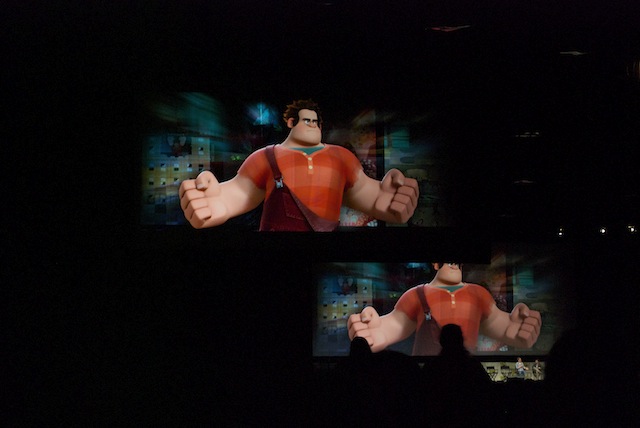 The Q&A was pretty fun, too. John C. Reilly was there alongside director Moore and a Daisy Dukes wearing Sarah Silverman (sorry guys, but I was stuck at the very far back of the Hall and my trusty photographer isn’t on hand this year) and the first question was about any video game characters they couldn’t get the rights to.

Moore responded vaguely about a certain mustachioed plumber and his brother who wanted even MORE money. So, yeah. No Mario in the film, but as you can see in the trailer Bowser made the cut.

Someone asked John C. Reilly what he prefers, being a voice actor or a “real” actor. Lots of laughs from the audience on that as the questioner started backpedaling immediately. Reilly’s response: “I prefer being an employed actor.”

Reilly was really on point, actually. He ribbed some of the fans, but did it in such a lighthearted way it didn’t come across as mean. Is it hard battling different personalities? “No, I’m a Jedi so it’s easy.”

My favorite was the question asking about the process of clearing the rights on these video game characters. The serious answer from Moore was that it was a gradual process, but one by one they got the game companies on board. Then Reilly jumps in saying imagine you’re the Frogger guy… It was popular, everybody played it 30 years ago, but not so much anymore. You get a phone call from Disney wanting to put your creation in multi-million dollar movie… “What’s the Frogger guy gonna do? Say no?” Again, it was so innocently said that the dickish side of it wasn’t stinging. I love The Reilly.

Wreck-It Ralph looks good. Disney had a strong line-up at the Con this year, I must say.

Got a full day of panels tomorrow, so stay tuned!