Ahoy, squirts! Quint here. I almost deleted the invite to the IMAX party when I got it. Not because I don’t like the IMAX folks or hate it as a format, but because my Comic-Con is always so full that I have little time for parties, even the fancy ones.

Thankfully I looked a little more closely at the invite, past the excited announcement of a mash-up of IMAX scenes scored by famous DJ Glenn Morrison, and saw at the very bottom, almost hidden, the mention that “Oh, yeah… we’ll also show you something from Skyfall.”

After the spit take and the Tex Avery eyes I hurriedly RSVP’d and that’s how I ended up taking a bus to the Reuben H. Fleet Science Center tonight and watched the brand spankin’ new exclusive to IMAX trailer for the new James Bond film Skyfall.

Before we get to that, I must comment on how fucking crazy it is to watch IMAX material on a planetarium dome. You essentially lay back and stare straight up. Now, the curvature of the domed screen made straight lines really wonky, but I think the future of IMAX might be some middle ground between the straight ahead giant screen and the leaning back, looking up with nothing obstructing your field of vision fuck-you big screen.

The IMAX Remix, as they called the event, was actually pretty far out. They mixed up IMAX scenes from their documentaries (ocean, space, American landscapes, etc) with movie sequences, like the tower scene from M:I4, the forest fight from Transformers 2, some bits from Trek and Harry Potter and the Order of the Phoenix. Being a total music illiterate I couldn’t tell you the jams he was pumping (that’s what the kids say these days, right?), but it was a lot of fun.

After his set we were introduced to the Bond trailer and let me say this… they’ve finally realized they need to sell this as a James Bond movie. I mean, I liked what I’ve seen before. Sam Mendes’ character work was never in question, it was the crazy-ass James Bond stunts and action that was the mystery.

This trailer is almost defensive in its “Oh, you want some action? I’ll give you some action! You’re going to have more action than you know what to do with!” It’s barely even a slow build. We see Bond moving through a dark hallway, gun up and at the ready… he finds what looks like a dead body and an empty container, which voiceover tells is a harddrive with the identity of every single government agent undercover in terrorist groups. It’s bad for M and I guess Bond has to go put the hurt on some fools because from here on out it was just fight after fight, shooting after shooting and stunt after stunt.

The highlight of the stunts was Bond catching a train… BY FLINGING HIS BODY ONTO THE ROOF! He’s driving a motorcycle and sees an opportunity to rev up and launch himself off a bridge onto the top of a moving train. Typical action heroes would, you know, keep their motorcycle… but not Mr. Bond! Ol’ show off Jimmy here hits the cement barrier, which launches his body at enough force to land somewhat in time with the movement of the train. It’s not a graceful landing, but (spoiler) he makes it.

There were a few more Bond trailer moments (he gets his “Bond, James Bond” line of course), but other than the crazy action (did I mention a shot where he calmly jumps down into one of the train compartments just as everything behind him is torn away violently? No? That happens, too) there’s a great back and forth between Daniel Craig and Ben Whishaw, the new Q.

Whishaw and Bond are sitting next to each other. Whishaw is young, nerdy and Bond doesn’t seem to think much of him.

”I’m your new quartermaster.” “You must be joking.” “I’ll hazard I can do more damage on my laptop, sitting in my pajamas, than you can do in a year in the field.” “So, why do you need me?” “Every now and then a trigger has to be pulled.” “Or not pulled. It’s hard to know which… in your pajamas… Q.”

They are obviously setting up this new Q in more of a Simon Pegg/Mission: Impossible way, but it seems to work. That above back and forth between Bond and Q had just the right amount of braggery and playfulness.

Been a big fan of Whishaw’s for a while. I first registered him in Layer Cake and then I absolutely loved him in what I believe is one of the most underrated, underseen films of the aughts: Perfume: The Story of a Murderer. 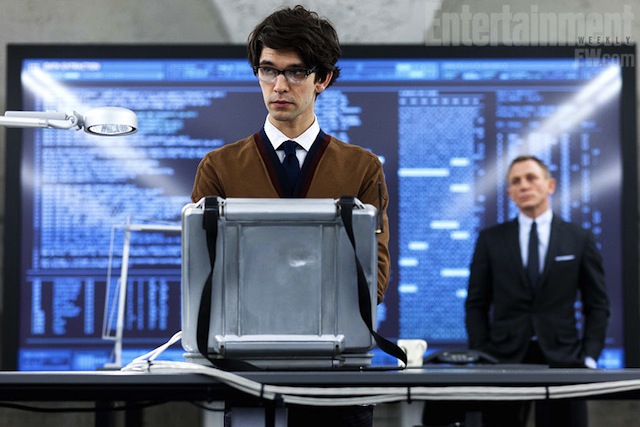 Other bits that jump to mind are the heavy Asian influence, Bond against neon dragon signs, etc, and this exchange between M and somebody else:

All in all it did what a trailer is supposed to do, especially a James Bond trailer. It might as well have been done by the Bond Trailer rulebook because damn if it didn’t sell the epic adventure, the cool spy angle, the giant set pieces and the charming banter that all combine to make James Bond… well, James Bond.

Word is this trailer is hitting IMAX screens in “a couple of weeks” which would lead me to believe it’ll be attached to The Dark Knight Rises.

Alright, back to the grindstone. Big day tomorrow and a couple more panels to catch up with before I sleep.