Quint sees DREDD at Comic-Con and finds it to be a fun and violent piece of exploitation cinema!

Ahoy, squirts! Quint here. I was lucky enough to cap off Preview Night of Comic-Con 2012 with a screening of the upcoming Dredd, adapted from the very popular 2000 AD character. 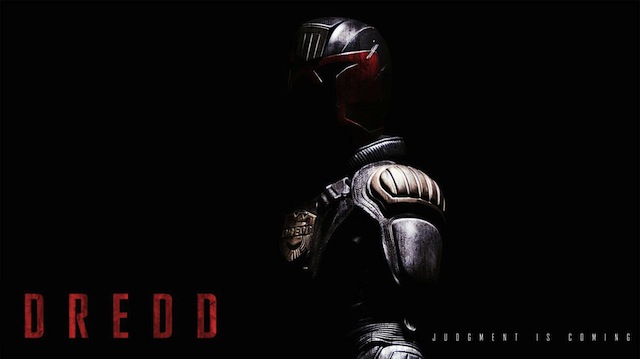 Now this is how you handle a reboot. Stallone’s Judge Dredd sucked and I’m not just speaking from vague memories (I recently stumbled upon it on TV and looked on in horror) or from the crybaby uber-fan perfectionist angle (I’ve never read one 2000 AD cover to cover, much to my geek shame). The filmmakers and studio looked at a crap film with great potential and started from scratch, deciding to get right what Stallone’s film got wrong.

Again, not speaking as a die hard fan of the character, I can say that this Dredd, as played by Karl Urban, is a far stronger character. He has a simple job and he does it with little emotion. There’s not an over-complicated frame-up plot device here. It’s a very, very, very, very simple story. Tough cop and his unlikely new partner get trapped in Mega tower and have to fight their way to freedom.

In that respect, yes… the similarities to the incredible action film The Raid did cross my mind. I have to imagine when director Pete Travis sat down to watch The Raid he just kept muttering “Oh, fuck me… fuck me… Goddamnit!” over and over again, but I know this film was well into production when The Raid began screening, so I’m sure it was just one of those nasty movie-world coincidences.

It’s a shame, but the action is so different that it’s quick to shake The Raid off. For better or worse, Dredd’s such a wildly different character than Iko Iwais’ Rama that it changes the whole tone of the set up. Rama didn’t make it through any fight without taking a hit. Dredd is much more of a superhero in that regard. There’s only two points in the movie where he’s on the outs, really.

Olivia Thirlby’s Anderson is the more vulnerable one. The drama really revolves around her. She’s a newbie, a cadet in training that isn’t all that spectacular in any combat or strategic regard, but she’s given a chance because of her special gift. In this post apocalyptic wasteland there are many deaths due to radiation… and some surprising aftereffects. Most mutations show themselves physically, but Anderson’s mutation is that she has a little psychic touch.

It sounds super cheesy, but they use it very well. Think of her like a fledgling Professor X. She struggles with their prisoner (played by Wood Harris), but not in a physical way. It’s a mind game and she’s far his superior. They do some pretty clever stuff with it, actually. They handle that aspect of the movie with surprising smarts if I’m going to be a bit doting.

That’s not to say Thirlby plays this character as weak. There comes a point early on in the film where she has to pass judgment and she does so. 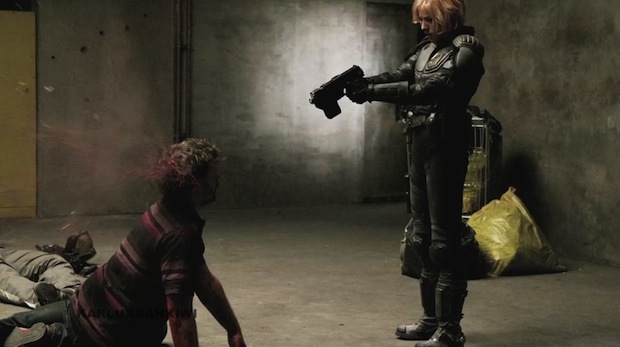 Three things to follow up that picture. One, yes, the bullet trajectory is wrong, but it doesn’t play that way in the film. Two, she’s not wearing a Judge helmet and we never see her in one for a very specific reason: it interferes with her abilities. This fact does not go by without a smart-ass comment from Dredd, by the way. Three, look at that brain matter!

That’s just the tip of the iceberg. You can say many things about this movie, but tame is not a word you’ll see associated with it. In terms of gore, they swing for the fences. With some very creative use of super slow motion (thanks to a plot device involving an inhaled drug that slows perception down to a crawl) we get some choice violence, the kind of graphic violence ratings boards really, really hate. If you’ve ever wanted to see what a bullet going through a dude’s jaw looked like in slow motion, then by God Dredd’s the movie for you!

Karl Urban lets his ego go here and embraces what many actors would fear to be a one-note character. On the surface Dredd’s not much more than an eye-less scowl. 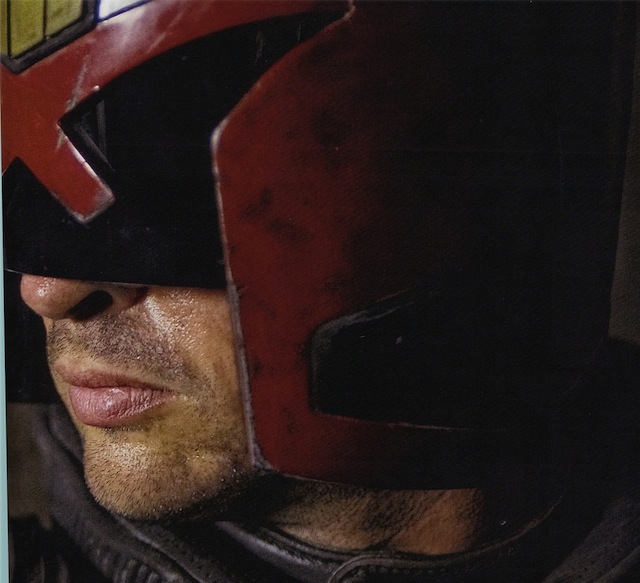 Stallone couldn’t stay in the mask for even a quarter of his movie, but Urban does not take it off once. Not once. Which means his performance relies on line delivery and body language.

It’s a helluva thing for an actor to take his eyes out of a performance and Urban has to be applauded for his bravery in doing that. It not only works, it makes his character so much more interesting than if he lost the helmet halfway through or some other convenient bullshit. This Dredd really is an unmovable embodiment of the law with a slight touch of humanity underneath it all.

From a filmmaking standpoint this film also gets high marks. It doesn’t shy away from the exploitation elements at all, but it also treats them with respect. It might revel a bit in the violence, but it’s all for an overall tone and feel that is somewhere on the right side of the Punisher: War Zone-esque guilty pleasure line. It’s a pleasure-pleasure movie, not a guilty-pleasure movie. There are some really thoughout character beats here, so it’s not a hollow exercise in violence.

They don’t forget the dark comedy elements, the action is well done, the guns are badass (who doesn’t want to a weapon that can switch over to an explosive round with a simple voice command?) and minus a couple of jarring dark digital photography moments the whole thing is crisp and easy to follow.

My only complaint is I don’t think they did as good of a job setting up the geography of the building as they could have. That’s one thing The Raid did really well. I always had an understanding of where the good guys were and where the bad guys were. Here it seemed more random and conveniently empty at times. But that’s a tiny nitpick and one that didn’t really bother me while watching, just something I thought about as I was writing this review.

As with most films if they get the characters right that’s the battle won. I really liked Thirlby and Urban in this film and I wanted to watch them on this little adventure. I even liked Lena Headey’s Ma-Ma, the boss lady villainess. It’s hard for me to see her and not think of her as Cersei Lannister now, but she seemed to be having a bunch of fun in the movie and was a believable hardass. 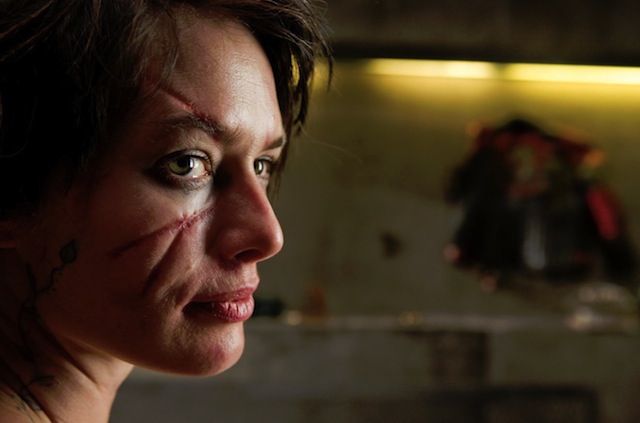 Anyway, the flick’s strong, with a hell of a great sound design and some crazy Verhoeven-level violence/satire moments that made me smile. From the reaction of the hardcore Judge Dredd fans in the crowd, I’d say the fans will be happy with this movie, too. Speaking as an ignoramus (what else is new?), I think fans of exploitation flicks will enjoy it as well. Anybody who enjoys letting go and having a good time at the movies will get a huge kick out of this film.

Now, I sleep. Big couple of days ahead of me!

Be sure to click the Twitter link below and follow me as I hit Comic-Con hard and heavy. I’ll be tweeting reactions of footage presentations and Q&A tidbits from all the big panels over the next few days including The Walking Dead, Game of Thrones, Marvel’s Iron Man 3, Raimi’s Oz, The Great and Powerful, Django Unchained, Elysium, The Hobbit, Man of Steel, Looper and more.