MY SUCKY TEEN ROMANCE is coming to Blu-Ray & a theater near you?

Hey folks, Harry here...   This September 4th, 2012...  MY SUCKY TEEN ROMANCE is coming to Blu-Ray on the Dark Sky Films label!   This is awesome news for anyone that has been following the rather amazing development of Emily Hagins' burgeoning film career.   This is her third feature film.   The last of her High School years - I can't believe how far Emily has come, so quickly.  When I watched it for the first time at the Paramount Theatre here in Austin during SXSW...  I was stunned that the film was as professional and just flat out REAL feeling.   The VFX work, the performances, the pacing of the film, the humor...  It was working.   The characters were developed and portrayed by young actors with a future ahead of them.  This is a film that genre lovers should really get behind, because it is working far better than some studio flicks with 10s of millions of dollars.   And it was made on a shoe-string!   Emily is now working upon her 4th feature - but when Dark Sky picked up the title, they contacted me to see if I would be interested in helping them get MY SUCKY TEEN ROMANCE in some theaters for Big Screen Screenings - and I agreed.   I'm proud of this little film, and I really do think my improv'd cameo is one of my better on screen roles.   And Yoko was even the Music Supervisor on the flick.   So yeah.   Lots of love.   Seeing this artwork with a Blu-Ray label on the top of it is one of the most surreal awesome things I've seen in a long time.    As we get closer to that date, we'll be sharing the screening opportunities.   If you'd like to see this wonderful youthful Vampire Horror-Comedy-Romance...  be sure to let us know, and we'll be sure to help make it possible!   Here's the BluRay cover: 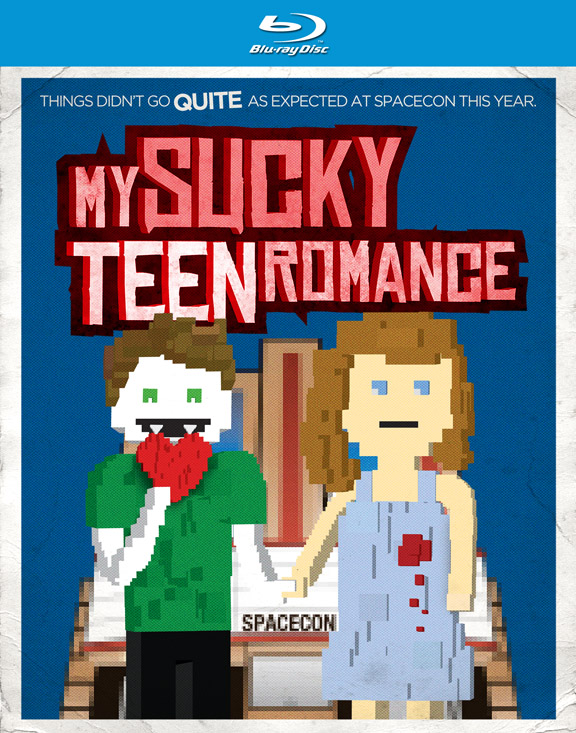