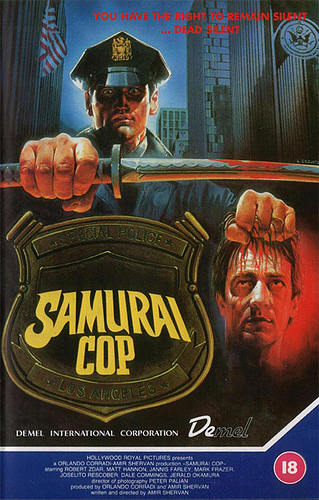 Having handled my column of cinematic atrocities over the past few years, I’ve come across some truly peculiar films. From flicks like THE GINGERDEAD MAN to THANKSKILLING, there has been no shortage of shit-nema out there, but I think I may have finally run into the holy grail of horrible. Ladies and gentlemen, I present to you, SAMURAI COPS.

In his first – and apparently only – role ever, Matt Hannon stars as the Japanese-trained officer of the law, Joe “Samurai” Marshall. While looking completely like a pot smoking California surfer guy, the movie attempts to sell you on his martial arts bravado and his smooth talking ladies man demeanor, something that never truly comes to pass. Buddying up with the wisecracking, African-American, comic relief racial stereotype embracing Frank Washington (Mark Frazer), the two set out to take down a steadily emerging Los Angeles based Japanese crime syndicate, the Kitana. Led by Mr. Fujiyama (Joselito Recober) and his right hand man, an evil Japanese samurai named Yamashita, strangely played by American/Lithuanian Robert “The Face” Z’Dar of MANIAC COP fame, their organization is trying to become the big dogs on the west coast, a feat of high proportions considering that their army consists of a small ensemble of misfit henchmen whose characterizations in the film are severely underdeveloped, as they seemingly serve no purpose other than to fall victim to our dynamic duo. 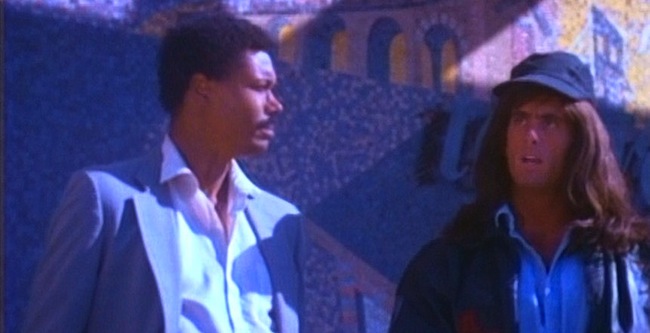 Now where the film heads south is… everywhere. One of the first things that comes to mind is the horrible script that basically has these amateur non-actors reading the most horrendous lines of dialogue known to the world, including stuff like…

I will bring you his head and place it on your piano!

The chief’s gonna burn my ass.

Trust me, this isn’t the worst of it, as a great deal requires more context, but just think of an entire film filled with nonsensical quips and one-liners, and you’ll have somewhat of an idea as to what’s going down.

Furthermore, as if the dialogue itself wasn’t so ineloquently written, the audio itself is severely flawed. I’m thoroughly convinced that the film was shot completely silent and that every sound you hear consists of horrendously bad post dubbed voice recordings and even worse foley work. When watching the film, you get the feeling that this was a foreign language martial arts movie that had been dubbed into English, only you can visibly see that there was never any other language involved. While it might be disconcerting at times, it ultimately adds to the laughs when those few scenes come around where everything is severely out of sync and the visible mouth movements trail the audible words by several seconds. 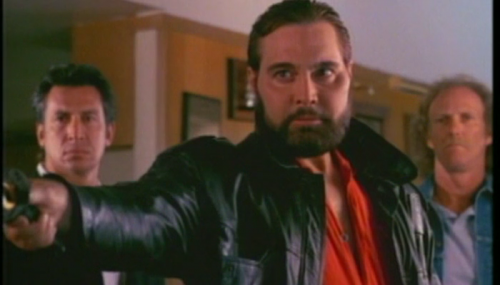 Now, I know many of you are always wondering, “What about the nudity? Where’s the T&A?” What I can tell you is that, while it isn’t your typical fare of DD’s bouncing all over the screen at every opportune moment, the movie does have its fair share beautiful women who don their birthday suits with class and style. Along with the aforementioned Krista Lane of DEEP THROAT II fame, they’ve brought along scream queen, Melissa Moore as a scandalous officer of the law, and  “all-American girl,” Jannis Farley as the woman who steals our playboy Samurai’s heart. With this trio of women, each being sexy in their own right, know that you’re going to get a nice treat for your eyes as you enjoy this train wreck of crap cinema.

Despite everything I’ve already said, I could still segue into how there is an abhorrent absence of establishing shots, where the majority of the scenes starts right in the middle of the action with nothing to give you a sense of where you are or what is about to transpire. I could bring up how all the action sequences seem to have been shot with the actors/vehicles moving in slow motion, only to be sped up in post to truly bring them “to life,” a phenomena that lead to the actions in the forefront appearing to be at a normal speed, but all action in the background happening at hyper pace. Hell, I could even talk about how the movie has some of the worst editing I’d ever seen, with the total disregard of the rules of cutting film leading to an incessant amount of jump cuts and a scarcity of match cuts. I could go on and on and on about this that and the third, but what it all means is that from all standards of filmmaking, the movie sucks…

And you’ll love every second of it. 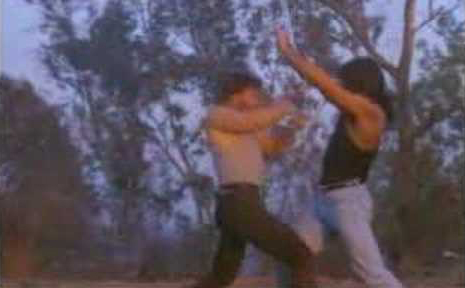 Culminating in one of the most “magnificent” final fight scenes (strangely enough the only one that has any semblance of a samurai battle in the entire movie), SAMURAI COP was definitely trying to capture the feel of LETHAL WEAPON while adding a bit of that martial arts element that was popular in the 80s, but tremendously fell short in almost every determinate cinematic category. Sadly - or rather, luckily - nobody involved in the film seemed to have any idea what they were doing and somehow their inabilities allowed for this all the amazingness that this film exudes. Short of a few exceptions, the stars of this flick were pretty much done for as far as their acting careers were concerned. I think I heard that our star, Matt Hannon became a bodyguard for action-star Sly Stallone, and a couple went on to do a few more super low budget b-movies. From their performances in SAMURAI COP, it isn’t hard to understand why.

Yet and still, I suggest you do yourself a favor and subpoena SAMURAI COP from your local DVD retailer/rental house. Go in knowing that it might be amongst the worst films ever released to market, but therein lies every reason why its so god damn fun to watch. Enjoy.