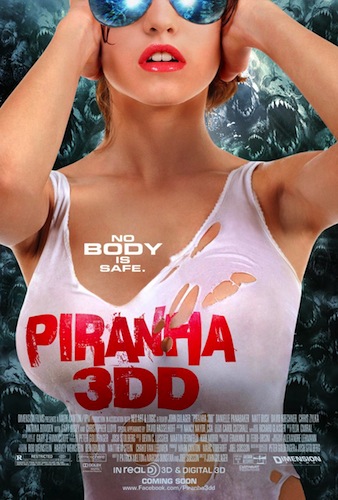 Two years ago, audiences nationwide were given PIRANHA 3D, a post-converted 3D remake/parody of the low-budget Roger Corman production of 1978. It was successful in delivering some good-humored, guilty pleasure fun and instantly became a cult classic. It was only a matter of time before they raised the ante and followed it up with another film to build on the moderate success of the original.

In PIRANHA 3DD, we’re given more of what fans of the original want. Hell, less than thirty seconds into the flick, they’re already recapping the highlights of the original film with beautiful college co-eds prancing around on boats in their bikinis and wet tees. Its almost like they pick up right where they left off, bringing the tits and terror to new heights at a new location that’s sure to be a hit with fans of the first film.

Welcome to The Big Wet, an adult themed water park that founder Chet (David Koechner) bills as the sexiest aquatic adventure land on the planet. This new moniker, however, comes at the dismay of co-owner – and Chet’s niece – Maddy (Danielle Panabaker) who has returned home from school for the summer and is shocked by the park’s fresh direction. Coincidentally a marine biology student, she is amongst the first to discover the local presence of the prehistoric piranhas that wrecked havoc just a year earlier at Lake Victoria and pleads to have the park shut down in the wee hours before the grand opening. Unfortunately for the park’s day one patrons, her cries go unanswered and as you can imagine, all hell breaks loose when these ferocious fish find their way into the water filled with thousands of people who have paid their fares for a day of bouncing boobs and sunbathing. 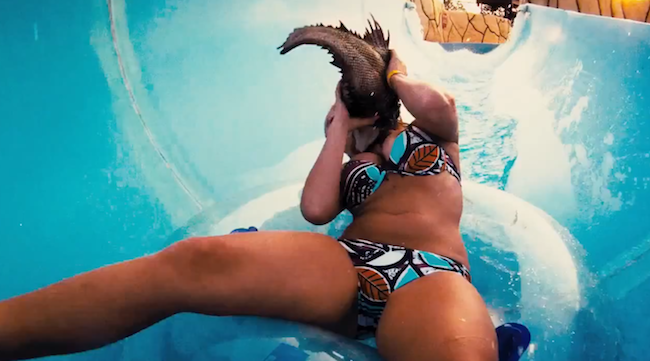 While still a sequel to last year’s film, 3DD is somewhat more of a remake of the 1978 classic than its predecessor, touching on the fish’s presence resulting from the drainage of infested confines and the attacks being focused on a commercial aquatic attraction. Maintaining the storyline from the 2011 film, however, the opening acts of the film set up how the mayhem that is about to ensue arises, mostly from the shady and greedy business practices of the park’s foreman, Chet. Detailed in a fashion that will appeal to both newcomers and veterans of the franchise, you are quickly brought to speed as to what these things are, where they came from and what they are about to do to an unsuspecting batch of innocent, fun-seeking human beings.

Scattered amongst this gradual buildup are a few isolated attack instances that stand to remind you that this is still a PIRANHA flick. My personal favorite involves an assault by a human embedded piranha that attacks her sexual partner during coitus. It’s this situation that brings about one of the film’s funniest lines and the necessary severed penis shot that is now an official staple of the franchise.

It isn’t until the final act where shit hits the fan that the film truly becomes a B-masterpiece. When the fish finally invade the waterpark and run wild with the park’s clientele as chow, the pandemonium truly ensues as Maddy, who has been trying to warn everyone of this ensuing terror from the get go, must come to the rescue and save the day. While not quite as chaotic as the first go round, given the extremely enclosed setting, there are brief moments in the madness that validate it and make it as worthwhile as the initial flick. 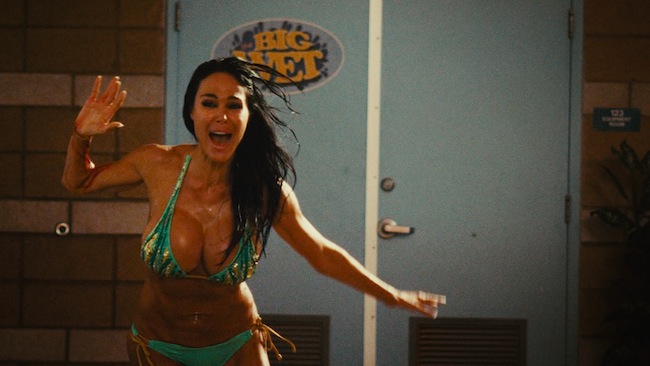 The one element of the film that truly stood out for me above the rest, were the celebrity cameos. Newcomers Gary Busey and David Hasselhoff join series veterans Christopher Lloyd and Ving Rhames in making for welcomed familiar faces to the film’s cast. Watching these actors that we’ve all come to love in one facet or another, interact with the rest of the B-movie cast in this obviously low budget crap fest of a film adds a layer of credibility humor to the production. There’s nothing in the film funnier than watching Ving Rhames’ Deputy Fallon face his fears brought on by the events from the last film or watching Hasselhoff make a complete fool of himself via a surprise I won’t ruin for you. Just know that its extremely good stuff.

At the end of the day, the only ones watching PIRANHA 3DD should already know exactly what they’re getting themselves into. This film’s audience ought to be prepared to embrace how horrendous the film intentionally is and relish in it being a canvas for scantly clad debutantes and flesh eating fish humor. For what it sets out to do, it definitely works and in many ways does so better than 3D. I definitely wouldn’t approach this film expecting some type of cinematic treasure, but if you found yourself appreciative of the last foray into this world, expect more and better of the same. If you fall into this category, be sure to catch it in the theatres in 3D –if you can find one carrying it - or at least bite the bait on VOD. Trust me, you’ll definitely love the swim. 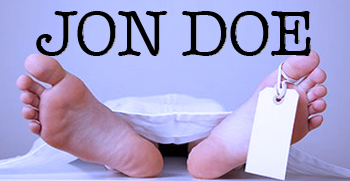