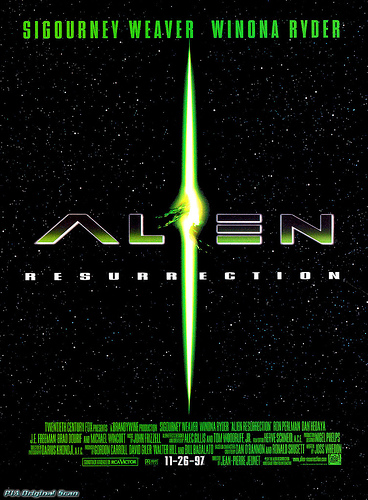 With Ridley Scott's PROMETHEUS next week, I'm sure you, like me, can’t wait to dive into that universe that Scott, Dan O’Bannon, Ronald Shusett, H. R. Giger, and many, many others created more than 30 years ago.  ALIEN has haunted me my entire life.  I still have ALIEN dreams.  They are horrifying to me – I think the Xenomorph is possibly the most frightening monster ever created in science fiction.  As Ash in the original ALIEN said, “I admire its purity.  A survivor, unclouded by conscience, remorse, or delusions of morality.”  H. R. Giger’s creation still resonates.  Its sole motivation is to propagate its race, and yet the Xenomorph suggests something far more sinister, something along the lines of H. P. Lovecraft – not only are we insignificant in the universe, we barely even register as meat.  There are epic things happening out there, ALIEN suggests, and humanity factors only as grist to the mill.

Whether or not PROMETHEUS is truly a prequel or not is irrelevant; the new film seems to explore that concept even more than the original ALIEN does, and so spiritually it very much is a continuance to those ideas.  To that end, in anticipation of Ridley Scott’s return to science fiction, I’ve decided to write about the ALIEN saga as a whole, counting backwards. I’ll begin with ALIEN: RESURRECTION, then it’s David Fincher’s maligned (wrongly, in my opinion) ALIEN3, to James Cameron’s war movie ALIENS, and at last, to Ridley Scott’s ALIEN, the movie that started it all.  Missing from this countdown are the ALIEN VS. PREDATOR movies.  And the reason is quite simple: they’re terrible, unworthy of the ALIEN name (and the PREDATOR name, to be honest).  I’d much rather stick with the original series, and work my way up.  So, for your reading pleasure, PERFECT ORGANISM, my retrospective into the ALIEN films, from last to first.

One thing is certain with this series – the movies get better the further we go.  1997’s ALIEN: RESURRECTION is a creative disaster, a failure of tone and theme that regardless of its returning character Ripley it barely registers as an ALIEN film at all.  Let’s make no mistake about it – ALIEN: RESURRECTION is a bad movie.  It’s difficult to imagine where to place the blame: on Joss Whedon’s script (which was studio-tampered with from day one), or on Jean-Pierre Jeunet’s direction, which felt at odds from the rest of the series.  Possibly it was the lower budget, or the strange turn in Ellen Ripley’s (Sigourney Weaver) character, or the tone, or even the unmemorable score.

But the end product is equally frustrating and fascinating; frustrating because of how much the movie gets wrong and fascinating because we are watching one of our most beloved geek artists find his footing.  Even when it misfires you can see Joss Whedon figuring out his own style in it.  You can definitely see Ripley in Whedon’s characterization of Buffy, and you can see the shadows of the Serenity crew in the crew of the USS Betty.  But it’s unclear what belongs to Whedon and what belongs to the massive rewrites that the script underwent while under Jeunet’s direction.  Looking for someone to blame for ALIEN: RESURRECTION is almost impossible because there are too many cooks in this particular kitchen that we can point fingers at.

RESURRECTION’s shift in tone is completely wrong.  Now, I’m not against anyone taking a little risk and changing up the ALIEN universe a bit, and I imagine that the producers at Brandywine were open to something perhaps a little lighter than the elegiac ALIEN3.  Basically, they wanted to capture that ALIENS lightning in a bottle, while keeping the film as its own individual movie.  In Jean-Pierre Jeunet they got a director who, with his previous films (i.e., THE CITY OF LOST CHILDREN), showed visual promise and got great performances from his actors, and had a sensibility that might work with what the producers were planning to do, which was revitalize the franchise and pull it out from the doldrums of ALIEN3.  (I’ll mount my defense of the third film in the next column, but even that movie’s fans have to admit that the movie takes the audience into a deep dark hole and just abandons them there.) 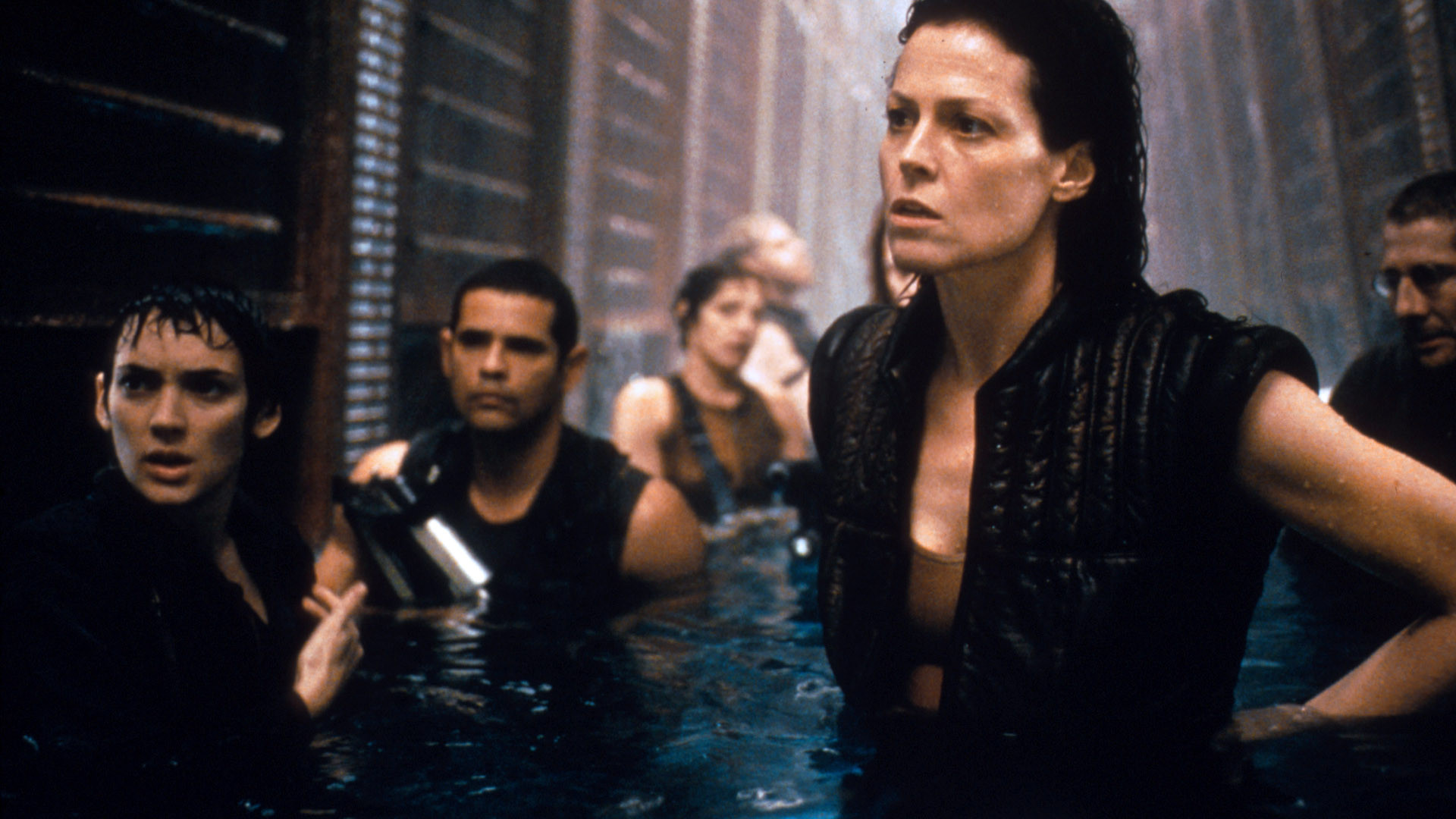 But if the endgame was to bring the franchise back to the action and peril of the second ALIEN installment but with some finesse, TV showrunner Joss Whedon may have been in over his head before the first keystroke. With this being his first solo work after the original BUFFY THE VAMPIRE SLAYER with Kristy Swanson, he’d yet to fully entrench himself as a Hollywood movie screenwriter.

Now, I’m a Joss Whedon fan.  I love how he cuts through genre tropes with a chainsaw and gets to the heart of his characters.  One of the primary rules of writing is “Simplify, simplify, simplify,” and Whedon seems to know how to do that almost effortlessly.  But, and I say this in the nicest way I can, he was all wrong for the ALIEN franchise.

Some of that wasn’t his fault, of course.  The studio and the production company were married to the idea of Ripley returning to the series in some fashion, so Whedon was trapped with the task of figuring out how to make that work.  Cloning, obviously, was a possibility, and the idea of melding Ripley with the alien seemed potentially good on paper.  But too much of the script is centered on that conflict, and the aliens actually feel incidental for it being an ALIEN movie.

Celebrated French filmmaker Jean-Pierre Jeunet is an interesting choice as a director, and the idea of the ALIEN series delving into dark comedy is an intriguing one.  Jeunet is no stranger to that genre.  He’s a playful director, a visual stylist with striking imagery.  You would think, as a choice for the ALIEN franchise, that this would be a no-brainer.  But Jeunet approached the material very much in a work-for-hire capacity, and it shows.  There doesn’t seem to be much influence from him on the script at all.  Scott, Cameron, and even Fincher put themselves into the final product of their respective films, but not Jeunet.  He came, did his job, and left, which is probably what the studio wanted but the result doesn’t feel passionate at all.  It doesn’t feel like it came from the heart. 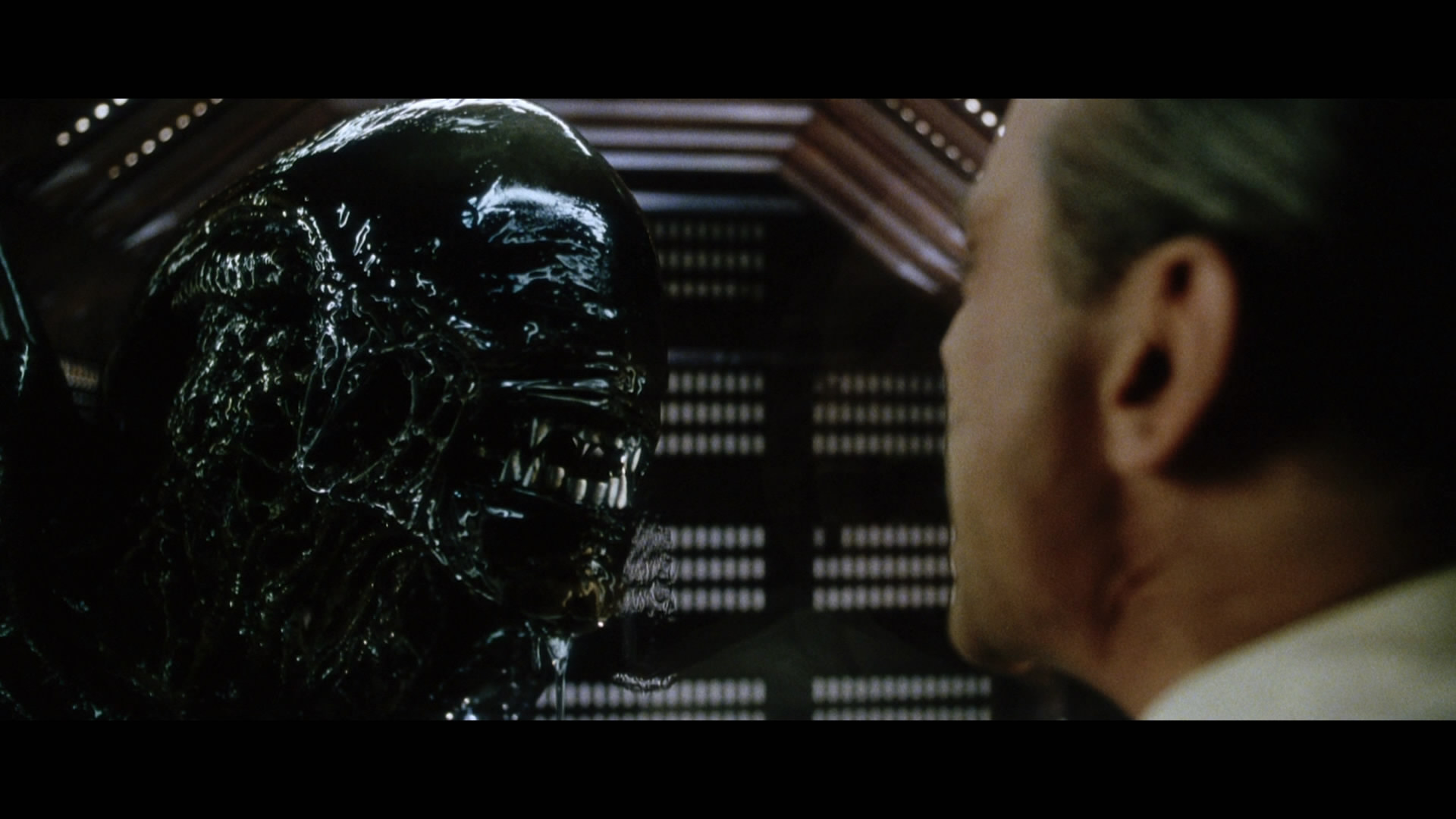 ALIEN: RESURRECTION has several specific issues that I’d like to address, and the first one is the aliens themselves.  This may sound nitpicky, but the creatures in the film simply aren’t scary.  There’s something sexual, terrifying, and, well, alien about the Xenomorph.  In RESURRECTION, they just look a lot wetter.  H. R. Giger’s original design is a beautiful thing – it’s just aesthetically wrong in all the right ways, much like reading about a Lovecraft creature.  The aliens in RESURRECTION aren’t much different, but somehow they feel old hat.  Seeing them in action, with the camera full-on, takes away some of the mystery and splendor of their form.  Even in ALIENS Cameron never gives us one long look at them except for the Queen, and she’s shot appropriately with a scope and scale that accentuates her status.  In RESURRECTION, everything’s glazed with jelly and gore, making the creatures look like cheap horror scares instead of the design beauties that they are. 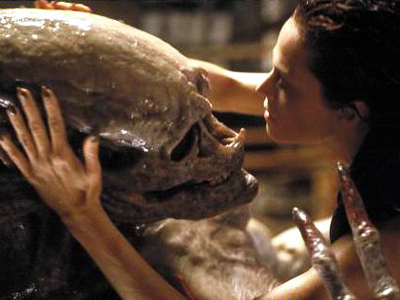 And then there’s the Newborn, the alien/human hybrid. Are you kidding me? I don’t see how that design got past the design stage; it’s completely ridiculous.  There’s nothing of the elegant Giger creation of the first film – which is not only beautiful in its sinister way but also makes sense in the context of the movie.  It really does seem like a “perfect organism.”  The Newborn isn’t meant to be perfect, I realize, but it just looks haphazardly put together.  And it’s not frightening at all, or even sympathetic, really – it’s just a screaming, disgusting thing without any redeeming aspects to its design or character.

The character of Call, played by Winona Ryder, doesn’t fit the movie.  Ryder is a fine actress, no doubt, and again, you can see Joss Whedon’s later influences on the character, but Call doesn’t serve any purpose except to be a sort of audience surrogate, especially for fans of the franchise.  Making her an android doesn’t really fit with the character as well, except to be a link to the previous movies.  From everything we’ve seen of androids previously, she doesn’t work in that context.  The movie does take place 200 years later, so androids of that time would be vastly different, but Call seems to be an extraneous character in a movie already full of them.

So what’s worthwhile about ALIEN: RESURRECTION?  Darius Khondji’s cinematography is impressive, giving the film a nice scope and look.  The underwater action sequence is tense and well-shot, using an environment that we haven’t seen in an ALIEN movie before, even though the scene as a whole makes the movie feel like the weirdest POSEIDON ADVENTURE remake ever made.  Sigourney Weaver does good work as an aspect of Ripley we haven’t seen before, one who has made a kind of peace with her past and with the Aliens.  She’s especially good in the best scene of the movie, when she sees all her clone’s previous iterations, thrown aside like garbage. 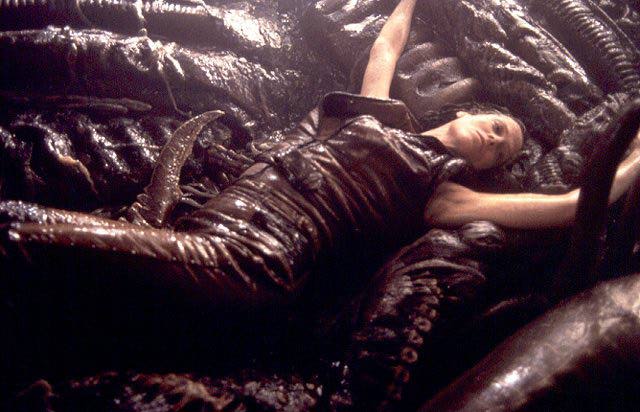 But in the end, ALIEN: RESURRECTION feels like an appendix – an unnecessary film that adds nothing new to a franchise that seemed to know where to end, particularly with the Ripley character.  PROMETHEUS may go to the roots of the ALIEN films, but RESURRECTION takes them to a conclusion that is unsatisfying and, in the end, too silly for its own good.