Houston's Comicpalooza Convention this year was a little of a mixed bag for me; while more people attended than ever before, and I met a lot of great people, I felt that the panel rooms weren't done as well as last year's.  But next year Comicpalooza will be teaming up with Galacticon, the BATTLESTAR GALACTICA Con, and next year promises to be bigger than ever.

My friend, Jen Dracowyrm, hung out with the guys from Odyssee Pictures much of the time.  Now, Odyssee is a local film production company, specializing in genre films, and just getting their footing.  They released a movie called SWEATSHOP to some acclaim, and their next film, jacob, is a step up for them.  They've gotten a well-known character actor in Michael Biehn, and while the movie has problems, it's impressively shot for a low budget horror film (no shaky cam/found footage aesthetic for this movie, thank goodness, it's classically shot).  There's also really terrific gore in jacob, and while some of the performances are a bit over the top, Grace Powell and Dylan Horne do decent work.  Larry Wade Carrell and Stacy Davidson are passionate filmmakers and regardless of the budget they put their heart and soul into their work.  Here's Jen:

jacob:  A conversation with Larry Carrell and Stacy Davidson
At last year’s Comicpalooza, I got to speak with Larry Carrell and Stacy Davidson on their offering of Sweatshop, projected against a wall in a panel room on the 2nd floor of the George R Brown convention center.  This year, Odyssee Pictures gave jacob to the attendees of Comicpalooza 2012.  This was shown on the first floor, projected on a screen smaller than my TV, surrounded by walls made of black, gossamer cloth, with the soundtrack of My Little Pony blaring from another nearby “room”.  Larry called the conditions his film was presented in, “heartbreaking”, yet he kept the audience occupied and mostly in their seats while volunteers set up the projector, divulging factoids (one of the surviving Christine cars makes a cameo in jacob) and answered a call from his father and asked everyone to say hi to him.  The audience obliged.  At the end of the showing, he was rewarded with a Q & A from an audience that was mostly intact throughout the entire length of the film.  The end result was the same:  I like what this little studio is putting out.
The title character (played by Dylan Horne) is a giant in every way but mentally, and has a tendency to cause destruction at the behest of voices in his head, unless quelled by his sister (Grace Powell), appropriately named Sissy, who is also privy to the disembodied whispers.  Otis (Larry Wade Carrell, who also plays Otis’ brother, sheriff’s deputy Billy) is a stock baddie that likes to get drunk and beat his girlfriend, Edith (Krystn Caldwell), self martyring mother to the siblings, all set in a flashback to 1979.  Not a whole lot of inventiveness here; where these film makers shine is with the exploitative bits, but they also have a tendency to make it easy on the eye.
After a visit to A Nightmare on Fannin Street (which eventually came to be called Scream World) haunted house in the 10th grade, Larry was hooked.  In his junior year he opened his own haunted house.  During his many years of working at various different haunted house themed parks a revelation came to him.  Already working with 40 actors a night and doing special effects of all sorts why not grab a camera and put something on film.
Shooting with a Canon EOS 7D, using Final Cut and editing with Adobe Photoshop CS5,  yielded better than expected results for this film.  After studying a few films they liked the look of during preproduction, Stacy Davidson decided to opt for tracks and dollies versus the handheld chaos of Sweatshop.  The sweeps are slow and deliberate and the static shots do well to build tension for some scenes, making nice footage for a trailer with minimal dialogue or just a score for audio.  According to Davidson, there were 50 to 55 CG shots, such as digitally mapping out vehicles and replacing them with those of the era and making a dilapidated house seem new in a double flashback.  Again, job well done, as I had trouble noticing anything near to that many CG enhancements in jacob.
With that being said, this is a small budget, independent horror movie, shot locally, and a sophomore project to boot.  I live in Houston and am enamored with the idea of movies being made by Houstonians specifically and Texans in general, but you put it all hanging out there for the world to see, somebody’s bound to take a swipe at it.  The majority of the performances lack rhythm and conviction and the setting and plot seem to come from a kit where you fill in the blank for dialogue, with a space at the bottom to customize your own ending.  To their credit, Larry Carrell exhibits a more dramatic performance during the final confrontation scene and Grace Powell does more than hold her own portraying the character, Sissy.  Larry and Stacy took these ingredients and made pink lemonade; syrupy and unnatural, and you can’t help but have another glass.  It reminded me of taking a chance on a VHS with an exploitative cover twenty-five years ago on a Saturday night in the horror section of the local video store and having fun with what I decided to take home.
“We try to make movies we want to watch.  If it’s good, then there’ll be enough other people out there, they’ll have the same thing and they want to go see that movie too,” Stacy Davidson told me, while sitting at the Odyssee Films booth, watching the passersby.  “Yeah, if we were out to make a buck, we’d just go out and get jobs,” Carrell confirmed.  When I asked Mr. Carrell the day before if making independent movies gave him financial independence, he said that he hadn’t had a day job for over two years.  He cautioned, though, “I’m not wealthy by any means.  You know, it’s real funny:  One night I’m at Worldfest, I’m winning awards eating steak, filet mignon, sitting with, you know, uh, Lee Majors, then the next night I’m at home with a jar of peanut butter.”
He also said that in conceiving the logo for Odyssee Pictures, they wanted audiences to know what type of movie they were in for, such as the New Line Cinema logo that preceded a myriad of horror films during the 80’s.  To Stacy and Larry, their movies are never filmed by committee and are the vision of the director.  With the overwhelming task of playing dual roles and directing, there were times when Larry Carrell couldn’t check if the scene was framed up and if the lighting was correct, that’s when Davidson stepped in.  Having met almost daily for nearly a month during preproduction, Stacy Davidson was well aware of Larry’s vision for the film. 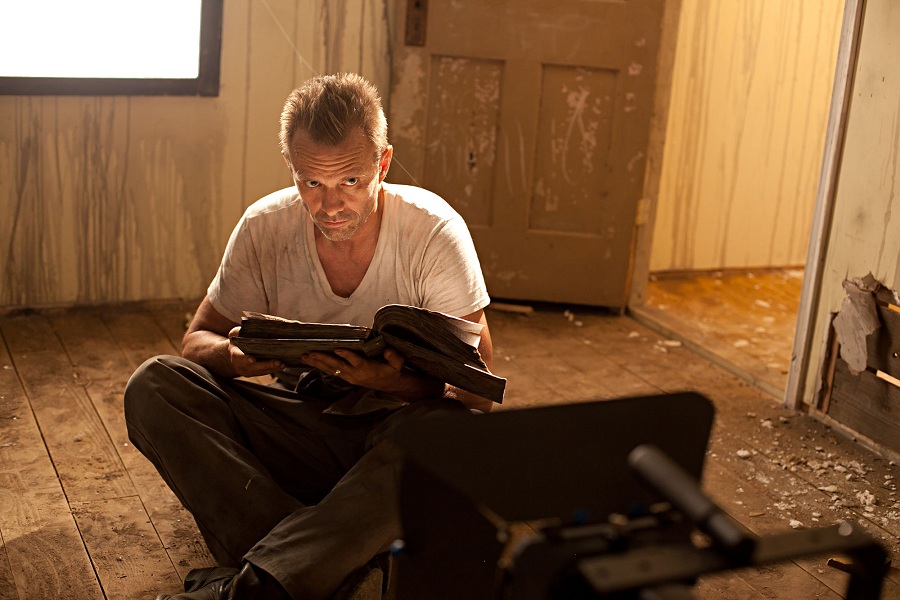 Love of filmmaking was the motivation that led to landing the marquee name, Michael Biehn.  From the inception of the character, Lawrence Kell, Jacob’s biological father, Larry Carrell pictured Biehn for the part.  Despite many telling him it couldn’t be done, he was able to contact Jennifer Blanc, Biehn’s wife.  After convincing her that this would be a role he might want to consider, Larry was able to speak to Mr. Biehn and less than an hour later, the part was cast.  Michael Biehn made it on set for a one day shoot and filmed a few scenes, including a frenetic barroom brawl.  Coincidentally, both Michael Biehn and Jennifer Blanc were present at this year’s Comicpalooza, screening Biehn’s The Victim.
Now seems to be the time for Houston’s burgeoning film industry.  When asked that since it was such a small community, including directors Mel House (Closet Space) and Joe Grisaffi  (Lars the Emo Kid), did they all get along well, Mr. Carrell suggested that it was a mixed bag.  You’re friends with some and others, not so much.  Some were friends in the past, then for whatever reason, those relationships changed, just like any other regional group with interests in common.
So far, the film seems to be on the right track, having had the rights for world distribution picked up by a French company and shopped around at Cannes.  The two mentioned that they were concentrating mostly on getting jacob sold, but are also in R&D for a sci fi flick to be made sometime in their future.  When asked what he recommended to aspiring film makers in the Houston area, unsurprisingly, Mr. Carrell suggested to go out and make it, no matter what anybody says to the contrary.
Later,
Jen Dracowyrm

I'll have more reports from Comicpalooza in the next few days.