Ahoy, squirts! Quint here with a little rundown of some footage shown of Nicolas Winding Refn’s Only God Forgives, his follow-up to Drive.

This footage was all part of a mystery presentation that was hosted by Cannes Festival head Thierry Fremaux. I received a mystery email about 45 minutes prior to the footage running, saying I should be in a certain theater by a certain time for a certain something-something.

Turned out it was about 45 minutes worth of trailers and sneak preview clips, but the mystery was upheld throughout due to my ignorant American inability to speak or understand more than a few words of French. Thierry introduced everything in his native tongue, so it wasn’t until I heard something like “French-french-french-frenchy-french-Nicolas Winding Refn-french-french” that I knew we were seeing some footage from this film.

We didn’t see much, just an extended scene, what I’m told is the beginning of the movie, but from I’ve seen I can say without a doubt that this might not be a sequel to Drive, but it feels like a shared universe. 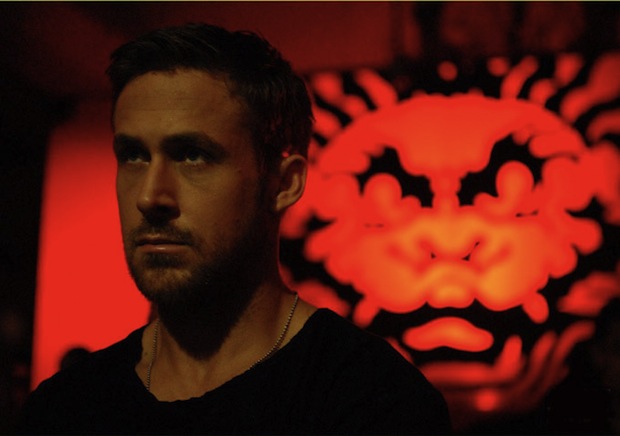 Of course there are a few Drive touchstones in the footage: long tracking shots, liberal use of neon lighting (in this case purple and green) and a silent, but violent Ryan Gosling.

The footage opened with a long dolly shot down a dark and exotic hallway, overlaid with titles in a foreign language I’m pretty sure was Thai. As you can imagine, already not fully understanding the intro, I was a bit confused.

It was also confusing that the dolly tracks were still visible on the floor. I’d guess those will be removed digitally in the finished film, but they oddly fit with the gaudy font and foreign titles, so maybe they were intentionally left in.

There’s not a whole lot to the footage, honestly. The camera finds a room in what now seems to be a club of some sort, possibly a high-end strip club. Two Thai men in white suits sit laughing on a long couch in one corner, Gosling sits in another staring at a nervous looking girl holding a microphone. She’s not singing or looking like she’s about to sing, just standing there looking sad and lost in her thoughts.

Gosling stands abruptly, walks calmly over to the two Thai men having a good time and proceeds to smash one of the men’s drinks into this face, shattering the glass against his teeth.

Punches are thrown, Gosling dominating the fight, which continues out into the hall where Gosling grabs the hurt man by THE MOUTH (he’s lying on the floor, gasping in pain and Gosling just goes ahead and sticks his hand into the dude’s mouth and drags him down the hall by his upper jaw) and throws him out of the building.

The man’s friend kicks Gosling from behind, they brawl and Gosling ends up not only beating them both, he decides that’s not enough and removes his belt and starts a-whippin’.

That’s it. So, yeah, no real grasp of the story, but some good old fashioned silent-but-deadly Gosling violence.

Like I said, tonally this feels like it could exist in the Drive universe, which is a good thing in my book.

Also screened was some footage from Wong Kar Wai’s The Grandmasters that was quite beautiful. A little girl watches her father practice a deadly martial art called Bogua in a snowy courtyard. Her narration tells us that her father forbade her from watching him train, but she doesn’t and soon their positions are switched as this little girl clumsily tries to mimic her father while he catches her in the act.

At first he looks sad, then resigned, as the voice over explains that her father told her no matter what she attempted in life, she would become the best at it and then we see him training the girl.

Cut to the girl all grown up (Ziyi Zhang) training alone in the snow, much like her father and with the same semi-Force power and grace. Ice cycles quiver as she punches the air, flakes of snow slam into tree bark and the limbs of a cherry blossom shake as she gracefully moves from stance to stance. 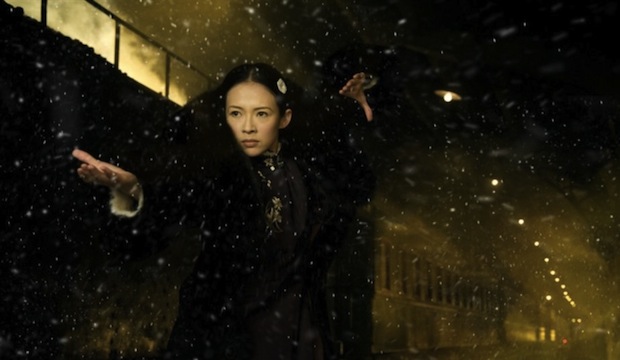 That’s about everything of interest, unless you want me to describe what the Frankenweenie, Brave and Chimpanzee trailers look like with French subtitles.

Now to see if I can get shoot out my Cosmopolis review before my day gets too crazy.