Quint has seen the brand new Jaws restoration and demands that Universal do a wide theatrical rerelease this summer! 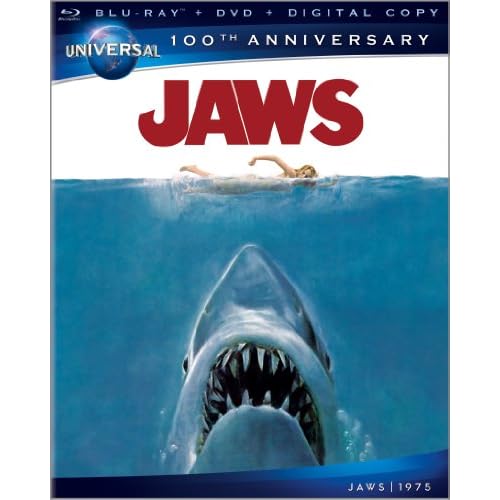 Ahoy, squirts! Quint here. Okay, so there’s no more hemming and hawing, no more “I think this is a good idea.” We’ve moved past that stage now. I’m in full on demand mode. I’m Hans Gruber. I’m Moses. I’m not asking anymore. Universal you simply must re-release Jaws wide this summer.

You have no excuses now. You’ve already paid for a restoration that made this Jaws obsessive weep tears of absolute joy. You have a 4k print that premiered to a room full of Cannes badgeholders and people STILL screamed in the film. Still.

This 4k print is the best the film has ever looked, like watching the negative run, and looks like it could have been shot yesterday.

Now, our friends across the pond in the UK are getting a theatrical rerelease this summer and I’m happy for them, but it’s not enough. I’m sorry.

For too long US rereleases have been those horrible limited “one night only” DVD projections. You don’t need to rerelease Jaws in 3D, you don’t need to add in digital sharks and rare new footage… all you need to do is put a little money into advertising and you’re going to see the cash continue to roll in on this title.

Treat it like a real release, not some limited special for-movie-fans thing, and the audiences will come.

I know there’s some mid-level exec reading this right now that could very well be keen to make this happen. Here’s what you do, mystery person… tell your bosses it’s a way to inject Jaws back into popular culture and generate higher Blu-Ray sales. That’s your angle!

Blu-Ray is great and I’m psyched to have this one within arms reach, but there’s nothing like watching this movie big, with an audience. Like I said earlier this crowd, which included press from all nationalities, film buyers, people selling films at the fest and cinephiles ranging in age from about 8-80 laughed, gasped and screamed. They were engaged and I’ve seen this happen every time I’ve been in an audience watching the film.

Jaws is not only my favorite movie of all time, it’s one of the most crowd-pleasing films ever put on the big screen. It still works as a drama, an adventure story and a horror film. It’s not old and stupid.

Steven Spielberg recorded a video introduction where he mentioned that upon revisiting his film he found it has aged less than most of his work. The only other movie of his that I think can claim to be more ageless than Jaws is Raiders of the Lost Ark and that just because it was a period film and doesn’t have ‘70s décor and afros on the extras.

One of the most impressive things to me about this restoration is how the film keeps its filmic look while also being ridiculously sharp. You can see the lines on Mayor Vaughn’s wicked blue anchor-pattern coat. You can almost see the light stand reflected in Mrs. Kintner’s glasses when she dresses down Chief Brody. You can easily see the fast decomposition of the tiger shark, skin getting dried up and even ripping where it’s hanging by the tail. You can make out Quint’s fishing line in some shots you couldn’t before as the smart, big fish goes under the boat.

I found my eye wandering around the frame, looking for new details revealed by this restoration… small things, like what’s going on out of windows, the way Brody plays with the wrapper on the wine bottle at the dinner table… and I noticed something I’ve never seen before.

I think there was more to the scar-sharing scene or else Quint was doing something weird under the table during that scene because right after Brody asks about the scar that leads into the Indianapolis speech it cuts back to Robert Shaw and he’s zipping his pants up, belt buckle undone. It’s barely seen in the lower left corner of the frame, but I’ll be damned if that’s not what he’s doing.

I also never noticed a moment where Quint totally blows off Hooper. It’s when they’re packing up the Orca, just as Quint approaches the anti-shark cage. Hooper picks up his scuba tank and holds it out to Quint as he approaches, expecting him to help load the boat and Quint just breezes past him so he can make fun of his shark cage.

It’s quite possible I never would have noticed these little details even on my 62” HD TV, which is another reason why film fans need to see this amazing print on the big screen.

My biggest question going into this was what was going to happen to the sound mix. Word is they were basing the mix on the horrible 5.1 remix for the DVD, which had needlessly canned splashing sounds added and weak gun pops instead of the heavy awesome gun shot sounds.

The theater was a little echoey, so I can’t give a full opinion of the sound mix, but I can say that if the canned splashing sounds were in there they didn’t stick out like they did in the 5.1 mix and the “bitch” in “Smile, you son of a bitch!” isn’t as covered up by the gunshot as it was in the 5.1 mix.

The surround mostly comes into play with John Williams’ score.

I did notice a little nitpicky thing that no one on this earth would give a shit about or miss except for me. There’s a “Yipee!” from two girls who run to the surf after Mayor Vaughn talks his board member friend and his family into the water during the 4th of July beach scene. At least there was. For some reason it’s not in there anymore in this mix. Again, I’m a Jaws nerd, it’s not offensive that it’s not in there… just oddly absent. Wonder what the story is there.

At the end of the day, I’m over the moon that my favorite movie has gotten one of the best restorations I’ve seen to date and if the 4k print was any indication the Blu-Ray will sit next to the Alien and Aliens transfers as some of the best looking Blu-Rays available.

But I’m telling you… don’t fuck around here, Universal. Make the call. US theatrical rerelease. You can find the screens. Play this digital print for a week, put some money into TV spots and ads and see what happens. I think you’ll be surprised by how much free money you can make here.