I’ll write up the crazy-people double bill separately because I’m going to want some room to nerd out on Django Unchained. 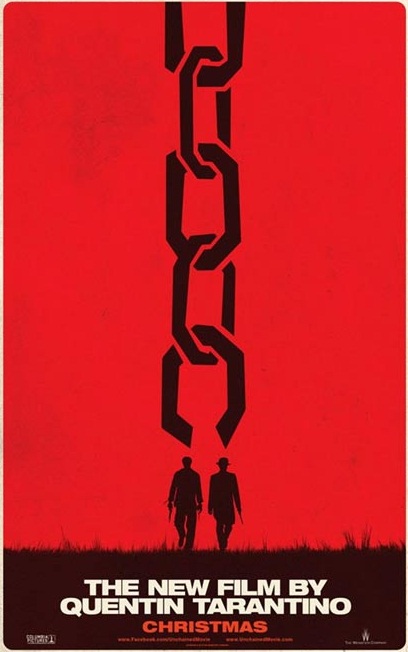 Now, I was already won over by the time we see Jamie Foxx and a grizzled cowboy in a two shot having drinks at a saloon, but the moment I realized who the cowboy was I went from love to obsessed stalker. “What’s yer name?” Franco Nero asks Foxx. “Django,” he replies. “The D is silent.”

To a lot of people that will be a funny little moment in the movie. To western fans, particularly any fan of the name Django to begin with, this represent a blessing… from the original Django to Quentin Tarantino’s carrying the legacy of the name into a whole new world.

I’d say overall we saw about 4 or 5 minutes of Django Unchained and I gotta tell you… I wasn’t anticipating the amount of humor in the movie. I chose not to read the script… and let’s face it, just about everyone has that choice to make. It’s not most secretive script in the universe and has been passed around more times than a starlet in Robert Evans’ Jacuzzi. So, the tone was a huge surprise.

Much like Inglourious Basterds before it, I painted a different picture in my mind, in this case a sweaty southern gothic story. But once Christoph Waltz shows up in his carriage with a giant tooth bouncing back and forth from the roof trying to negotiate a deal with a slave driver I began to get the tone.

Waltz calls himself a dentist, wants Jamie Foxx’s Django and offers to buy him. When the redneck slave-driver doesn’t cooperate, Waltz does some quick violence, with some nice Sam Peckinpah-ish squib-work I might add, and suddenly Django and Dr. King Shultz are paired. 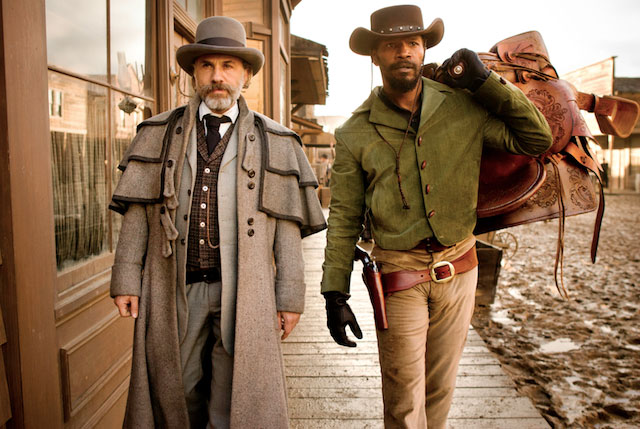 We get a basic rundown in flashback and Waltz dialogue telling us Django’s history, that he’s been separated from his wife and some evil, cruel brothers are the reason for it. Waltz is a bounty hunter and he enlists Django to help him take out The Brittle Brothers, men that Django has a particular interest in seeing put six feet under.

The footage started out serious and somber, but about halfway through James Brown comes on (The Big Payback) and the fun starts. There’s a particularly great scene where Waltz is teaching Foxx how to shoot by firing at a snowman. “Smooth is more important than fast. And more important than smooth is accurate. Once you get smooth, then you get fast!”

Foxx, of course, is a quick learn and blows the snowman’s nose off. “I think it’s safe to say you’re faster than a snowman.” That got a big laugh.

What else was there? Don Johnson at his most Colonel Sanders-y (but with a few more n-words than you typically run into at KFC), Leonardo DiCaprio with some disgustingly filthy teeth, Django in a fancy blue suit, Waltz constantly introducing his horse, Fritz, when meeting people, those aforementioned wet as hell squibs that would give Paul Verhoeven a blood-boner, Sam Jackson with a ring of white hair looking stone-cold serious, the Leone-like character title cards that were one solid color with the drawn outline of the actors as their title hit and… well, Franco Nero.

Again, this thing just looks like a ton of fun and while I was already excited for the movie I’m now officially giddy. All the location work makes the film look huge, Foxx is at the top of his game it appears, Waltz is loveable, funny and dangerous all at once and it just feels like everybody is having a blast.

The movie hits this Christmas, but I wish I could watch it right now.

I’ll be back with a rundown of the footage from The Master and The Silver Linings Playbook in a few. Stay tuned!