The Kidd Vs. THE DICTATOR 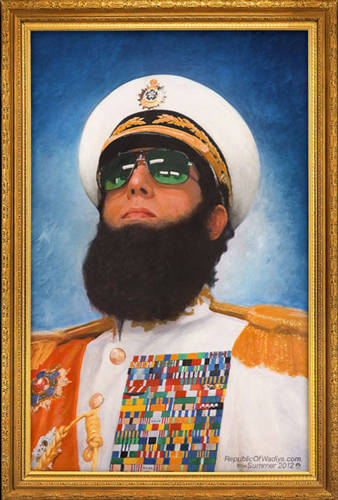 THE DICTATOR certainly isn’t for those without the stomach for racially motivated, potentially offensive humor. In fact, if that’s you, you might as well just stay the hell away from THE DICTATOR because your sensitivity won’t lend itself to finding most of the film funny.  Let’s put it this way… where do you come down on a “Death to the West” dictator of a North African republic playing the video game Wii Terroriist 2K12 unlocking the Munich Olympics stage? Because if you found yourself laughing your ass off, the often-funny DICTATOR has a lot more where that came from.

Sacha Baron Cohen finally takes the scripted route for one of his lead roles as Admiral General Aladeen, the leader of the fictional Republic of Wadiya, who was brought into power at the age of 8 and has been looking to develop nuclear weapons since then. He’s more than happy to try to tell you, the President and the U.N. with a barely straight face that he’s not enriching weapons-grade uranium for any type of WMD and that it’s all for peaceful and energy purposes… but we know that’s just not true. Aladeen hates democracy, hates America and hates Israel, but, unless he wants U.N. inspectors and potentially U.S. forces heading into his country, he’s going to have to convince the world that he’s not the bad guy they all think he is, even though he’s willing to execute just about any of his country citizens for the most petty of reasons, like disagreeing about what shape a missile should be.

This then brings into play a pretty thin plot of treachery and a fight for control over the Wadiyan government involving Aladeen’s uncle Tamir (Ben Kingsley), an idiot body double (also played by Cohen) and greedy oil companies, but that’s all really a means to the end of giving Cohen the floor to poke fun at racism on a far more global scale than he has in the past with these ridiculous stereotypes. Whether it’s against Americans who consider all foreigners to be “A-Rabs” or those in countries with anti-American sentiments, no targets are off-limits for Cohen’s film. Hell, he even has the balls to make a long run of Osama Bin Laden-9/11 jokes, and, even as someone who grew up in the NY/NJ area and was deeply affected by the events of that day, I couldn’t help but laugh at his approach to crafting something humorous from that. When you can generate laughs from that, you’ve got a gift, and Cohen puts it on full display here. 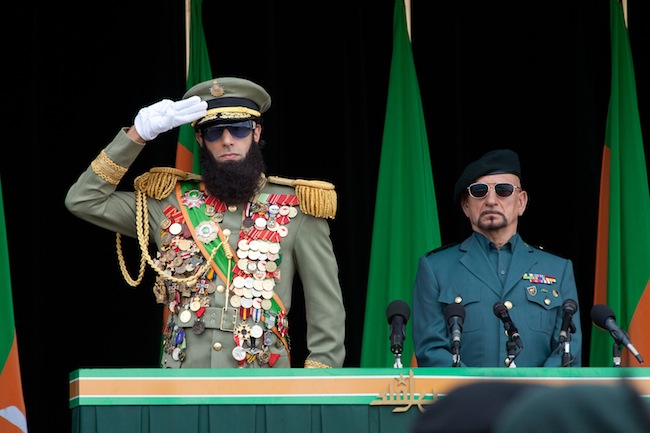 While there is a bit of romantic comedy wedged in the middle for some reasons with Anna Faris, that’s THE DICTATOR’s weakest aspect. It’s not really a vital part of the barely there story as it is, and serves more as a soul-searching avenue for Aladeen to realize he’s not really the prick he’s always been. However, this dictator gone soft idea, which feels more like filler to get THE DICTATOR to its full 83 minute running time, just further shines a light on the character when he does rule with an iron fist, which makes for the film’s best moments.  The freshly converted Aladeen soundtrack – Wadiyan versions of Dr. Dre’s “The Next Episode,” R.E.M.’s “Eveyrbody Hurts,” Dolly Parton’s “9 To 5” and Marvin Gaye’s “Let’s Get It On” – further adds to the type of movie that would put a cell phone inside a woman’s vagina and smash a full frontal penis against a window.

THE DICTATOR has plenty to say in the way of social commentary, and, while he’s using the vehicle of a hated dictator, Cohen’s biting criticism of American culture, American politics, the belief that America is the greatest country in the world and the American way of life rests beneath the surface. It may only peek its head periodically from time to time, but when valid shots can be taken at Applebee’s, Crocs and the hypocrisy of American democracy, THE DICTATOR moves beyond the sight gags to material I wish it spent more time on. It’s good when you get it, but you just don’t get enough.

There are plenty of comedic misses throughout THE DICTATOR. There’d have to be with the sheer volume of jokes Cohen hopes to land.  However, for every few misfires, the ones which land more than make up for them, giving you a steady dose of laughter. And that’s what THE DICTATOR is all about… giving you something to laugh at. The story may not mean much, and the characters outside of Aladeen may not amount to much, but there’s enough to keep you laughing hard at THE DICTATOR to make it worthy of the choice to see it of your own free will.