Nordling Says THE DICTATOR Is Funny But Unfocused! 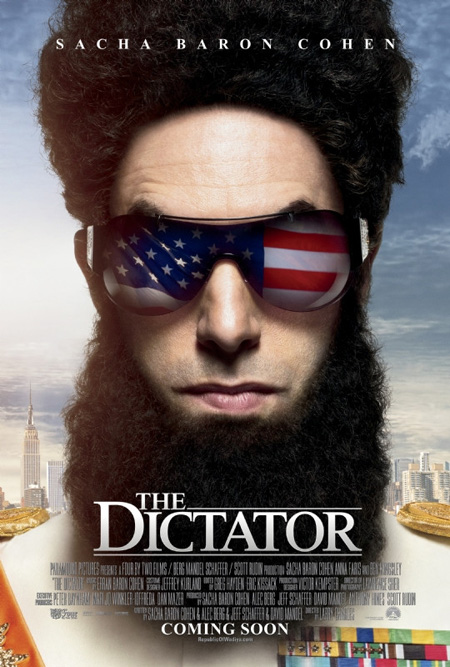 It's odd - BORAT and BRUNO (both directed by Larry Charles) seem much more focused as movies, despite the way they were made.  Then again, Charles and Sacha Baron Cohen had a lot to work with and managed to whittle their improvisational scenes down to a coherent narrative.  THE DICTATOR is a scripted work but feels much more scattershot - it's as if Cohen wanted to make sure he hit every possible target, and instead of hitting the bullseye on one, he manages to wing a bunch of them.

That's not to say THE DICTATOR isn't funny - it often is, much of the time.  Perhaps it's my own tolerance for this kind of humor, but to me there's nothing (save a line or two) in THE DICTATOR that shocked me as much as anything in BORAT or BRUNO.  It's probably the fly-on-the-wall aspect of those films that made me laugh and cringe at the same time, but THE DICTATOR is far more traditional storytelling, and that may be why it's not as successful.

General Aladeen (Sacha Baron Cohen) has ruled his country of Wadiya with an iron fist, refusing to sell his oil reserves to the West, and treating his people as disposable cattle.  But Cohen plays him, strangely enough, as a kind of innocent - deep down, although Aladeen clearly enjoys his power, he truly believes he's the only possible thing that can save his people and his country.

When the UN threatens to attack Wadiya, Aladeen, along with his second in command, Tamir (Ben Kingsley) goes to New York City for a speech at the General Assembly.  But Aladeen is kidnapped, his beard shaved, and before he can be murdered Aladeen manages to escape and hits the streets of New York in hopes to get his dictatorship back, which has been taken over by a body double (also Cohen) and Tamir.  Tamir hopes to open up Wadiya as a democracy, but more importantly, those oil reserves to the West in exchange for a lot of money.

Aladeen meets Zoey (Anna Faris), the manager of a local gorcery collective, and through all his bigoted, sexist ways, finds that he cares for her.  His ideas about his country, the West, and his place in the world begin to change, and Aladeen must get back to stop Tamir from giving Wadiya away to the oil companies.

The humor is broad, and pretty much covers everything - those wanting to be offended will likely find something to crow about here.  Practically every word out of Aladeen's mouth qualifies as hate speech somewhere in the world, but the way Cohen delivers his dialogue is almost sweet in nature.  For all his bluster and evil, Aladeen does have a heart, even if it's shriveled and barely used.  It's in Cohen's nature to play such a loathesome character but with such charm and wit.  Otherwise the audience would have left him and the movie long ago.

Faris does her part, but against Cohen's humor all she can really do is withstand it.  Zoey is a sweet person who manages to see the good in Aladeen, but there are times in the movie that you couldn't blame her if she kneed Aladeen in the balls and just walked away.  Again, Cohen spares no one with his humor - like Trey Parker and Matt Stone, if it gets a laugh, that's all that matters, and egotists and blowhards of all political stripes take their lumps.  But it's at the film's climax that everything comes together and clicks, and it pushed the movie into the "Like" column for me.  Aladeen's speech made me laugh pretty hard, but it comes from a purely political place and exposes much of the folly of the past 12 years.  Even then, the movie still doesn't pull punches for either side.  It's an equal opportunity offender.

My biggest beef with THE DICTATOR is a purely economic one - the movie is only 75 minutes long, and although I'm a believer that a movie's quality isn't about how long it is but how it tells its story, it still stings the pocketbook a little bit.  Cohen and Charles pull out every possible joke they can from the material, and some of it sticks and some of it doesn't.  It's nowhere near as groundbreaking or as funny as BORAT but most of it works, and sometimes, it works well enough that you'll almost forget about those other movies.