Quint chats with director Josh Trank about the technique and emotional hook of Chronicle! Plus he artfully dodges a Fantastic Four question!

Ahoy, squirts! Quint here with a chat I had with Chronicle director Josh Trank. He hit the scene strongly with this film, which caught the eye of Tom Rothman and now Mr. Trank is developing a Fantastic Four film for the studio. I, of course, asked Trank about that and his dodge was artful. Make sure to keen an eye out for that in the interview.

We cover a few things in our interview, mostly about character development and his filming style. Both of those topics cross over into spoiler territory, so be wary if you haven’t had a chance to catch the flick yet.

Without any further ado, here’s the interview! 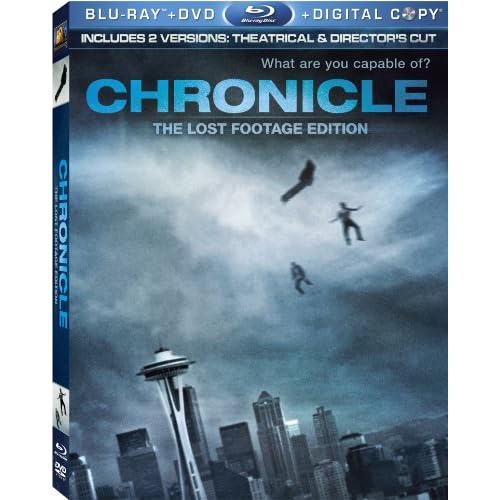 Josh Trank: Wow. I’m really jealous actually. That’s so cool. He (Mondo’s Justin Ishmael) tweeted about CHRONICLE and I’m dying… in my wildest fantasy, I want to see him do something.

Quint: I think Mondo could make an awesome Chronicle poster. So you follow Mondo? You like their stuff?

Josh Trank: I do. One of my best friends is obsessed with Mondo, so I live vicariously through his obsessive fandom. I just love their work. They do the most inspired, cool movie posters. I wish all movie posters looked like what they do.

Quint: Yeah, especially now that Chronicle is out and people have seen it, I think Mondo could do a really awesome poster showcasing some of the bigger set pieces from the last act of the movie.

Josh Trank: Yeah, there’s a lot of imagery to work off of.

Quint: What’s really interesting to me, as somebody who’s not the biggest fan of found footage type movies, I actually found myself very surprised about how much I liked what you did with that style of filmmaking. You were able to use the psychic powers aspect to make it a little bit more cinematic. Was that your approach? You wanted to try to do something inventive and fresh with the format?

Josh Trank: Yes. I wrote a sort of like a five page production plan before we even sold the script to the studio of exactly what I wanted the movie to look like and part of it was a very specific guideline to the camera work; that everybody has a friend who can hold a camera steady. (laughs) Just because a movie is being filmed by an amateur, that doesn’t necessarily mean it has to be “shaky-cam” style. When I was Andrew Detmer’s age I was doing the same thing. I was filming everything I could. This was back in 2001 and we didn’t all have cameras on our phones. I didn’t have a cell phone when I was 17, but even if I did the only cameras that were really around were larger MiniDV cameras or in my case I had access to ¾ inch cameras, so big bulky things.

I would go out and just shoot verite things. I loved filming my friends and just candid moments and when somebody was saying something important I just knew instinctively to zoom in on somebody when they are saying something important or to at least get close. I’m a huge movie fan and I inherently view things in my own eyes as if I’m in a movie. It’s a good way to sort of alienate yourself from kids your own age by doing that, however you know in the case of the pursuit of the young amateur budding filmmaker, that’s kind of all you think about.

So I wanted to work that idea into the cinematography, that there could be this fine balance between verite casual amateur style and a more thoughtful overarching cinematic approach, where in every single scene I would pretty much plan out about five different way to go about it. I’ve never really seen a movie that went all the way like this before. I’ve seen hints of this kind of a style, which is what really kind of excited me about approaching the movie like this. I’m a big cinephile, so I feel like I’ve pretty much seen everything and I do a lot of research, so I knew that we could have moments where we would get conventional type of shots that could communicate cinematic moments as if we are in a real “movie” movie, but without making the audience feel like they are a part of a prefabricated game plan, that they are a part of a pre-fabricated manufactured look.

So, there was a very, very careful approach with the camera work and we definitely had that in mind going forward. In fact, I made it a point to reiterate that same agenda to everybody in the production, because I wanted this to be the most un-found footage found footage movie yet.

Quint: Once it makes the big turn in the third act when it becomes the giant AKIRA style huge crazy action thing and you not only surprise the audience with that turn dramatically, emotionally with the characters, but also with the filmmaking style. I really like how you were able to go to multiple point of views with cell phone cameras to security cameras and stuff like that. I like that you don’t get the full audio of what’s going on in that big finale scene and you have to fill in the gaps in a much more realistic way than if you had somehow cheated a perfect camera with a great microphone in amongst the chaos. 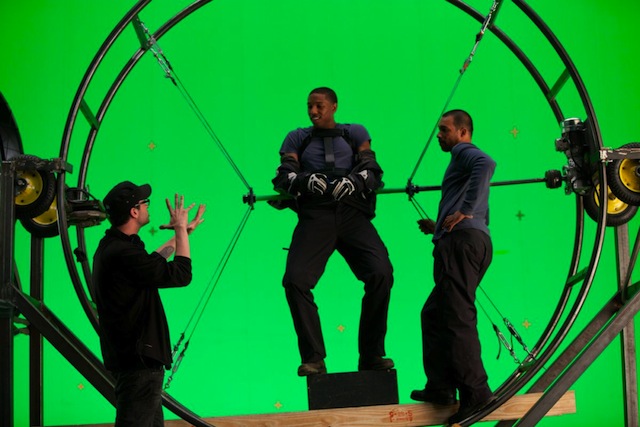 Josh Trank: It’s interesting, because that’s while we were heading toward locking down a final cut of the movie, that was a constant internal conflict. “Should we break the rule?” There ware a couple of moments in the finished product where we do have a couple of close ups where in plausible reality wouldn’t make any sense, like “Why would somebody just zoom in on Matt while he’s screaming at Andrew while there’s all of this incredible stuff going on?” There were moments where we had leeway where we could sort of break that rule a little bit, but you can’t break that rule too much, because that’s something I think the audience would become too keenly aware of. I wanted the audience to not be aware of the style or the cinematography as much as possible, for it to just play out and for the audience to feel like they are participating in what’s going on as if they are really there, you know?

Quint: Yeah, yeah. What helped me, again as somebody who’s not a huge fan of the found footage stuff in the first place, was just how easily I fell in with this group of guys. I liked them. I liked them as characters. Particularly with Dane [DeHaan]… you must have thought you hit the lottery when you found that guy and saw how well he worked with Alex [Russell] and Michael [B. Jordan].

Josh Trank: I think we hit the lottery. That’s really how we felt. I didn’t want the style of the movie to obstruct the audience’s ability to connect instantaneously with the three guys. Everything had to be immediate and personal and intimate. In fact, a lot of performance of Andrew is off screen. Our camera operators had to, often times, walk along side Dane. Even when he was off screen we would still put him in full makeup and wardrobe. We weren’t filming with handheld cameras, we were filming on the Arri Alexa, so it was like we had a full camera crew there, a full movie crew with a lot of things going on, but we wanted to keep it as naturalistic as possible in that sense.

Quint: The emotional hook of the movie… All the spectacle is great and I loved seeing that as a movie fan of course, but really seeing Dane’s work and how he built that character was kind of the reason why I’m going to go back and keep watching the movie over again.

Josh Trank: For me, it’s the same exact thing. As a person who ultimately just really wanted to see this movie as an audience member, this is a movie that I just wanted to see, I felt the responsibility to make all of those things that you just mentioned work in that way. We’ve seen spectacle play out in every Hollywood blockbuster ever. We’ve seen all of these things happen before, but the one thing that we haven’t seen yet is emotion and character development and emotional stakes. We are more drawn to the emotional stakes than we are the look of the visual effects.

Quint: You’re probably really happy that there were a lot of people that went “Man, I really wish Dane was cast as Anakin Skywalker,” after seeing the movie. I think in one movie you pulled off the character arc we all wanted to see in the prequels. 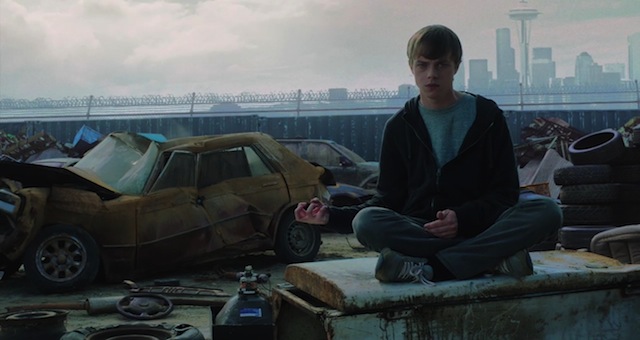 Josh Trank: Reboot! Hey, why not?

Quint: Well before I let you go, since we’re on the subject and Mr. Rothman confirmed that you are developing a FANTASTIC FOUR movie with Fox, I just wanted to touch on that if you don’t mind. I just saw THE AVENGERS and loved it, but it’s kind of sad to me that there hasn’t been a great FANTASTIC FOUR movie. There’s so much potential there and I’m hoping that your approach is going to be a little bit like what you and Max [Landis] did on CHRONICLE in really making us fall in love with the characters…

Josh Trank: You know, I can’t really talk about anything, but what I will say is that I totally agree with you, that there needs to be a great Fantastic Four movie.

Quint: (Laughs) Nice. Cool, well congratulations on the film and I hope to see a Mondo CHRONICLE poster sometime in the near future.

Josh Trank: God, me too. Well, thank you so much, it was really a pleasure.

Quint: Of course man, talk to you later. 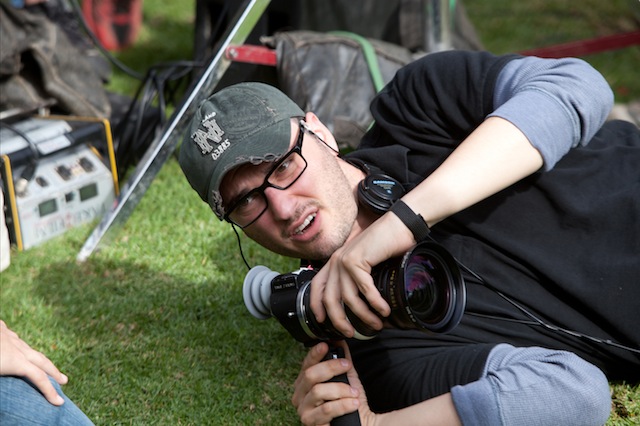 Well, Lord knows I tried to pry some Fantastic Four info out of the man, but alas I got very little from Mr. Trank.