Calling All 35mm Film Lovers! OUT OF PRINT, A Documentary About The New Beverly Cinema, Needs Your Support! 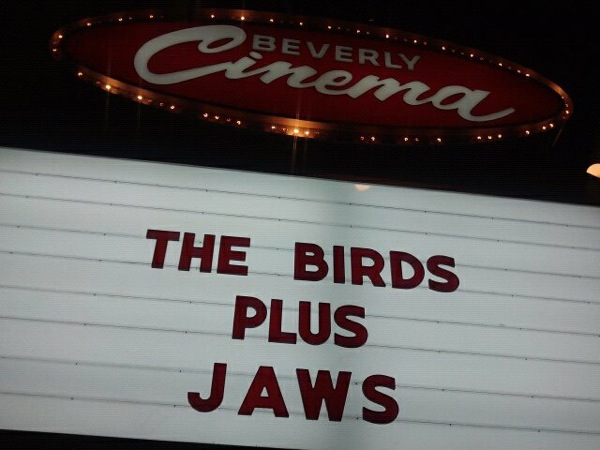 If you've read this site with any kind of regularity over the last five years, you know my feelings about the New Beverly Cinema. It's a sanctuary for movie lovers, a place that, in the span of a week, could easily screen a Peter Greenaway double feature, John Frankenheimer's SECONDS and William Beaudine's BELA LUGOSI MEETS A BROOKLYN GORILLA - all on 35mm (and that's seriously happening this week).

Many of my fondest moviegoing memories in Los Angeles involve the New Beverly: it's where I flipped through Greg Nicotero's copy of the Necronomicon before Edgar Wright's double feature of EVIL DEAD 2 and RAISING ARIZONA; it's where I was fortunate enough to moderate a wild, free-flowing Q&A with Peter Weller after a screening of THE ADVENTURES OF BUCKAROO BANZAI: ACROSS THE 8TH DIMENSION; it's where I saw GRINDHOUSE on opening night with a gloriously raucous crowd (this remains one of the greatest moviegoing experiences of my life; I can still hear my departed friend Paul cackling with delight through the last twenty minutes of DEATH PROOF).

I am indebted to The New Beverly Cinema. Big time. And while I'll never come close to paying back that debt, I can at the very least call your attention to a Kickstarter campaign for what will surely be the definitive documentary on this very special theater.

It's called OUT OF PRINT, and it is Julia Marchese's dream project. If you've ever gone to the New Beverly, you've almost certainly encountered Julia (possibly at the box office or the concession stand); if you've never been, you might've signed her "Fight for 35mm" petition (and if you haven't done that yet, get on it). I've known Julia for about five years, and I can think of no one better suited to telling the history of this magical repertory theater. And let me assure you, there are many stories to be told: of the late Sherman Torgan's dedication to classic cinema (which established the theater as an informal film school for aspiring writers and directors), of its unlikely longevity in a city notorious for plowing over its past, and of colorful regulars like Lawrence Tierney (whose unpredictable behavior made attending the theater an occasional adventure).

There's a very entertaining and inspiring documentary to be made about The New Beverly, and Julia will have access to an impressive array of filmmakers and regular old moviegoers. She's already confirmed interviews with Edgar Wright, Kevin Smith, Patton Oswalt (Keeper of the Tierney Legend), Joe Dante, John Landis, Joe Carnahan, Rian Johnson, Stuart Gordon, Allison Anders, Mark Romanek, Tom Holland and Fred Dekker. Knowing how many great directors, writers and actors have passed through the New Bev's doors, I've a feeling that group will expand considerably as she moves forward.

But she can't move forward without a little help from the people for whom the film is intended. So I urge you to visit OUT OF PRINT's Kickstarter page and donate whatever you can spare. This film is well worth supporting. I believe in Julia's ability to make a terrific documentary. But enough of my yappin'! I'll let Julia make her case...