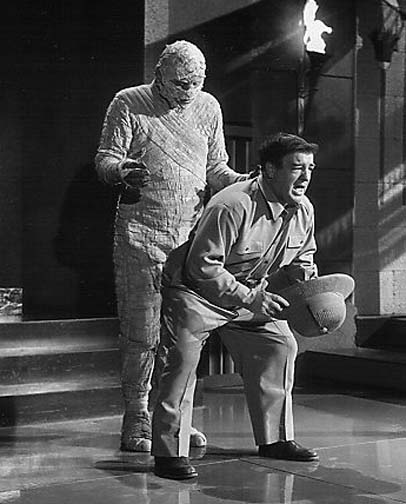 A day after celebrating their centennial via an email of 100 fun facts, Universal Pictures has announced that they've locked down Alex Kurtzman and Roberto Orci to a two-year first-look production deal. And what do you, the potential paying customer, get out of this? How 'bout those rebooted VAN HELSING and THE MUMMY movies you've been clamoring for.

THE MUMMY will be written by Jon Spaihts (whose PASSENGERS remains one of the great unproduced screenplays of the last twenty years), which is a definite upgrade from Stephen Sommers -  provided we get the PASSENGERS Spaihts and not the guy who banged out THE DARKEST HOUR. It would be nice if they tried something more in the vein of the 1933 film, but fat chance you'll ever see a slow-moving Mummy (or anything) again.

As for VAN HELSING, Tom Cruise is evidently attached to take Hugh Jackman's sloppy seconds (adjust your Hollywood power rankings accordingly). There is no director assigned, but I'm sure they'll get someone real good.

Here's the whole press release for your reading pleasure...

UNIVERSAL CITY, CA, May 1, 2011—Universal Pictures today announced the studio has signed a two-year first-look production deal with one of the leading writing/producing teams in the entertainment industry, Alex Kurtzman and Roberto Orci, and their K/O Paper Products banner. The duo will kick off their new relationship with Universal by reimagining titles from the studio’s library including Van Helsing and The Mummy. The announcement was made by Universal Pictures Chairman, Adam Fogelson and Co-Chairman, Donna Langley.

Kurtzman and Orci have collaborated with some of the industry’s top creative minds including J.J. Abrams, with whom they wrote the third installment of Mission: Impossible, which grossed nearly $400 million at the worldwide box office. In 2007, they wrote Transformers and went on to write Transformers: Revenge of the Fallen in 2009. Together, those films grossed more than $1.5 billion worldwide. More recently, the pair wrote and executive produced 2009’s Star Trek, which grossed more than $385 million worldwide. Accompanying their impressive film resume, Kurtzman and Orci have found tremendous success in television, having created the series Fringe, writing/producing Alias and in 2010, producing the reboot of Hawaii Five-O. They also currently executive produce the highest rated show on Hasbro’s The Hub, Transformers Prime.

“Alex and Roberto are extraordinarily talented writers and producers who know the value of a great story in building successful tentpole films,” Fogelson and Langley said in a joint statement. “They have been a major part of some of Hollywood’s biggest movies and television shows in recent history, and we’re eager to have them build on that success at Universal.”

“We’re thrilled to call Universal Pictures our home,” said Kurtzman and Orci. “From the moment we sat down with Adam, Donna, Peter, Jeff and the entire Uni team, there was an instant flow of inspired ideas. They really understand the importance of building a strong creative team and giving our shared projects their full support. We’re proud to start making movies that will live as part of Universal’s enduring legacy.”

Kurtzman and Orci’s K/O Paper Products will develop and produce a modern reimagining of Universal library titles including The Mummy, alongside producer Sean Daniel and writer Jon Spaihts. The pair will also develop and produce Universal’s reimagined Van Helsing, with Tom Cruise attached to star in and produce the film.

Kurtzman and Orci’s upcoming projects include writing Sony’s next installment of The Amazing Spider-Man; producing Now You See Me, for Lionsgate Summit, set for release in March 2013; and producing Orson Scott Card’s Ender’s Game, also for Lionsgate Summit. Kurtzman and Orci wrote and produced People Like Us, which marks Kurtzman’s directorial debut and is scheduled to be released in June 2012, and wrote and produced the second installment of Star Trek, set for release in 2013. The pair most recently rewrote All You Need Is Kill for Warner Bros., with Tom Cruise attached to star, Doug Liman to direct and Erwin Stoff to produce.

Kurtzman, Orci and the rest of their K/O Paper Products team, including President Bobby Cohen, will be housed on the Universal lot. Former assistants Ben Kim and Kim Cavyan will come aboard as creative executives. Kurtzman and Orci are represented by CAA and attorneys Michael Gendler and Kevin Kelly of Gendler & Kelly, APC.