The pics show Quinto wearing some variant of Starfleet uniform or attire.  Interestingly, it's the exact same type of uniform Benedict Cumberbatch is wearing in THIS photo, which leaked earlier this year.  Note the emblem imprint where the uniform "insignia" usually is - I'd say this is simply where the standard "badge" is supposed to be attached, but it appears identical on Cumberbatch's costume when seen during actual filming.  Also interesting about this get-up?  No sign of rank denotations at all...on Spock's costume, or on what we've seen of Cumberbatch's.  Maybe there's a jacket or something which goes with it & displays rank?  Or, maybe Starfleet conceits have shifted in this "parallel" timeline?   As we've already seen photos which clearly feature the more traditional, color-coded costumes and insignias, I'm guessing this is some sort of special-purpose, or (not-so) casual garb. 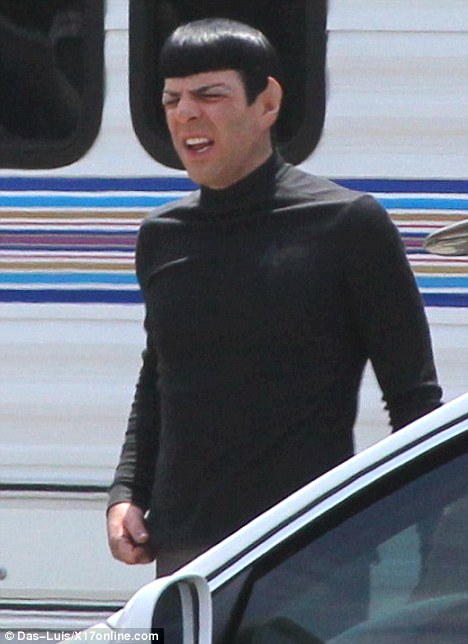 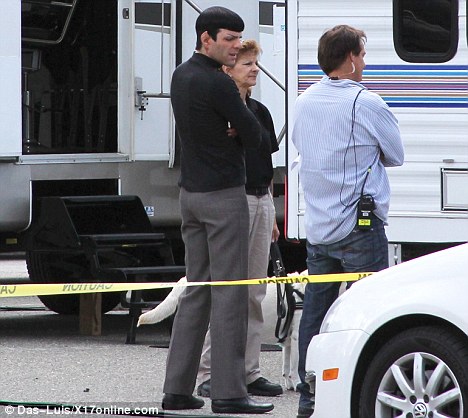 Recently, Collider posted this image of a production crew hat from the film.  The silhouette on the hat seems to dispel rumors that Abrams' Enterprise would undergo a significant redesign for this film...although I'd imagine some cosmetic changes might still be feasible. 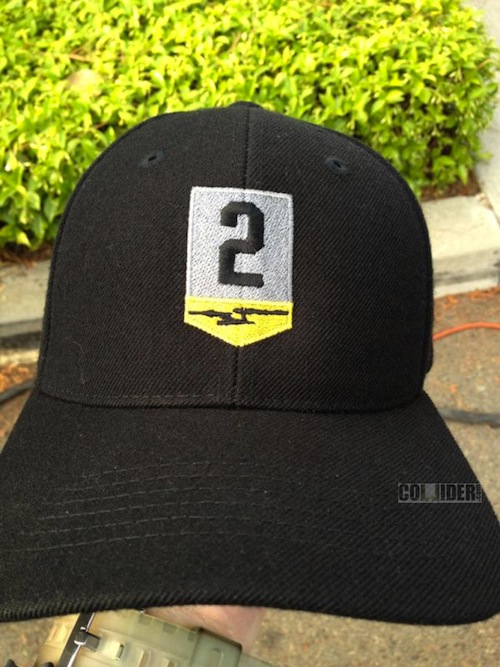 Around the same time, OnLocationVacations nabbed a few shots of foliage from a "red planet" set and its accompanying blue screen rigs. 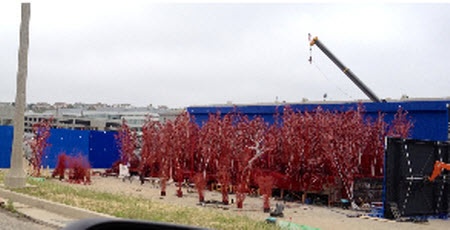 Over the weekend, Leonard Nimoy indicated that he was "talking" about appearing in this new STAR TREK movie (details HERE).  While the actor showing up in the picture would certainly make sense, this the first time we've heard that the possibility is being actively mulled.

In response to the article linked above, an AICN reader reached out to me with further details about whether or not Nimoy will show-up in the movie.  Said reader explained quite a bit about how he or she came across such information.  To many of you, the circumstances by which he/she became privy to this knowledge might seem dodgy or improbable.  HOWEVER...many years ago...inside information regarding another high profile, ultra-Geektastic, even more tightly secured project was leaked via extremely similar circumstances.  So...to folks who've been doing this kind of work for a long time...like Harry and I...our reader's background actually makes quite a bit of sense, and "feels" rather right.  I.e. there is a strong "credibility of circumstance" here.

Given that I do not personally know...thus can not vouch for...any of the parties involved, I need to state implicitly and for the record that there is a margin for error here, and treat everything below this point as very highly educated rumor until it has been further confirmed or disproven.

With that, in no particular order...

** Nimoy's Spock is definitely in the film and will have long and "stately" robes.

** There's a "deep space" smackdown between Kirk and Khan in space suits.  "Flying" suits per my contact.

More as we learn more...watch this space for possible updates.