Quint chimes in with his thoughts on The Avengers!

Ahoy, squirts! Quint here. We’re living in a fascinating time for cinematic storytelling. We really are. Think about what Warner Bros recently did with Harry Potter. They began a film franchise based on a book series that was only about halfway done and not only did the films turn out very well, but they were able to mirror the books in an amazing and unprecedented way. In the novels, the storytelling matured in step with its target audience, going from simple fantasy to intricate phone book-sized epic war story. The movies were able to capture that with almost no loss to continuity (everybody pour a little whiskey on the ground for the late, great Richard Harris).

With the release of Marvel’s The Avengers we have a similar movie miracle. This is the closest we’ll get to the type of immersive storytelling that our current run of great TV enjoys through the sheer ability to build up to their climaxes over hours and hours of character development.

Over the last half dozen years we’ve gotten to know Tony Stark, Bruce Banner, Nick Fury, Pepper Potts and Agent Coulson. We know the history that they share. We know that there’s a little love between Thor and Loki despite being enemies. We know that Steve Rogers is a soldier out of time, a leader that is out of his element. We know all of this before one frame rolls on Joss Whedon’s The Avengers. 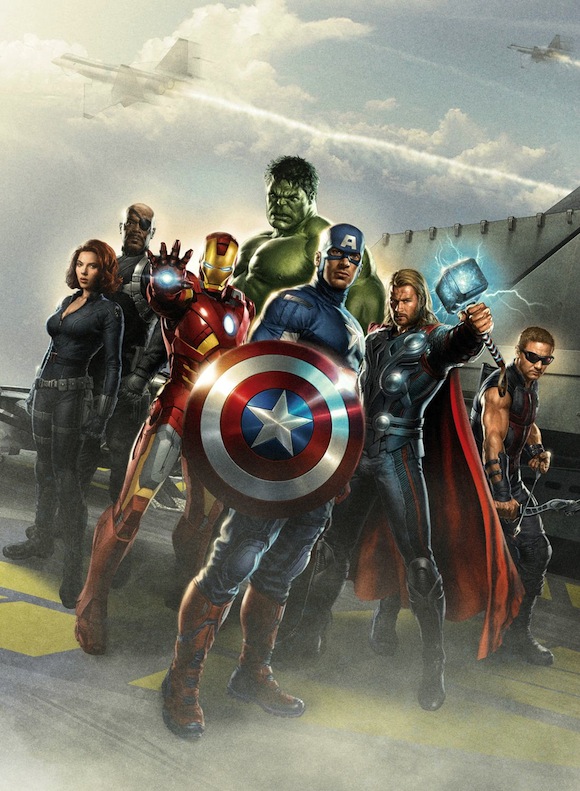 Marvel’s been incredibly smart in setting this up, giving us a moving image version of reading comics. It’s kind of ridiculous when you think about it all. The fact that it all built up to this point and the house of cards didn’t come crashing down due to ego, greed, legal mumbo jumbo or filmmaker/producer hubris is a bona fide miracle.

So, not only is it a marvel (see what I did there?) of build up, but Joss Whedon took a flying leap at the extremely well set up ball and spiked it so hard that there’s a permanent indentation in the earth where it hit. Okay, that’s a bit hyperbolic even for AICN.

My point is he did good. And as the resident non-slobbering Browncoat around these parts I gotta say I was a bit skeptical going in. Firefly was fun, but looked cheap even for early aughts TV. Serenity looked like what the show should have looked like and it didn’t particularly work for me as a standalone movie. I don’t hate the dude, I just didn’t get the fervor for him.

But that guy has decided 2012 is the year he wins me over. Between Cabin in the Woods and Avengers I guess I better go sign up for the fan club and drink whatever Kool-Aid they hand me.

I wouldn’t call The Avengers a perfect movie, but it’s the easiest to like of any of the Marvel films. Once the group begins to form I found zero problem becoming completely engrossed in the film. The first 20 or so minutes are decent, but the movie shifts into second gear when Thor shows up and from that point on it’s buckle-your-seatbelt and hold on to the end if you know what I mean.

All the strongest character work happens between the Avengers as a team starts to form. Whedon’s biggest success is finding ways to make them feel like a team without diminishing the rich characters that we’ve come to know cinematically over the last 6 or so years.

He was also able to do all that while expanding on both Black Widow and Hawkeye as characters. In fact, they do something very interesting and unexpected with Hawkeye that surprised me. I won’t say what that is, but it happens early and makes for an interesting way to get to know the character’s history.

As you’d expect from Whedon, Scarlett Johansson gets some meaty character moments. Not just badass chick moments, but she gets to kick some brain ass, too. She’s smart and manipulative and Johansson really rocks it. Coming off of her iffy performance in Iron Man 2 she was one of the many pleasant surprises of the film for me.

Downey knows Tony Stark and Tony Stark gets many moments to shine as well. That was less expected since most expected this to be Tony Stark’s The Avengers. The strength of the film is that while Iron Man is a massive part of the narrative it isn’t his movie. It isn’t anybody’s movie, it’s everybody’s movie. Everybody gets a moment to be a badass and everybody gets a meaty dramatic moment.

Chris Hemsworth and Chris Evans are all rock solid, Jeremy Renner gets to actually show us why he’s a good fit within the team, but there’s two MVPs of the movie I must talk about.

First up is Tom Hiddleston. Loki’s alien army isn’t really focused upon. In an odd way they’re not the main threat of the movie, despite their numbers and the amount of destruction that marks their arrival. It’s Loki’s lust for power and the insane intelligence he employs to achieve it that’s the real challenge for The Avengers. He’s having fun and it’s off-putting. Hiddleston juggles going from charming to threatening with an almost supernatural ease.

Giving this group a worthy adversary was crucial to the film working, so the fact that Whedon nailed Loki’s threat is a huge reason why the whole damn thing works.

But as fantastic as Hiddleston is, as perfect as Tony Stark’s relationship with the rest of the group is, the real secret weapon of the movie is The Hulk… which is fitting because it’s kind of the team’s secret weapon as well.

Sure, I would have liked the continuity to have worked out, but with all due respect to Edward Norton and Eric Bana, Mark Ruffalo nails Banner in a way that we haven’t seen on the big screen. He gets to play Banner as someone who has come to terms with who he is. He has executed enough control over “the other guy” that he doesn’t feel like he’s an inch away from cutting his wrists while listening to The Cure the whole movie. 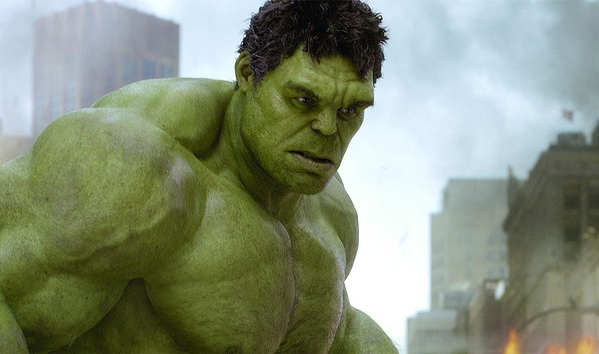 The Hulk himself is perfectly handled. I’m not quite sure they explained why he can Hulk out and pose a threat to his teammates one minute and the next time be a team player well enough, but I can say without a shadow of a doubt that this is the very best, truest to the character version of the big brute that’s made it to the big screen. He gets some really awesome hero moments and a couple of beats that caused the audience to (no shit) erupt into applause. I'm talking rock concert-like applause and cheering.

I’d be remiss in not giving Clark Gregg some props, too. Whedon did a very interesting thing with Coulson this time out. He made Agent Coulson us. He’s a fanboy in the movie. Coulson grew up worshipping Cap and even has some vintage Captain America trading cards that he nervously asks Steve Rogers to sign. He’s a geek! And he’s also brave. When I said everybody gets a great hero moment that includes Coulson.

Nick Fury gets a few himself, but honestly of everybody in the script I think ol’ One-Eye gets the short end of the stick. It’s Tony and Steve that are the ones most in charge of the team, with Fury doing some subtle behind-the-scenes maneuvering. Fury has one legitimately great moment, where he gives a character a much-needed push at a crucial moment, but other than that I didn’t really feel that he was the one pulling the strings of the team. He’s more the kid that sets up the dominos and hopes like hell they all fall the way they’re supposed to.

The only person I didn’t much care for in the movie was Cobie Smulders as Agent Maria Hill. Ms. Smulder is ridiculously beautiful, but she gives some horrible line readings in this film. She doesn't have much to do, so it never became more than slightly irritating. I just hope she makes a similar jump from Avengers to Avengers 2 that Johansson made from Iron Man 2 to Avengers.

On a technical level the film felt just big enough. The TV spots make it look a little cheaper than I felt it looked in the cinema, but the 3D might have played into me overlooking some of the photography. The 3D was actually really good. I did cross my eyes a couple times when those giant metal armored flying slug things fly around New York City, but on the whole I was mightily impressed. Chalk up another victory there since I’m not exactly the biggest 3D fan either.

Bottom line, the movie’s ridiculously fun, each character’s voice is exactly what it needs to be and the chemistry between the group is perfect. The stakes are as high as they need to be, so it doesn’t feel like any one of the Avengers could have stood up to this threat against humanity on their own. In other words, The Avengers is everything a giant tentpole summer release is supposed to be. It’s engaging on a dramatic level as well as a visceral level, is real when it needs to be, but embraces the fantasy of the situation with gleeful delight.

And speaking of delight, there’s going to be a collective thunderclap of crap hitting geek pants upon seeing the big stinger a couple minutes into the closing credits. If you’re a comic book fan it will make you wish they had secretly filmed Avengers 2 at the same time as the first and that we didn’t have to wait until 2015 for the sequel.

Full disclosure, I did visit the set. I don’t like to write reviews for movies I’ve been to the set of because it’s kind of a no-win situation. If I like it then it must be because I felt special for seeing them film for a day and if I hate it then it must be because they didn’t make me feel special enough on the set visit. However, I was by no means an easy sell on this and when I ended up liking it as much as I did I couldn’t help but break this self-imposed rule and chat it up on here.

If you choose to disregard my opinion I understand, but the above is my honest response to the film. I never give you guys anything but an honest reaction and I hope I’ve earned your trust in the 16-odd years I’ve been typing words at you.

But I will say Joss Whedon gives a-MAZE-ing backrubs.

Seriously though, the movie works and thank the movie gods it does or else it would have been a depressing start to the geeky 2012 summer season. 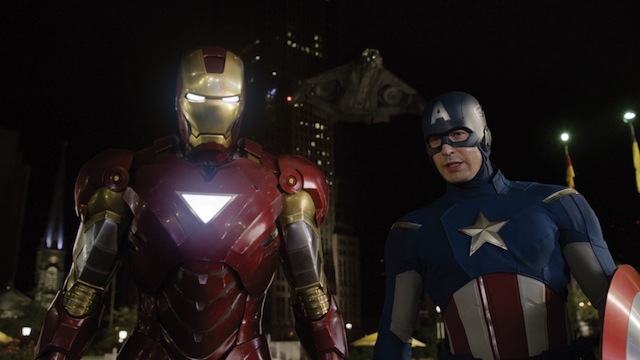