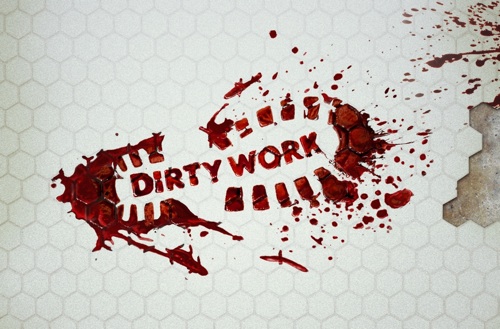 If DIRTY WORK were nothing more than a traditional half-hour comedy series, it would be well worth watching. Created by Emmy Award-winning writer Aaron Shure (EVERYBODY LOVES RAYMOND, THE OFFICE), John Newman and executive producer Zach Schiff-Abrams (DOMINO, BROTHERS), it's an irreverent look into the lives of three Angelenos - Pete (Hank Harris), Michelle (Jamie Clayton) and Roxy (Mary Lynn Rajskub) - who make ends meet by cleaning up crime scenes. They're the folks who show up long after the CSI gang have performed their crime-solving laser show; all they do is scrub, bag, pocket a couple hundred dollars and move on to the next blood-splattered location. It's a brutally mundane gig. For cataplexy-sufferer Pete, it's the steady paycheck that allows him to keep pursuing his recording-artist dream; for Michelle, it's a glacially incremental down payment on a vagina (she's transgender*); for Roxy... well, the job just seems to suit her generally sour demeanor.

But DIRTY WORK, which premieres April 30th on these here internets, is more than just a darkly funny workplace comedy. Much more potentially. Viewed as intended, it's a multi-platform experience that incorporates texts, emails, branching video and other supplemental nuggets, all of which are designed to enhance... and I'm losing you already. Fuck the marketing pitch. Basically, in this bold new era of distracted viewing, Fourth Wall is attempting to involve your phone, laptop and/or iPad in the storytelling process; rather than draw you out of whatever you're watching, they'll supply you with integral information or a hilarious, if somewhat narratively-extraneous scene (e.g. an accidental visit to Metta World Peace's recording studio) - and the more of these supplements you view, the more achievements you rack up, which in turn allows you to watch more supplemental videos (it's kind of like competitive viewing). There are a ton of buzzwords that describe what Fourth Wall is up to (transmedia, gamification, etc.), but, basically, provided the primary content is entertaining, it's just more of a very good thing. 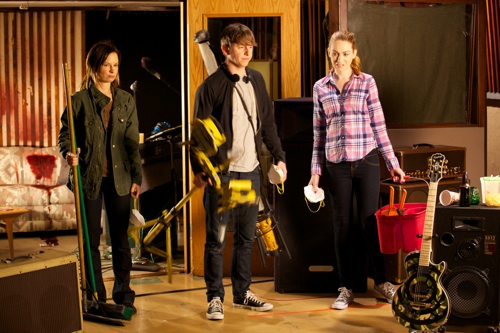 For now. After hanging out with Schiff-Abrams and Elan Lee (chief creative officer of Fourth Wall and co-founder of the ARG collective 42 Entertainment**) for an hour or so at the company's headquarters in Culver City, I have a pretty clear sense of how multi-platform storytelling could be more than a gimmick. With DIRTY WORK, the emphasis seems to be on picking up characters' text messages and, in the show's coolest supplement, listening in (via phone) to Pete's inner monologue as he ineptly flirts with a cute girl. But this is just a toe-dip in the largely unexplored waters of transmedia. Ultimately, once DIRTY WORK and Fourth Wall earn your trust (Lee and Schiff-Abrams are well aware most viewers won't give up their phone number until they're completely sold on the show), they'll feel comfortable divulging more significant narrative elements via texts or phone calls. And this is when we'll find out if there's a future in multi-platform storytelling. And if there is, I think talented horror writers and directors could have a field day with this format. Imagine watching a horror movie that has your phone number, and you have no idea when it might ring or what you'll hear on the other line. There's vast potential here.

Look, I was skeptical about this idea, too, but the DIRTY WORK pilot/demo makes a very good case for immersing yourself in the show. There's a setup for a great joke involving Pete's creepy roommate that only gets paid off in one of the branching videos - ditto a bit centered on Michelle's anxiety about using the facilities at the crime scene. There are also pop-up factoids appearing throughout the show; these are less amusing, but the hit-to-miss ratio is so high otherwise that you don't mind. Lee and Schiff-Abrams also showed me a demo for a Facebook advertisement that incorporates your friends and likes; I'm very interested to see how this works once they've ironed out all the bugs (it goes without saying that everything I've described requires countless hours of programming; and since they're inventing code for a lot of this stuff, these folks are flying blind much of the time).

To entice you into giving DIRTY WORK a shot, Fourth Wall has given Ain't It Cool an exclusive trailer. Check it out!

For more, you just need to hit DirtyWork.com or RIDES.tv on April 30th for the pilot. I'm confident the chemistry of the cast and the quality of the writing will hook you. Give it a shot.

**Long-time Ain't It Cool readers might know Lee as the creator of "The Beast", the pioneering Alternate Reality Game that tied into Steven Spielberg's A.I. back. Throughout the spring of 2001, Harry was obsessed with finding out who murdered Evan Chan. There was even a talkback - now disappeared - dedicated to solving the mystery. Here's one of several posts regarding the game. Entertainment was also behind HALO 2's "I Love Bees" ARG.