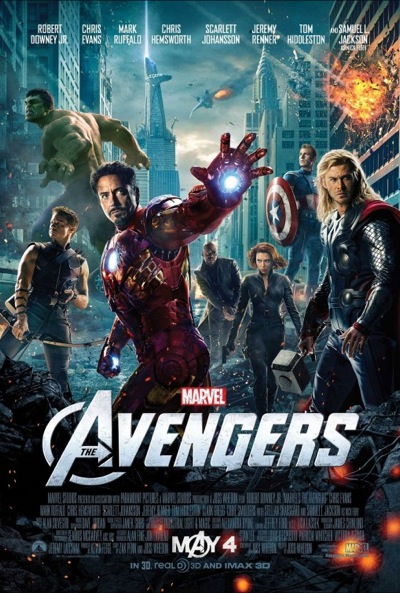 When Marvel Studios first teased the possibility of THE AVENGERS at the tail end of IRON MAN, it was easier to envision how it would spin apart than to conceive of a massive studio movie in which four big-time superheroes, all capable of anchoring their own tentpole release (with a little help from Nick Fury and a few then undetermined second-tier characters), would do battle with a formidable array of villains capable of wiping out humanity. Even as kids, we knew better than to expect an actual Avengers movie; the whole thing just seemed too big, too complicated and, frankly, way too easy to screw up.

But Marvel Studios president Kevin Feige stuck to his plan, and when it came time to greenlight the Avengers Initiative, he wisely placed his dream project in the hands of a writer-director who understood its importance as a filmmaker and a fan. And while Joss Whedon was a little light on tentpole-directing experience, he’s been writing and/or rewriting mega-budget behemoths for two decades. He’s seen how these films can go very right (SPEED) or very, very wrong (ALIEN: RESURRECTION). He’s also spent time in the monthly trenches writing actual comic books for Marvel (most notably THE ASTONISHING X-MEN and RUNWAYS). All told, Whedon was probably the most qualified director out there for THE AVENGERS. All he had to do was manage an intimidating number of story arcs, get on the same page with the project’s alpha dog (Robert Downey Jr.), and give audiences the rousing finish most Marvel films have lacked. No sweat, right?

Whedon’s affection for these iconic characters is evident throughout THE AVENGERS, but it really comes shining through down the stretch, as Earth’s Mightiest Heroes band together for a Manhattan-decimating showdown with Loki and his otherworldly friends. If you had concerns about a guy most renowned for his TV work (BUFFY THE VAMPIRE SLAYER, ANGEL and FIREFLY) delivering the requisite big-screen bang, forget about it. The final forty minutes of THE AVENGERS are spectacular (though I’d highly recommend that you stop watching trailers and commercials, because they’re giving away some of the best beats). Whedon’s stepped up to the plate and put just enough lumber on the ball to knock in the game-winning run.

And now that he’s got a blockbuster on his résumé, it’s time to make a great big movie musical! I discussed this and other stimulating topics with Mr. Whedon at last week’s AVENGERS junket. Spoilers were largely avoided (unless you consider what didn’t make the finished film a spoiler). 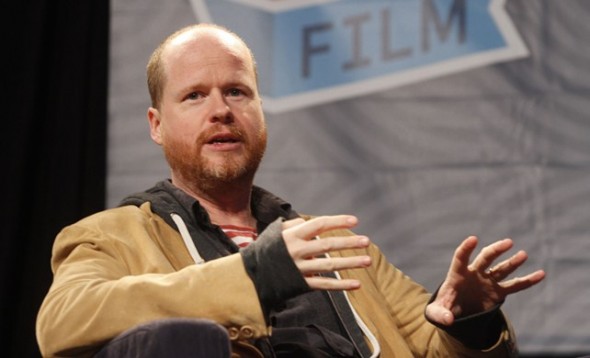 Beaks: I’m curious how writing a massive film like THE AVENGERS compares to, say, writing your run on [THE ASTONISHING X-MEN comic book].

Joss Whedon: Those are pretty similar. When I was on X-MEN, there were certain things they wanted and restrictions they had. I mean, halfway through my run they were like “Oh, we’ve replaced Nick Fury with this woman, Maria Hill.” I’m like, “What? Okay…” “And by the way, most of the mutants have been wiped off of the face of the earth.” “Huh?” You sort of have to take as much information as you can, and then build within that. It’s the same with the movie. “We want the following things,” or “You should avoid the following things.” But that’s not a problem. That’s useful more than anything else. I mean, every now and again you feel a little boxed in, like “How do I pay this off?” But figuring out how to connect all of those dots and avoid all of the sand traps - yeah, way to mix those metaphors - is difficult, but also part of the fun.

Beaks: Sitting down to actually write THE AVENGERS, you had certain parameters, but were you also indulging every childhood fantasy you had had about The Avengers at that moment?

Whedon: Not all of them, but enough of them. Marvel had certain stipulations about what should happen in the story, and that was really all I had to go on. What I got to bring to the party was sort of what the essence of the ideology and the tone of the film was going to be, and how these people were all going to get into the positions that they needed them to get into in this game of Twister. It just… I’ll only ever focus on bringing the audience in through character, through enough believability, and make the stakes big enough that you can actually endanger “Earth’s Mightiest Heroes.”

Beaks: You’ve got to come up with something really big.

Whedon: They had their idea of what the third act should be in one sentence, “Army, Portals…” which was great.

Beaks: Was New York City a part of that?

Whedon: Yes, it was, but since it’s a reveal, I’m not going to say it…

Whedon: But, again, that’s great. “I know where I’m going. That’s fine, all I have to do is find the path,” which is not easy to do, but it is easier when you do have a compass.

Beaks: To set a path for an AVENGERS movie is, I imagine, kind of like working on a mathematical equation sometimes. It’s hard enough when you’re dealing with a regular group of characters. Here you’ve got to serve all of these different arcs. And you have these movie stars. Did you ever feel overwhelmed?

Whedon: You know, not intellectually, but I did find at some point in the process that every time I would read the synopsis of a movie that said “It’s the story of a man…” (Makes crying noises) “Just one? You lazies! I can do that. That sounds great.” Yeah, it took a toll trying to find a place for everybody and a voice for everybody and a pay off and a through line, but, you know, it’s THE AVENGERS. It’s worth it.

Beaks: There was an article yesterday in THE NEW YORK TIMES where Downey said that he has “everything approval” on movies. In writing Stark, was there a moment where you two got together and discussed your idea of the character versus what he thought the character would do?

Whedon: We worked it out together. There were a lot of ways you could go. They were still deciding what they were going to do for IRON MAN 3, so there was some grey area - although they had a concept. There was some grey area there, and we butted heads a couple of times early when we were sort of sniffing each other out, but then ultimately came to a vision of the thing that we both felt was right on the money. Then it was just about sort of honing it. It was actually enormous fun. When he came on set, he came on set as an eager actor and we’d go over the stuff. He likes to make changes. He likes to go through everything. I think he likes to have things fresh, so that he comes at it fresh. I mean, he could read something that was written 400 years ago and make it sound like he just thought of it; that’s one of his great talents. But the process at that point, because we were both so locked into what we were trying to do, was so much fun. I’d be like “Try this! What about [joke spoiler]? Try this.” He was like “Can I do this then?” “Yeah!” He’s anxious for direction. He’s there to make it as good as he can, and as soon as I felt like he trusted me we had the best time. There were one or two things where he was like “I’m not comfortable with this” and I’m like “I know, and here’s how we are going to change that.” It’s like we could read each other pretty well at that point. I would say it was one of the most fun collaborations that I’ve had.

Beaks: As for CAPTAIN AMERICA, that film, with Stark’s father and his admiration for Steve Rogers… there’s an interesting potential for conflict there with Tony and Howard Stark’s hero worship of Cap. Was there ever anything more about that resentment?

Whedon: There was a ton more. One of the problems we had early on was that I had way more Iron Man, and at some point I realized “This is turning into IRON MAN 3. That’s a mistake for them, that’s a mistake for me, and it’s putting too much responsibility on Robert’s shoulders. He needs to be the rock star who shows up and says ‘Oh, let me handle this, because I’m a rock star.’” That felt very right. But I had written endless scads of pages of him and Steve Rogers arguing, and a lot of it was about [Howard Stark]. Not so much, because his daddy issues had been the thing in the second movie, but enough because of that relationship. Actually the only time Chris and Robert were in the Quinjet, I had a little run about the father, and on the day they were like “We’re not so comfortable with this.” I went “Okay, let’s pull it,” so there’s really just the one comment. But I feel like you don’t necessarily need to say it. It’s there. I mean, Chris is such a father figure as Steve Rogers - even though he’s young and maybe just by virtue of the fact that he is a beautiful fuddy-duddy. Their relationship I think resonates without having to call it back too much. And when he says “And every time I would think ‘You know, your father would never say that’”, I wanted Tony to say “My Dominic Cooper father or my John Slattery father? Because they were very different guys.”

Beaks: (Laughs) Yeah, I could see where that would be confusing. Okay, so when you make a film like this that’s going to be a huge gargantuan hit, there’s the expectation that this buys you maybe a little bit of freedom, that maybe you get to make a larger film that you’ve kind of always wanted to do. Do you have that project?

Whedon: I don’t have like, “Here you go, studios!” (Mimes handing over a screenplay) I have a lot of ideas about dream projects, and I haven’t landed on the idea of if there’s one I’d like to parlay this particular moment into. Ultimately, there’s no such thing as a track record. People are still going to be looking over your shoulder. The freedom that I’ve had doing things like DR. HORRIBLE and MUCH ADO ABOUT NOTHING is like a drug. It’s very hard to imagine to not going back to some of that.

Beaks: You obviously have an affinity for musicals. Have you ever thought of doing a big movie musical?

Whedon: Yes, I sure have.

Beaks: Would it be an original?

Whedon: Probably an original. If given the opportunity to write songs, who wouldn’t? Having said that, great musicals are about songs, and great film musicals are about dance. But I love dance, so it’s very different, a film musical than a stage one. With BUFFY, I was evoking something more from the stage really than film, with a few reference exceptions aside. That’s definitely one of those “Maybe I could get this made” kind of concepts, but we will have to see. Sorry to be so vague.

Joss Whedon: Well, it’s always going to be Jerome Robbins. I think he’s one of the great icons of the century.