Nordling's Spoiler Review Of THE CABIN IN THE WOODS! Talkbackers Discuss! 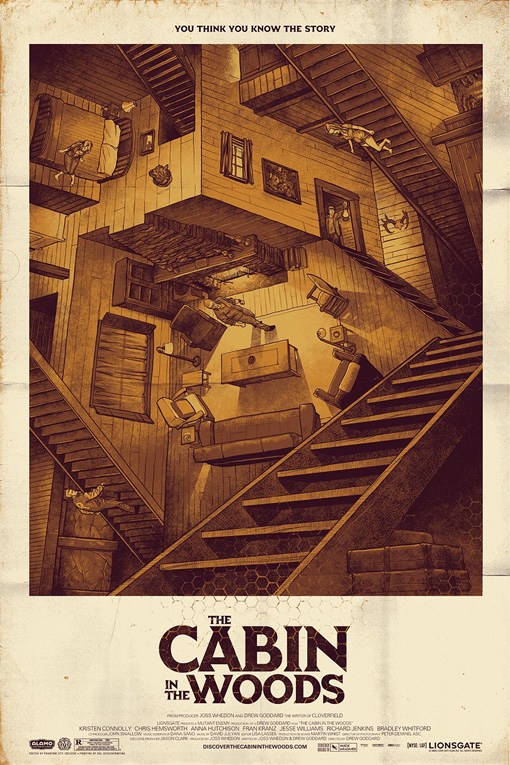 So, you've seen CABIN IN THE WOODS, and want to talk about it.

First off, there's no way to truly spoil the plot of THE CABIN IN THE WOODS.  Well, there is, but it's only a basic plot point, and not even a third of the way in the movie, you have 90% of the information already.  The reason critics have been so reticent to get into it in their reviews is that the way CABIN unfolds itself is much of the fun, and reputable critics don't want to take that away from the audience.  The machinations of the guys in the basement are pretty obvious from the very first scene.

Of course, there is the cameo, which got spoiled right after SXSW, but even that's telegraphed in the movie.  Sigourney Weaver's presence in the movie validates the themes that are being presented, but even knowing she's going to turn up isn't any kind of dealbreaker.  Again, much of the fun of the movie is in the execution.

No, the real spoiler is thematic, and it has to do with the true villain of the movie.  The Elder Gods, to whom this entire endeavor is for.  And it's a pretty bold place for Drew Goddard and Joss Whedon to go.

You know we're the villain in THE CABIN IN THE WOODS, right?

Us.  Horror fans, or just genre fans, or just movie geeks in general.  We are the Old Gods who demand our sacrifices be just so, and when we don't get them, well, we metaphorically destroy the world.  We require our servants to manipulate the scenes to our liking, and we insist that the resolution go how we want it to go.

We say we want to see something different in movies, but we really don't.  If that were true, there wouldn't be so many movies based on other sources, and when a minor change happens that we don't like, we throw a hissy fit.  Remember the fuss over LORD OF THE RINGS when fans of the books didn't get their Tom Bombadil in the movie?  All these superhero movies where the casting isn't just right?  Hell, there were people who didn't like THE MUPPETS because the filmmakers couldn't somehow bring Jim Henson back from the dead.

We are at once fickle, demanding, and raging, and it's no wonder that we get the level of pandering and unsatisfactory movies that we do.  This isn't a blanket condemnation of the movies we've been getting these past few years - most of them have been perfectly fine.  But we all have to admit - and I've been guilty of it myself - that we want what we want, and we can rage like babies when we don't get it.

There's very little surprise in cinema anymore, and I'm not talking about "twists", or, how they should probably be referred to these days, Shyamalans.  Even twists are heavily telegraphed these days - nothing comes out of the blue.  No, what I'm taking about is submitting to the filmmakers and letting them take us on an unexpected journey to places that we may not want to go, but trusting them to see us through.  And yes, sometimes those filmmakers betray our trust, but that should never stop any movie geek from not wanting to take that journey whenever it's offered.

Joss Whedon and Drew Goddard understand that.  And so they give us a look behind the curtain - metaphorically, anyway - in THE CABIN IN THE WOODS, and the result is a validation more than anything about why we should give filmmakers more leeway to make their art, and why our own demands are perhaps what's making some genre movies... well, suck, for lack of a better word.

It's why a movie like TRANSFORMERS gets made - the guys in the booth are trying to feed the beast what it wants.  Well, the beast wants cheeseburgers because the beast has never been let out of the cage to try other things.  And so that's all we get, all summer long.  Cheeseburgers.  That's not a diet.  That's simply pandering.  And if I want anyone to take anything from THE CABIN IN THE WOODS, it's that pandering isn't good for anyone - not the people behind the scenes, and not we the film audience. 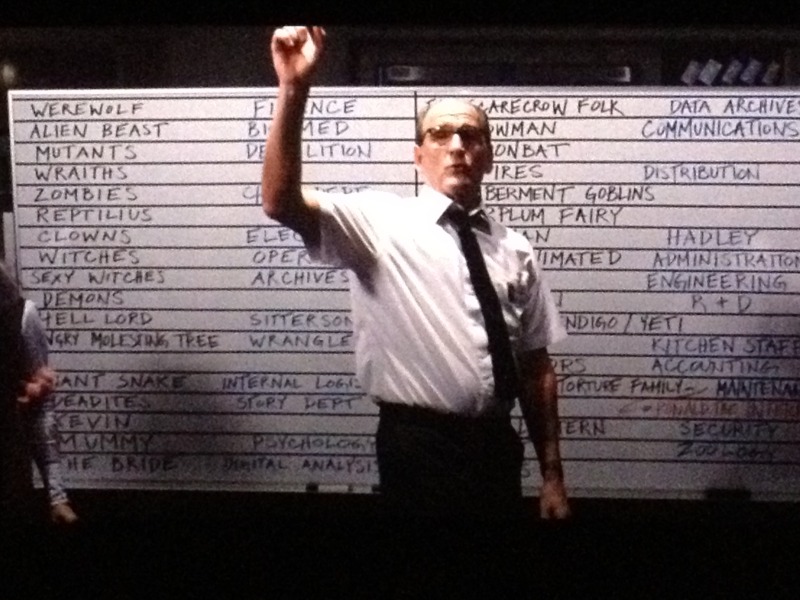 To say THE CABIN IN THE WOODS is meta is an understatement - it flings away ideas that other, lesser horror movies would make as their central thesis.  There is a challenge thrown down in CABIN for not just other filmmakers but movie fans as well - expect MORE.  Don't just be satisfied when you see the sexy explosion robot monster Jedi.  Sometimes - giving us what we want?  That doesn't do anyone any good.  It makes the artists fail to grow as artists and the viewers fail to grow as viewers.  It's the filmmakers job to challenge, to be innovative.  When new art is made, out there in the world, and it shifts the paradigm - that's always, ALWAYS something to be celebrated, even if that art takes us places that we either never expected to go or didn't want to go.  And I'm not talking about being offensive just to be offensive, like Tom Six's work. No, I'm talking about a theme that changes perspective, and that forces us to deal with it, and perhaps changes our views a little bit.

We're so entrenched now, underground, depending on those guys in the room to pull the right levers to entertain and to feed us what we want.  At the end of THE CABIN IN THE WOODS, when those elder gods destroy everything, it's a celebration.  Let's crack this planet open and figure out for ourselves what's next.  That's what great horror - hell, great genre filmmaking - can do, and it's something I hope to find every time I sit down to a movie.

On a more basic level, CABIN is playing with genre conventions.  Once The Purge happens, it's one of the most triumphant moments in horror cinema, in my opinion.  That sequence takes us to where the monsters really dwell, and it's glorious.  CABIN isn't a deconstruction of the horror genre, like some people claim.  No, what it is is a celebration of it, and at the same time it pulls back the curtain and lets us know as viewers that we shouldn't always rely on this system to give us what we need.  Instead, let's just bring the whole thing down to its foundations and start new.  Change is good, especially when the old conventions have us predicting the outcome well before we get it.

There's lots of great horror that plays with convention but none of them ever really blow it apart like CABIN does, and what I really want is for us to find something in the wreckage and make something amazing with it.  To filmmakers, or at least horror producers - you're going to be looking for that special something to take from CABIN in which to make more movies, and dollars to donuts what comes out of it, 75% of it is going to be crap.  If you want to take anything from CABIN IN THE WOODS, it's this - don't be afraid to see it through.  Don't pander.  You want to take audiences to a dark place, and leave them to find their way back?  Go ahead, if you can do it with taste and intelligence.  Hell, you don't even need taste.  Great movies, no matter what genre they are in, require work - work from the audience, not to just go where you lead them but to find the end on their own.  And you might be surprised to find out that movie fans like the work.  I'll do the heavy lifting.  It makes me feel alive.

There's a great line in JURASSIC PARK - "T-Rex doesn't want to be fed.  It wants to hunt."  It's time to start hunting.

Feel free to discuss THE CABIN IN THE WOODS below.  No holds barred.