Ain't It Cool is Screening GET THE GRINGO in Ten Cities on April 18th!

Ain’t It Cool is trying some new things this year…big things. This is one of them.

As reported weeks ago at Deadline…we’re premiering Mel Gibson’s new movie GET THE GRINGO in Austin, with Mel and other talent in attendance. This will all go down on the 18th of April 2012, and it’s going to be a lot of fun. I’ve seen the movie, and boy are you all in for a treat...

…but we aren’t stopping there. Austin isn't the only city that gets to play this time around.

For years, we’ve done advance screenings of movies that we want to support, ones that Harry personally feels need it.

Studios show Harry movies early, he tells them which ones he wants to host an event for, and that’s it. Nothing funny. In this case, I was lucky enough to sit in and watch it with him.

After the screening, Harry told the people at Fox (a studio with whom he has not gotten on well historically) that he’d love to do the same kind of event screening that he’s done in the past. They said they’d love to bring Mel and some talent in for a Q&A, and then I recommended something kinda crazy that Harry and I had been toying with doing. This seemed like the perfect opportunity to try it out.

A constant gripe in the Talkbacks, across social media, and in all of your geek brains out there is that these awesome events only ever happen in Austin.

We’ll do some neat things in L.A., or Chicago, or Houston at times, but what about other Movie Geek strongholds across the U.S.?

Well, not only have we heard you, we’re doing something about it in a big way.

Initially, I was hoping we’d get at least four cities beyond Austin for a total of FIVE…but there’s something that just feels nice and round about TEN. It’s taken weeks of planning and back-and-forth, but we’re gonna pull it off.

We’re showing the movie in TEN cities simultaneously, starting at 7pm CST, and we’re beaming the Q&A out to the other nine live right afterward.

Read on for details on which cities are included and how you can get tickets.

For GET THE GRINGO, here are the cities we’re screening in on April 18th:

We will have Ain’t It Cool editors, contributors, or operatives running and hosting each screening. We also want as close to the legendary Alamo Drafthouse experience as possible at each one, so we’re looking for a respectful audience that’s free of talking and texting and any other disturbances that detract from the enjoyment of the film.

This is our first attempt at waging a multi-city explosion of cool on this radically crazier scale, and we’re hoping to plan more events along these same lines for later in 2012. We’ll be surveying you all at some point, so that we can gauge demand in yet more cities for future events like this.

Next week, we will put a post up in the Top Stories section that includes the contest particulars (as always, an email-writing thing). We will pore over your entries and hand-select the most die-hard among you to watch a bunch of bad men try to GET THE GRINGO. It’ll be the same type of write in to win tickets sort of thing for all ten cities, so get ready with the following…

Harry tells me that you can prepare yourself by thinking of your favorite Mel Gibson action films and the things that make them totally BAD ASS. More specifics to come next week in a post right here in the Top Stories section.

I should also mention that this contest will only be open to those 18 years and older, since the movie is a hard R for violence and language and that sorta stuff.

Talkbackers, tell us once more what horrible sellouts we are for helping get a movie that we like get seen in a theatre by an audience that wants to see it! 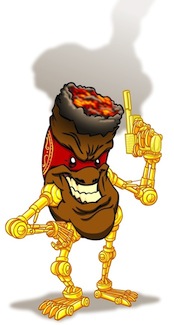