Ahoy, squirts! Quint here. If you’ve been reading AICN with any regularity you’ll probably remember that I’m kind of obsessed with Stephen King’s Dark Tower series. It started in middle school as I was plowing through all of King’s books. The school library had the paperbacks of the first three Dark Tower novels (all that was released at that time) and I read them in a marathon.

The second book, The Drawing of the Three, in particular grabbed my imagination. It had the perfect mixture of science fiction, fantasy, pulpy crime stories and horror. There was also that feeling of electricity in the air. A storm was building. It took three books for Roland Deschain to gather his posse, his ka-tet, for the grander adventure through the horror show of a post-apocalyptic alternate universe towards his destiny: the Dark Tower, a structure that is lynchpin for all realities, including our own.

Through all seven books King has been able to work towards the moment that Roland sets eyes upon his White Whale while still giving each book its own tone and feeling. The Gunslinger is a western, The Drawing of the Three is a sci-fi fantasy, The Wastelands is a sci-fi adventure, Wizard and Glass is a tragic romance, The Wolves of the Calla a samurai tale, The Song of Susannah kind of a horror show in all possible readings of that phrase and The Dark Tower an oddly melancholy epic conclusion that fits every aspect of the previous books into one narrative.

If you’ve read the series you know that King announcing a new Dark Tower book is a bit of head-scratcher. The final Dark Tower book had a pretty definitive ending, afterall.

The Wind Through The Keyhole fits neatly between Wizard and Glass and The Wolves of the Calla, prompting some King fans to call it book 4.5 in the Dark Tower series. 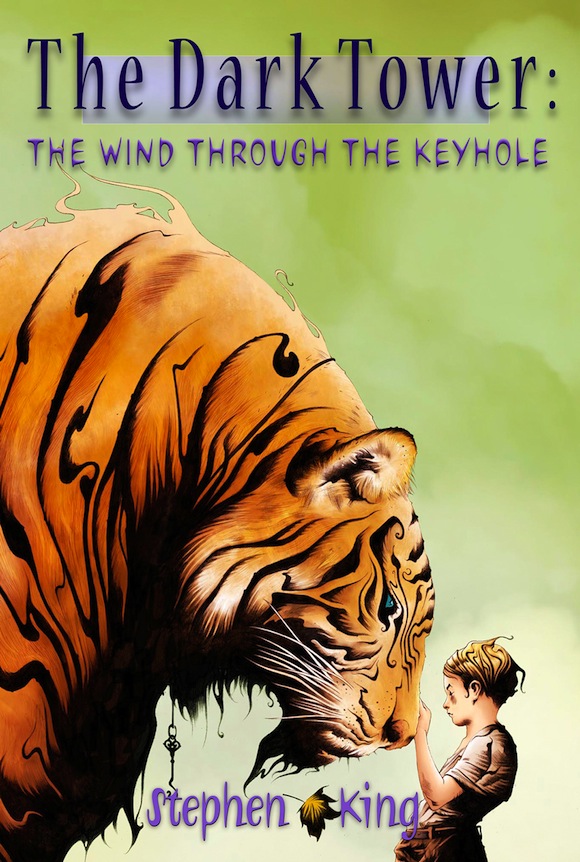 I ordered the Grant Books limited Artist Edition of The Wind Through The Keyhole for a few reasons… the professional binding and slipcase are great, you get Jae Lee art that won’t be in the trade edition, it’s autographed by Lee and, most importantly, you get it a full two months before Scribner’s trade hardcover. Which is why I have a review ready now even though the book doesn’t come out until April 24th.

I remember the same thing happening with Grant’s Wizard and Glass, which I did order and read, but back then it wasn’t really a race. “I better read it early so I don’t get spoiled!” didn’t enter my mind. It wasn’t until the last few years that I noticed I wasn’t alone in my Dark Tower worship. As a kid, these were the King books people didn’t know or give a shit about, even my grown up friends who read King didn’t give these books much attention.

Now the fanbase has grown to quite an impressive level, with websites dedicated to the series and talkbacks full of educated opinions every time some iteration of a feature film version of The Dark Tower series rears its head and we post a story on it.

Grant Books’ printing is spectacular, with a turtle shell-like hardcover pattern and high quality paper and binding. If you’re a fan I highly recommend getting a jump on your friends by ordering the Limited Grant Edition which will run you $75.00 plus shipping, but for that money you get a quality level you won’t get in the trade edition. And you’ll likely get it pre-release, just like I did.

So the wrapping was nice and all, but what about the story? Did King slip effortlessly back into Mid-World? How does this book fit into the series as a whole? And what the hell is the wind going through that keyhole for? Doesn’t it have anything better to do with its time?

King dedicates the book to Robin Furth and the team from Marvel, who have been working on adapting Wizard and Glass and have been telling some previously unknown stories of Young Roland after the tragedy at Mejis. Right off the bat that should tell you where this book fits.

It’s like King was coming up with ideas for Marvel’s books and then was hit with this one and just couldn’t give it over to the comic guys.

The book starts with Roland, Jake, Susannah, Eddie and Oy on the road to Calla Bryn Sturges after the events of Wizard and Glass and I gotta tell you it was pretty emotional to slide back in with the group. I missed those guys and it was clear that King missed them too because their voices rang true. Eddie was his usual big hearted, smart-ass self, Jake and Oy the best “boy and his dog” pairing ever and the little glimpses of Odetta peeking through Susannah’s more controlled personality had me clutching my sizable gut with laughter once again.

It was like a family reunion in a weird way and if I had any complaint about the book it’s that we don’t get another adventure with these guys. I just miss them and miss the energy of King’s writing when he’s working with them.

When the ka-tet gets trapped by a hellacious storm, Roland gathers them around and tells them another story of his youth. Narratively, this is an odd book because it’s basically a guy telling a story about a younger version of himself telling a story. The Wind Through The Keyhole is a Gilead fairy tale that, of course, crosses over into the main story in The Dark Tower series.

Young Roland is sent to investigate the violent murders in the countryside. His father believes it to be the work of a “skin man,” or shape-shifter as we’d call it. So, Roland and his buddy Jamie de Curry take off to investigate as Roland is in an emotionally delicate place after the events of Wizard and Glass. 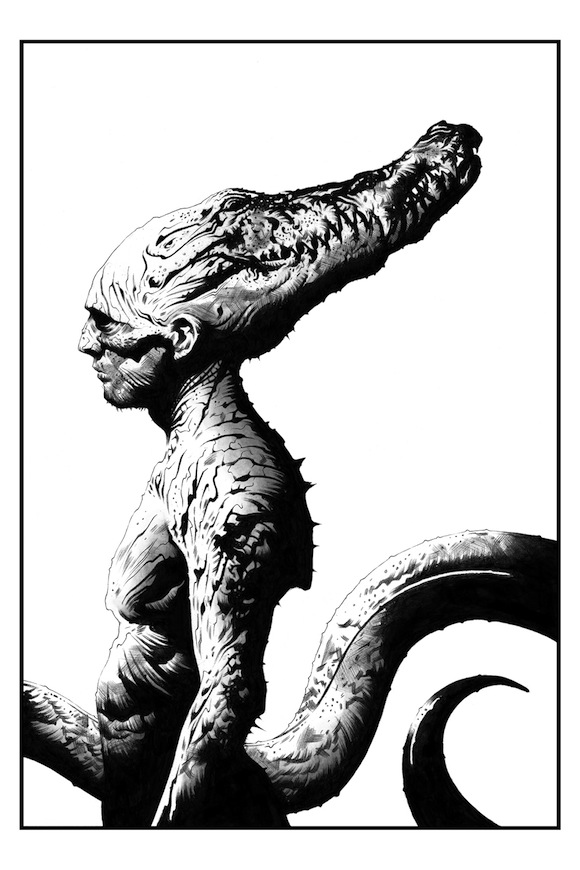 The only witness that could solve the mystery of the identity of this shape-shifter is a scared young boy that resembles young Jake in personality and description, so this protective relationship seems to foreshadow Roland and Jake’s in the books. Ka is a wheel, right?

In order to calm this boy down, Young Roland tells him this fairy tale and I’d say it comprises at least 75% of the book. The thing about this fairy tale, though, is it isn’t just us reading this old timey text… this is Roland telling the story, so he tells it from his point of view, adding in little flourishes that could very well have been influenced by his adventure so far.

The Man In Black figures into the story, about a small child whose father is killed and he’s put on the path through a deep dark forest in order to save his mother. There are dragons, enchantments, mutants, magic and all types of Mid-World iconography sprinkled throughout.

The Wind Through The Keyhole feels a lot like The Eyes of the Dragon, King’s pure fantasy book with a lot of tangential Dark Tower connections, and it’s a great note to strike. King is really good at fantasy and doesn’t play in this universe a lot. While I would have loved to have a book that enlightened me a bit more about Roland as a character or given us another adventure with the ka-tet at their peak, I gotta say I was quite happy with this book. 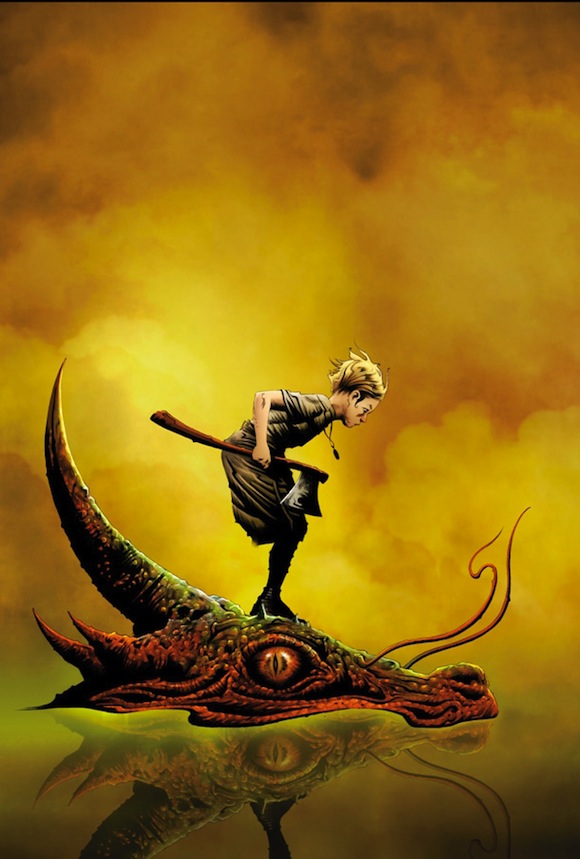 There’s an ease here that I haven’t felt from King since The Wolves of the Calla. I’ve liked many of his novels since, including his more recent 11/22/63, but this one just feels like he’s in his element, even more so than the last two Dark Tower books, which had some amazing things in them, but also felt a bit cluttered and jumbled. This is a quick story that touches on many of the elements that made me fall in love with King’s Dark Tower series to begin with.

You have the close-knit family relationship with Roland, Susannah, Jake, Eddie and Oy, the horror story of Young Roland hunting down a shape-shifter that’s tearing a small community apart (literally) and the Grimm’s fairy tale of little Tim Stoutheart who ventures into the dangerous Ironwoods at the prodding of a familiar man in black with nothing but his dead father’s hand-ax, a lantern and a child’s determination to save his mother to see him through.

The Wind Through The Keyhole section is the most fleshed out and the most complete, with a solid pace and nice payoffs. The Skin Man section feels a little more rushed. King doesn’t milk the mystery of the set-up as much as I was hoping he would. This could have been a great The Beast Must Die style reveal, but instead it feels like the conclusion happens too quickly and with little consequence. Adult Roland and his ka-tet really only serve as the book ends, but even our little time back with the group was enough to make me happy.

Jae Lee’s art is beautiful and further strengthens my theory that this was almost a King-dictated story for the Marvel books that he decided to just write himself in novel form (since Lee does the art for the Dark Tower comics, ya’ ken?). His black and white work, in particular, is striking. However, his color stuff… I don’t know, it looks overly cartoonish to me. As much as I like Lee’s work overall and dig the comics, he’s never captured the Mid-World I imagine when reading.

I’m a fan of the Dark Tower art by Michael Whelan, Phil Hale, Ned Dameron and Bernie Wrightson. That, to me, is the world of The Dark Tower. Rough, but beautiful.

I felt content when I turned the last page of the book and had a strong compunction to pick up Wolves of the Calla and follow my ka-tet on their adventure. I’d love it if King would continue to fill in gaps of time in this story or tell parallel stories whenever the mood strikes him. Like I said above, he just feels at home in Mid-World. Damn near everything he has done and continues to do ties into this world in some small or large way, but there’s nothing like a true-blue Dark Tower King story. I didn’t realize how much I missed them until I was about 2 pages into The Wind Through the Keyhole. 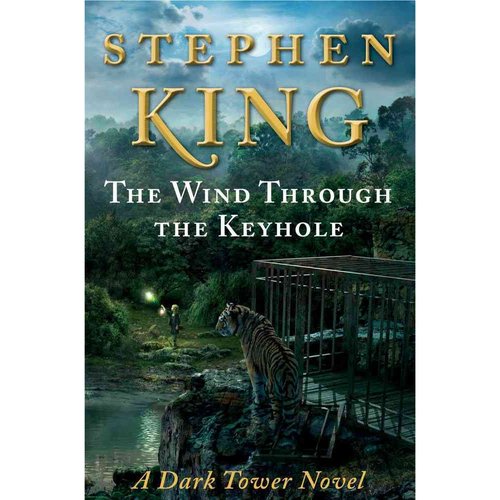 Scribner’s hardcover trade edition hits April 24th and will run you about $16, but if you’re impatient and have a little extra dough to drop the Grant Books Limited Edition is a solid option. Those are shipping now.