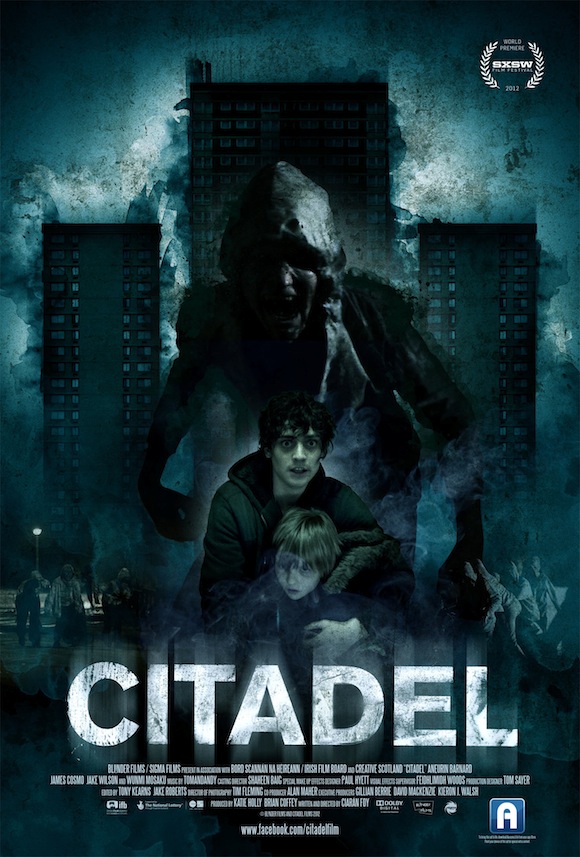 Ahoy, squirts! Quint here. One of the better midnights to play SXSW this year is this little Irish creeper called Citadel. We debuted the poster and trailer just before the fest and from that limited exposure I noticed a heavy “creepy children in hoodies” motif that worked so well for The Brood and Jacob’s Ladder.

Let it be said that the advertising for the film is indeed accurate and there are copious amounts of creepy mutated kids in hoodies who torment this poor bastard from beginning to end.

Citadel’s making of story is really interesting and, in many ways, makes the film itself even better. Writer/Director Ciaran Foy was violently attacked and subsequently suffered with an extreme case of agoraphobia and you can tell that this film is part of his own therapy. There’s a sense that he’s exorcising a ton of personal demons with this story of a new father whose world is thrown into chaos just prior to the birth of his daughter.

Much like the director, this young man, played with a tired-eyed intensity by Aneurin Barnard, is exposed to a seemingly random act of violence, which scars him. Pair that fear of the outside with his obvious fear of becoming a father (and a protector) and you get one mixed up dude.

The tone of the film is a rock solid slow burn creep-out style built by tense set-ups, eerie sound design, a haunted leading performance and a deteriorating urban landscape that evokes a plague epidemic movie feel.

While I won’t go into any radical spoilers I will say that they don’t cop out with this premise. These little hoodied fuckers aren’t projections by a fractured psyche, but real life horror shows that would be at home in early Cronenberg or Argento films.

When horror films toy with mental illness in their leads I get nervous because it’s rare when a movie that takes the psychological “that wasn’t real” option and is a better film for it. I’m a fan of the supernatural and I don’t like being told that anything I’ve invested in a movie was an investment in a lie, so to speak.

Citadel doesn’t do that, thank the movie Gods, so the slow burn actually builds to a decent pay-off that doesn’t make me feel cheated as an audience member.

Barnard needs some credit as a fairly low-key protagonist that has to get his arc across subtly through the course of his story. He somehow makes some of his more frustrating decisions reasonable to me because he really sells the agoraphobia. It’s a very good, understated performance.

What’s not so low key is James Cosmo, who is awesome as the pissed off priest with a plan. It’s a role that Brian Cox would have played and played well in a US version of this movie, but damn Cosmo’s good in this. And he has a blind boy sidekick, which turns out is exactly what you need to fight mutated reflective-eyed evil children in hoodies.

It’s a solid movie, which has a lot on its mind and becomes even more interesting when you find out the origins of the story. It also happens to be one of the most consistently liked films of SXSW (this side of Cabin in the Woods, of course). This one will find release, no doubt in my mind.