Mr. Beaks Takes Issue With The Coverage Of JOHN CARTER! 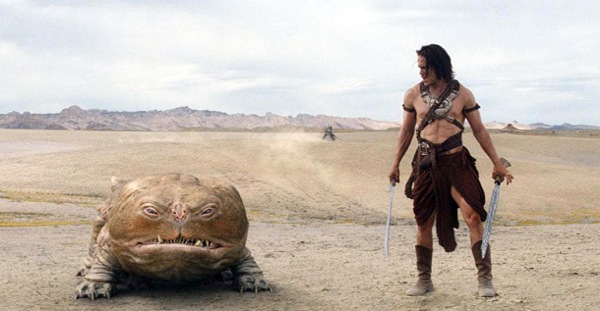 "You could see Disney's JOHN CARTER shaping up as a misfire from a long way off. No studio has projected 'disaster' so loudly since Sony's misbegotten remake of GODZILLA in 1998. For a $250 million movie to be tracking near a $25 million opening is shocking."

The autopsy began before the corpse was even on the slab. In fact, with less than one week in the books and over $100 million in worldwide grosses, it's yet to be determined whether JOHN CARTER is actually dead. But that didn't stop reasonable folks like Anne Thompson, quoted above, from declaring the movie DOA before ticket buyers had their say. Here it was: another stumble for Disney's feature division (following the failed franchising of TRON LEGACY) and, perhaps most importantly, the first critical/commercial disaster for a key member of the Pixar brain trust. Finally, a chance to lambaste one of those guys.

Andrew Stanton called this pack-mentality drubbing "schadenfreude" on Twitter, and he's correct up to a point. Success breeds contempt in Hollywood; the longer you're on a roll, the more folks want to see you drive into a ditch going 100 mph with no seat belt. They want to know that you're human, and they want you to suffer for their inability to make a film 1/10th as inspired as the fiasco they're tearing apart*. Stanton was already on the clock after the largely-dialogue-free WALL-E; now that he was branching out into live action (and admittedly learning on the job) with a semi-obscure property that's long thrown a scare into studio marketing departments, the opportunity to yank the leash was there.

At a reported cost of $250 million (which does not factor in Disney's aggressive marketing campaign, which would certainly knock the price tag over $300 million), it seems unlikely that Stanton's JOHN CARTER will rake in the $600 million required to justify a second installment. Obviously, it's worth keeping an eye on the international gross, which is poised to more than double the film's domestic take, but with the market soon to be flooded with other blockbuster product (namely THE HUNGER GAMES), screens will be at a premium; by the time WRATH OF THE TITANS steals most of the 3D houses on March 30th (THE LORAX stands a better chance of holding onto a sliver of its 3D screens due to an absence of legitimate family film competition), JOHN CARTER will be finished in the U.S. with a best-case projected gross of $90 million.

I didn't see JOHN CARTER until the Wednesday before opening at an AICN-hosted screening in Los Angeles (held in conjunction with Disney, who paid for me to visit the set of FRIGHT NIGHT, which I reviewed thusly). By this time, the stink was on the film; most critics were reviewing the budget as much as the movie, and comparing the four-armed Tharks to Jar Jar Binks. While I go into every film hoping to fall in love, I couldn't help but feel a sense of dread - especially after one of my most trusted colleagues told me the night before that he absolutely hated the movie (I'd also chronicled the bungled D23 panel). But from Stanton's odd decision to open the movie by thrusting us, sans exposition, into a battle between two factions of indeterminate origin (unless you're acquainted with Burroughs's universe), I was giddy. It'd been since Michael Mann's brilliant theatrical cut of MIAMI VICE that a massive studio film had caught me by surprise like this. Granted, the sudden shift to the 19th Century and subsequent establishment of John Carter's backstory felt all the more deliberate in comparison, but I enjoy misshapen narratives when I know I'm in the hands of an expert storyteller. And the mess of JOHN CARTER is a byproduct of cramming in story from future books to give the film a bit more heft.

But Stanton gets away with it because he's a born filmmaker, a world builder who knows how to pack a widescreen frame. Though I take issue with his sere vision of Barsoom (a drab-and-dusty, HEAVEN'S GATE-ish** comedown from the brightly-colored worlds of FINDING NEMO and WALL-E), the canny combination of location photography and CG-sculpted civilizations pays lush, jaw-dropping dividends. I never once felt like I was watching a soundstage-bound, green-screen-enveloped faux-spectacle. I was on Barsoom. It was just a little uglier than I imagined when I read Burroughs's books (and the Marv Wolfman/Gil Kane comics) as a kid.

JOHN CARTER has myriad issues, but it is transporting and cinematic and the kind of go-for-broke epic that's likely to inspire some eight-year-old dreamer to pick up a camera. It just bums me out that, at some point, that kid is going to run up against the vision-limiting tyranny of studio executives - who'd rather blow a fortune on carefully-calibrated product that will open big and please no one. And this is the problem with savaging a film like JOHN CARTER: yes, it's ungainly and clearly flawed in ways that no Andrew Stanton film has been before, but it's at least the work of a visionary who loves pulp entertainment. It's not a by-committee cash-grab like PIRATES OF THE CARIBBEAN: ON STRANGER TIDES.

That Jerry Bruckheimer and Rob Marshall can get away with phoning in a $300 million piece of shit while Stanton gets killed for taking a well-earned risk underscores everything that's wrong with this industry - and, in particular, the way in which it's covered by entertainment journalists. Consider Brooks Barnes's poorly researched postmortem, which leads by perpetuating the myth that ISHTAR tanked due to its stars' run-amok egos (in actuality, the damage was done by then Columbia head David Puttnam, who disparaged the film in a pre-release interview - not available online, but quoted here - with the L.A. Times' Roderick Mann): JOHN CARTER may have been a questionable greenlight on a marketing level, but Stanton's track record was unimpeachable. And it's not like he was rushing into production with rank amateurs; his DP, Dan Mindel, is exactly the kind of cameraman you'd want advising you on your first live-action film. Stanton and company were proceeding in good faith, but they failed to make a four-quadrant connection with audiences.

JOHN CARTER is not a debacle; it's an earnest attempt to evoke wonder, and it largely succeeds despite its narrative missteps. Maybe you don't agree. That's fine. But choose your fucking battles, people. Having it out for a film like JOHN CARTER hurts the art form; it makes it harder for our best directors to follow through on their dreams. For a long time, BLADE RUNNER was considered a horrendous flop; now, it's one of the most influential films of my lifetime. No one at Fox was proud of THE ABYSS, but I'm pretty sure at some point it'll be considered Cameron's masterpiece. In any event, register your disappointment and move on, and save your vitriol for the films that deserve it.

*I've long believed "good" films tend to win Best Picture because most Academy members want to think they're capable of producing an Oscar winner; the minute you start rewarding the truly exceptional is the day their dream dies.