SHOWEST - Moriarty on the mescaline free half of the first day!

Hey kemosabe and ranger bills, Harry here with Moriarty's first half of the day. We came back to the laughing clown to start our 'trip' before the indies kick in this evening. Hehehehe... fun.... 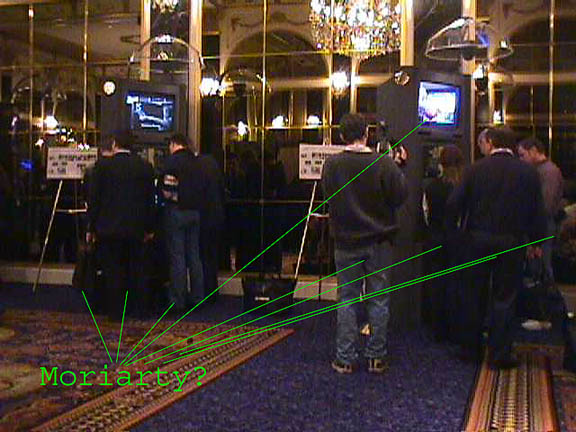 It's just after noon on Monday, and Harry and I are officially checked in to ShoWest 2000. Since our first scheduled events aren't until tonight, I thought we could take this time to walk you through what it's like to get set up for an event like this. We've also got some great new images from various showcased films like THE PATRIOT, SHAFT, ME MYSELF AND IRENE and CHICKEN RUN to share.

When the alarm went off at 7:45 this morning, my first inclination was to throw the damn thing out the window. I do most of my work late at night, between midnight and sunrise, and I leave it to the henchmen to handle business during daylight hours. Not here, though. Not this week. Somehow, Knowles was already up. He said he'd watched the sun rise over the mountains and the pyramids and the rollercoasters. I must admit, the sight from our hotel room window is extremely surreal.

After I cleaned up and affixed my Amiable Reporter Guy Disguise (patent pending), we headed downstairs. As we walked through the casino area of our hotel, we passed a row of slot machines that had been sealed off with yellow police tape. Behind it, police photographers were busy snapping shots of everything while other cops were dusting for prints. Ahhh... Vegas.

A quick hop, skip, and jump -- and trust me, folks, you haven't lived till you've seen Harry do all three -- and we found ourselves at the new Bally's Paris. I don't know what experience you guys have with Vegas, but it seems like every year they raise the bar for just how extravagant and insane these hotels can be. The Paris is beautiful, like an EPCOT exhibit on steroids. We wandered around for a while soaking it all in before finding the convention area. Once we got there, we went to the Press Room to check in.

Let me take this quiet moment to thank all the great people on staff at NATO. This sort of giant event has every opportunity to become an unmitigated clusterfuck. Instead, all we see is grace and clockwork and smiles. Jim Kozak, press director for the organization, already looks asleep on his feet, but he keeps finding that extra reserve of energy and exceeding any expectations we could have of him. They gave us our press packages, thick folders holding tickets to the various luncheons and dinners throughout the week, then told us where to take our coupons to pick up our first swag bag of the week.

Yes, it's true. The studios and the candy companies and the various exhibitors are all merciless about the swag they foist on you at this show. I've already added the groovy DINOSAUR/GONE IN 60 SECONDS and the Paramount logo keychains to my keys. I dig the U-571 shirt they gave us. The NURSE BETTY hypodermic needle pen is good for giggles. And what does all this do to my opinion of these movies?

Well... nothing, actually. Swag is fun, but it's ultimately meaningless. It's just fun stuff to remind you a film is coming. In the end, the movies have to live or die based on the experience I have when I'm sitting in that dark room, hoping and praying each time for something special. I know I have hopes for all three movies I'm seeing this week. Harry and I took our swag bags to the row of ETM machines that were set up, where we each had to swipe our press badges to pick up our tickets for the Miramax product reel presentation, Fox's screening of WHERE THE HEART IS, the Texas Instruments Digital Cinema demonstration, and two indie films each at tonight's showcase. We're both seeing GOAT ON FIRE & SMILING FISH, and then he's seeing Penelope Cruz in WOMAN ON TOP while I check out Paul Newman and Linda Fiorentino in WHERE THE MONEY IS.

We dragged the crazy-heavy shoulder bags over to the Paris' buffet, where we carbo-loaded for the day as we sorted through things. That's when we found the images you'll see below, and that's also when we learned for sure that New Line is showing LORD OF THE RINGS footage tomorrow. Once Harry convinced me to stop running laps around the restaurant screaming "FUCK YEAH!!!" at the top of my lungs, we made our way back here, narrowly avoiding arrest, I suspect. So I scared the tourists. Sue me. We'll spend the afternoon reading and being low-key so that we'll be ready to bring you more news later tonight. Until then...