Hello ladies and gentlemen, it’s your pal Muldoon! I'm still getting all sorts of kickass suggestions and while a number of you fine folks have suggested I try MAC AND ME, I did want to point out that supermodel Aziz Ansari already tackled that flick on AICN here. (I'm still on the fence about HOWARD THE DUCK) Well back to today's feast of WTF... I don’t rap and I’m not a genie, but I’m here with a cinematic gem of a movie chock full of both. Not to mention large servings of WTF after WTF after WTF. I present to you a film straight out of 1996 that stars a basketball superstar in a kid’s movie… no, not SPACE JAM but KAZAAM of course!

“…if you got the itches for a sack of riches, don't matter how avaricious, I'm the man that can grant your wishes! Man of the ages, straight out of the pages. I'm contagious, outrageous, spontaneous! You can't contain this. I am KAZAAM!” 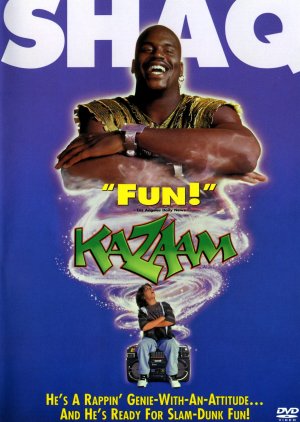 (Contrary to the poster, the film is not titled SHAQ.)

The film follows a young boy named Max (A BRONX TALE’s Francis Capra) as the classic, whiny “movie kid” you’ve seen in a million kids movies, the one that gives his mom a lot of shit for making poor life decisions and having an absentee dad. Things Spielberg’s touched upon time and time again, yet without magical rapping basketball stars. Anyway so this poor kid with a frustrated home life, is like a bully magnet as well, and one day while dodging this gang of youngsters in a THRILLING chase he accidentally bumps into an old boom box (naturally) and releases an “edgy”, wise-cracking genie (Shaquille O’Neal of STEEL fame) named Kazaam. BAM!

What happens the rest of the film is the stuff of legend. An epic rap infused saga of all out genie zaniness – Sure we’re all familiar with how “traditional” genies work (rub a lamp, get three wishes), but Kazaam is in a league of his own. It’s definitely a unique, extreme take that features a genie with sickeningly mad rap skills. Care for a taste?

Treat yourself to this:

Yep, wish granted yet? And there’s more where that came from, I’m talking 93 minutes of WTF gold. I might be going out on a limb here, but something tells me PolyGram and Touchstone were just trying to cash in on Shaq Attack’s popularity and gave director Paul M. Glaser (Yep, Det. Dave Starsky himself) a check for $20,000,000.

So what else does the film offer?

- Shaq gliding around on a flying golden bicycle of greatness

- Junk food falling from the sky

- Shaq inconsistently rapping when he talks, so you never know if his next line is going to be a poetic piece of awesome or delivered like a boring cheese pizza

- The genie sleeps in the kid’s bed

Interesting observation I had while watching… I’d argue that Kazaam uses rap as an almost “secret genie weapon”. It sets him free in the end and he uses it against his oppressive wish masters. And I’m guessing the hip old men that green lit this had recently watched Robin Williams manic singing and dancing genie in ALADDIN and decided to do him one better… Success!? You decide! It’s on Netflix Instant now so if you’re interested, give it a rub. And who says there’s no second chances for this Shaq starrer…

As always, feel free to shoot me any ideas you might have for a future WTF Hollywood column (just put “WTF” in the subject line somewhere) or if you were at all a part of the production on this film and feel like chatting – I’d love the opportunity to talk with you!