Quint says Indie Game: The Movie is a must watch, whether you're a gamer or just like good documentaries! Sundance 2012!

Ahoy, squirts! Quint here with the last of my full reviews from my time at Sundance 2012. I have about 5 more titles that I’ll hit in a wrap-up piece, but since I have a few things to say about this really fun doc that’s pretty much made for the AICN readership this’ll be a full review.

Indie Game: The Movie gives us a behind the scenes look the tiny, passionate teams of imaginative programmers and level designers who spend years and thousands of dollars slaving away towards realizing lifelong dreams of sharing their creative vision. 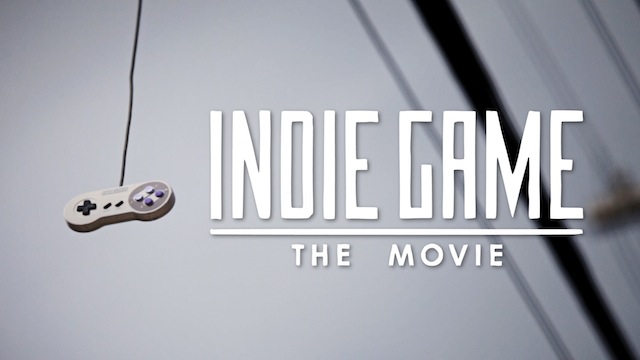 The documentary follows two different game developers building games for the X-Box Live Arcade. One is called Super Meat Boy, the other is called Fez.

Now these aren’t the thousands strong teams that bring us games like Call of Duty or Fallout 3, these are young dudes who have a passion for gaming and want to contribute to the artform they love. Both teams consist of 2-3 people doing all the coding, designing, business end stuff, organizing, beta testing and distributing of their work.

It’s a fascinating era for gamers. We have these tentpole games that are, frankly, incredible. Bioshock, Modern Warfare, Skyrim, Uncharted, Mass Effect, God of War, Arkham Asylum and City… enormous spectacle and jaw-dropping art direction on display here in these immersive stories. But like the studio system there’s a lot of rip-off fluff. That’s why I have Gamefly. I tend to buy the games I love, but there’s a ton of shit to wade through.

Much like independent film, indie games are smaller in scope, but have the freedom to break out of the traditional tentpole formula and can be crazier, filthier, artier and more inventive in their gameplay.

Now, I don’t know a whole lot about the world of indie gaming. The only indie game I’ve played that was mentioned in the doc was Castle Crashers. I’ve logged a lot of hours on my X-Box, but I’m by no means a gaming expert, so it was particularly fascinating to watch the behind the scenes of building one of these cool quirky games from the ground up.

The two storylines are radically different, but oddly running on parallel paths. The Super Meat Boy guys (Edmund McMillen and Tommy Refenes) are the upstarts, bright-eyed young men bound and determined to wow the world with their concept, a game about a square boy without his skin navigating a world filled with spinning saws and salt trying to get to his girlfriend, who happens to be made out of bandages. She was kidnapped by an angry fetus in a jar, by the way. As you do. 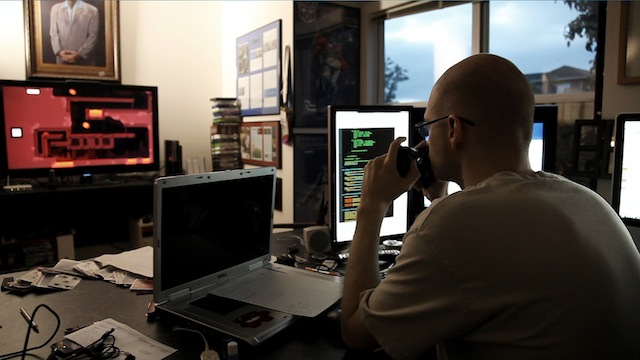 The makers of Fez are more the rock stars who made a big splash at a gaming con when they announced the game, about a 2-D character that suddenly realized he lives in a 3-D world thanks to a magic fez hat. They won awards, garnered huge praise from the gaming press and then disappeared. It’s been years, a lot of drama has happened, the business has fractured and the lead artist Phil Fish is such a perfectionist he’s rebuilt the game from the ground up three times.

Fish is rushing to get his business affairs straight and get Fez ready for PAX (Penny Arcade’s Expo, which has turned into Comic-Con for gaming) and The Super Meat Boy guys have an XBLA launch date that they aren’t sure they can make. Filmmakers Lisanne Pajot and James Swirsky go back and forth between the two storylines as the pressure builds and builds, letting us see the toll that takes on the game developers.

They also give us a brief history of indie gaming, underlining the huge boom thanks to X-Box Live Arcade, tablets and smart phones and introduce us to other players in the indie game business, including Jonathan Blow who made a game called Braid.

While Blow is a fascinating personality, very opinionated to the point of isolating himself from the broader community, and Braid looked incredible I think the one big flaw of the doc is how prevalent he is in the story. He’s not involved at all in either Fez or Super Meat Boy and doesn’t impact those storylines at all and I think we spend a bit too much time with him that should have been spent with the main focus of the doc.

It’d be like if King of Kong spent 20 minutes on the ref instead of Steve Wiebe and Billy Mitchell. The drama comes from the two parallel stories and once you give some detail to the world of indie gaming it doesn’t make any sense to keep focusing on another, smaller character.

The rest of the doc is exemplary, though. You get just enough of the private lives of all these different personalities, you get a great feeling for their passion and the trials of realizing your dream. In a way, this doc could have been about indie filmmakers or rock groups. It’s a universal story: young guys working hard to share their artistic vision. Will there be an audience for it? Will anybody care? Will years of work all culminate in a fart sound when they finally get to share their passion? Or will their work lead to a bigger and better life where they can pursue their dreams without fear of making rent every month?

Like real life there’s not always a happy turnout and one of the two stories is still left wide open by the end. There are victories, defeats, tears and smiles.

Indie Game: The Movie is a must-see doc for anybody that fancies themselves a gamer or for anyone who gets sucked into a good underdog story.