Hello ladies and gentlemen, Muldoon here with the grand opening of AICN SHORTS, your own personal film festival every Saturday here at AICN. For your viewing pleasure I’ve gathered what I consider to be some damn good shorts created by you, the badass readers of AICN. Below you’ll find a nice serving of jam-packed shorts awesomeness. This week we’ve got everything from big budget high concept off the wall sci-fi badassity to well… zero budget high concept badass comedies. We’ve also got the World Premiere of SQUID, a short that visually blew me away.

If by chance you submitted a short to me and don’t see it below, fear not, I very well might have it planned to hit the magical screen AICN SHORTS next week. OR if you have a short that you think the fine readers of AICN should check out, here’s how to submit:

Then, in the body of the email, please include a synopsis of the film and any contact information you might think I need [EX: the film’s website or a funny story involved with getting the film made…] (You can find my original call for shorts here)

Please don’t feel the need to submit multiple times.  I swear to each of you I truly check every email I get, and sending the same short a few times just makes it a bit messier.

That’s enough of the business end, so who’s ready to watch some kickass stuff? Grab some popcorn, silence your cell phones, and please remember the creators of the shorts just might be in the row in front of or behind you, so after the screening remember to keep your manners about you. If you perhaps didn’t care for a short, that’s okay, it’s your opinion and you can absolutely express that.  However, being a jerk about something really isn’t cool and doesn’t have a place here. So ladies and gentlemen, please take your seats so we can begin the program.

First up is MELTDOWN, the film that got me thinking about this column in the first place. 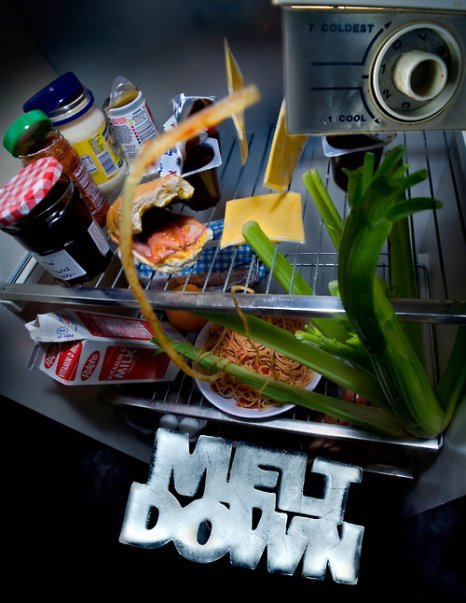 MELTDOWN from Dave Green on Vimeo.

Here we have MELTDOWN, the film that got me thinking “This is badass. Why haven’t I seen this before? I must have more.” I actually had the opportunity to interview Dave Green and screenwriter Henry Gayden about their web series (ZOMBIE ROADKILL) at Fantastic Fest way back when. I recently checked out Dave’s Vimeo account when he shot me the link to MELTDOWN. The guy’s got a slew of kickass stuff that you should watch. In fact, you might have already seen a music video he did for Miles Fisher called “New Romance.” The video tied into FINAL DESTINATION 5 with a parody of SAVED BY THE BELL and is definitely worth checking out along with his other stuff.

MELTDOWN brilliantly showcases how inventive people can get and how engaging even the silliest things can be when in the right hands. I literally spent six minutes of my life watching talking food in a refrigerator and was engaged the entire time, that says something. Green’s command of the camera and cutting style feels like old-school Sam Raimi. I hope he keeps it up.

Check out photos and behind the scenes stuff here:

Next up, we have The World Premiere of SQUID. I feel incredibly lucky that the filmmakers, Robert Olsson and Chris Ingersoll, chose AICN to unveil their kickass giant monster movie here. It’s a real treat.

"SQUID is an action packed short, following one man trying desperately to survive a devastating invasion by horrific creatures, emerging from the sea. What are these "squid" and why have they attacked human civilization? Is mankind finally doomed?”

According to director Robert Olsson, SQUID “was shot on a shoe-string budget with the help of many talented volunteers. Almost every shot in the film contains some form of visual effect, including dozens of high res matte paintings, and fully articulated, computer generated creatures. The filmmakers have an extensive background in the vfx industry and wanted to put together a film that's not only interesting to watch, but exciting to experience!”

Well guys, I think you more than succeeded.  SQUID kicks all kinds of ass in my book. My only regret is that it ended. Seriously, I’d love to see some sort of prequel or sequel around this. I, for one, can’t wait to see what else these guys come out with next!

While we’re on the subject of sea creatures toying around with people, our next film is JELLYFISH GIRL, an animated short from director Mike Caracappa that has a beautifully twisted story that… well I don’t want to give anything away, but “Wow.”

“JELLYFISH GIRL is about a boy who goes swimming in the ocean with his underwater camera where he discovers a girl/jellyfish hybrid creature and tries to get a picture of it.”


According to Caracappa, the film was made in his second year of college at California Institute of the Arts and took about 8 months to create. As a tasty little nugget of geek cool - the sound design was done by Caracappa’s friend Crispin Freeman, who is a well-known anime/American voice actor (the voice of “Alucard” in HELLSING, Zelgadis in SLAYERS, and Togusa in the GHOST IN THE SHELL TV series).

I love this short. I love how beautifully Pixar-esque it is at first, and how I felt like I was on a nostalgic trip to the Disney beach. The music and overall look scream joy up until the end, which, my god – talk about a tonal shift. I’m shocked Caracappa went with that ending but love how he executed it. What an incredibly disturbing ending to such a playfully whimsical beginning.

He’s got another short called BEAR TRAP that he didn’t submit, but clicking around his YouTube account I stumbled on and think it’s worth checking out. Keep them coming, Mike!

That last film ended on a badass but still bummer of an ending, and it looks like director Patrick O'Leary is here to pep us back up with TIME TRAVEL, an incredibly super short yet enjoyable film that I definitely got a kick out of.

“A young man thinks about buying a time machine.”

There’s not really too much I can say about TIME TRAVEL other than Patrick O'Leary, Todd O'Leary, and Nicole Holovinsky did a hilarious job with such a simple concept. The short did remind me of a story WIRED did where they challenged celebrities to make six word stories, much like Hemingway’s “For sale: baby shoes, never worn.” Alan Moore responded with “Machine. Unexpectedly, I’d invented a time,” and this short absolutely reminds me of that, like “What the hell happened when he went back?” and clearly he did go back at some point…

Here’s another great comedy, this time straight from down under from director Mathew Jenkin called FAMILY VALUES. 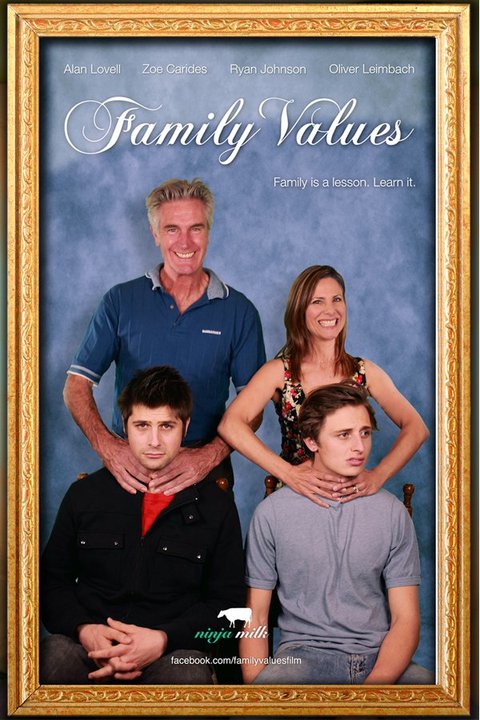 “One family. One lesson to be learned. One twisted way to teach it.”

Be sure to check out the film’s Facebook page: 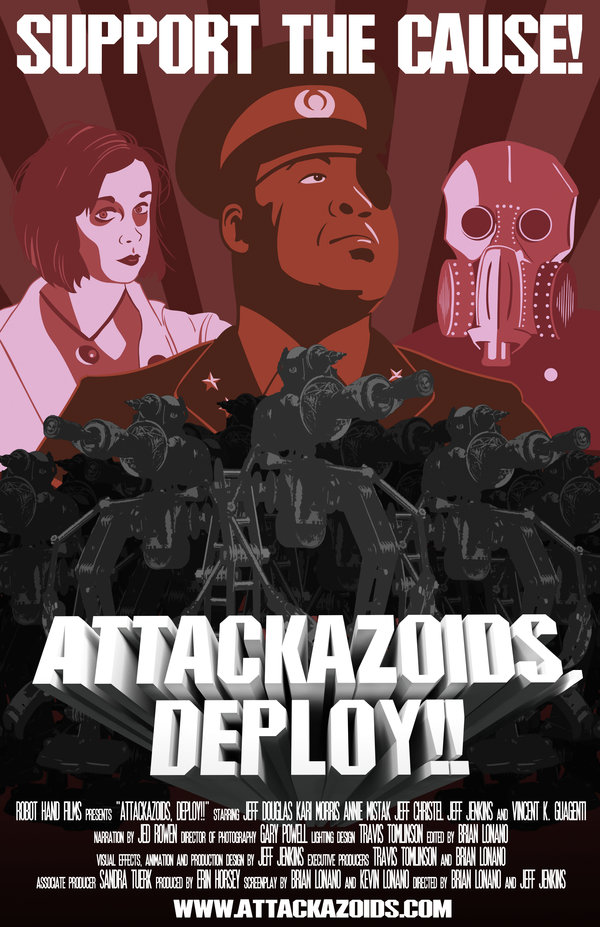 “War is declared on the off world settlement. Everyone from suburban homemakers to super scientists are uniting to deploy an army of the giant killer robot Attackazoids.”

Who doesn’t love old timey newsreels discussing killer robots? The production design that went into the film kicks immense ass, and the stop motion animation and composite work blend together beautifully. I found the short incredibly enjoyable and want to see a feature version!

Here we come to our last short of the evening with REIGN OF DEATH from Matthew Savage. 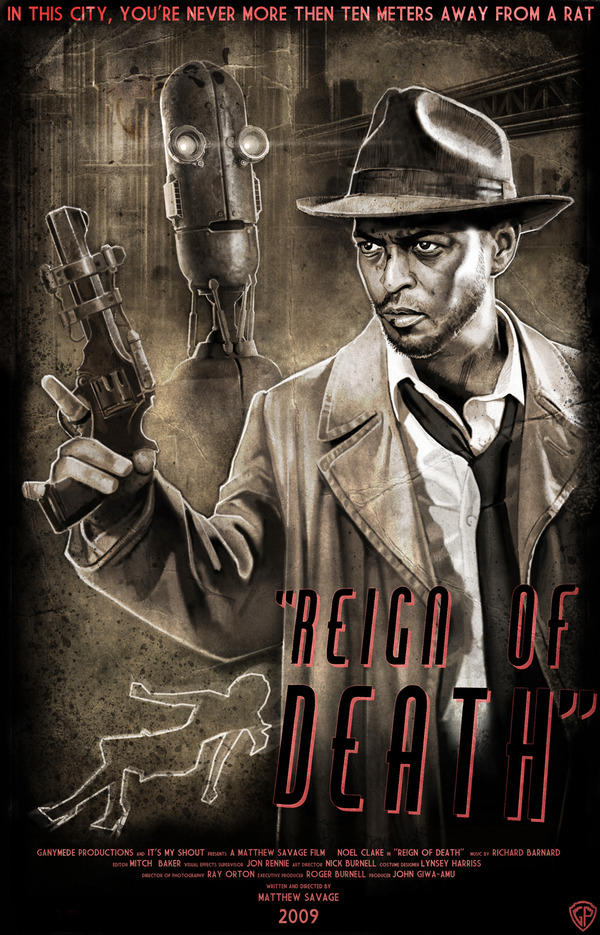 “REIGN OF DEATH is a sci-fi film noir starring Noel Clarke (Star Trek II, Doctor Who) and is a micro murder mystery set in a diesel punk future.”

Savage’s design background absolutely is showcased in this kickass noir short. What a gorgeously designed look of a film, like SIN CITY meets I, ROBOT. Hell, it could even work as a PSA for why not to urinate on things…

Check out the film’s Facebook page for a VisFX breakdown:

Sorry ladies and gentlemen, but that’s the last show of the day. Come back next week for a slightly less FX heavy day of kickass shorts. Next Saturday, we’ve got some wonderful dramas, thrillers, horror, possibly a doc, more comedy, and some more crazy SciFi, plus a short straight out of the 80’s that will blow your mind!

I’d like to thank everyone who has and is continuing to shoot their shorts at me. As I mentioned above, just because you didn’t see your short today, it could pop up next week or the week after that! Keep them coming!