Updated All Morning! And The 2012 Academy Award Nominees Are... 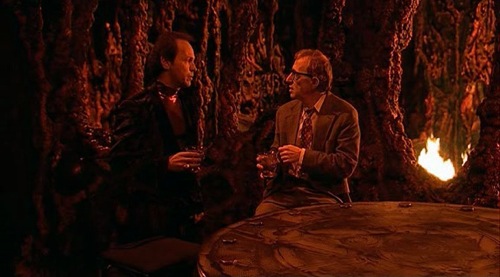 This is it: months of campaigning and millions of dollars are about to determine the pinnacle of artistic achievement in motion pictures for the year 2011. It's Oscar time, y'all! Once again, The Weinstein Company has the thoroughbred to beat (THE ARTIST), while frequent nominees like Martin Scorsese, Meryl Streep and Woody Allen are back for more peer-bestowed plaudits. And then there's Brad Pitt, expected to be nominated in both acting categories (lead for MONEYBALL, supporting for THE TREE OF LIFE). Is this his year, or will he be thwarted by Christopher Plummer and his best buddy in the whole world, George Clooney? We'll soon find out!!!

If you're looking for surprises, the film that might make a stronger showing than expected is TINKER, TAILOR, SOLDIER, SPY (the terrific spy thriller was ignored by the guilds, but has allegedly caught on with AMPAS members over the last few weeks). WAR HORSE could also sneak in for Picture and Director. And a fella can always hope for a surprise Elizabeth Olsen nomination in the Actress race.

I'll be updating throughout the morning with piercing analysis of each category. And now, the nominees (please bear with me if formatting is a little wonky at first)...

THE TREE OF LIFE

THE ARTIST is the clear frontrunner, and will probably win because it is slight and likable. Given its eleven nominations, HUGO would seem to be the only film capable of beating it out, but I think THE HELP could overtake it - though it'll probably split the emotional cripple/imbecile vote with EXTREMELY LOUD & INCREDIBLY CLOSE.

Terrence Malick, THE TREE OF LIFE

No surprises here. David Fincher was thought to be a possibility, but the lack of a Picture nomination in a nine-movie field tells the tale. Hazanavicius is the favorite, but Scorsese is right there with him.

Kudos to Demian Bichir for a well-deserved nomination. He was heartbreaking in Chris Weitz's A BETTER LIFE. Also glad to see Oldman in this group; I'd love to see Pitt and Clooney cancel each other out, and clear the way for an Oldman win.

Rooney Mara, THE GIRL WITH THE DRAGON TATTOO

Michelle Williams, MY WEEK WITH MARILYN

It's presumed Mara took Tilda Swinton's spot, but, in terms of merit (irrelevant when discussing the Oscars), Mara and Swinton should be running neck-and-neck for the win. Close was godawful in the unwatchable ALBERT NOBBS; Streep showboated in the useless THE IRON LADY. David was good, but she's been better in much better movies. Go Rooney.

Kenneth Branagh, MY WEEK WITH MARILYN

Albert Brooks is the obvious snub here, but he also failed to get a SAG nomination, so this isn't a huge surprise. Still disappointing. Not that it matters. Plummer is going to win.

This is Octavia's to lose. Not crazy about her performance, but it's not like anyone else in this group was blindingly brilliant.

I admired HUGO, but Scorsese's visual poetry elevated Logan's pat screenplay. MONEYBALL has grown on me (and I dug the cynicism of THE IDES OF MARCH, which will resonate heading into a presidential election year), but this belongs to TINKER, TAILOR, SOLDIER, SPY. THE DESCENDANTS will win.

Chandor was a surprise, but MARGIN CALL got a huge boost during screener season (shame Fox Searchlight was slow on the draw with the MARGARET screeners; Lonergan should be in this group). It'll be a travesty if anyone other than Farhadi wins, but this is the Oscars, so a travesty it'll be! I think Allen wins for one of his more modest pleasures.

Congrats to the Drafthouse crew for their BULLHEAD nomination! I wish I could pull for it over A SEPARATION, but Farhadi's movie is a once-in-a-lifetime film. This is a goofy category (you have to see all five movies to vote), so I'm prepared for an idiotic upset. Watch out for FOOTNOTE. I won't even begin to ponder the misguided political reasons why this might occur.

A CAT IN PARIS

No CARS 2, no TINTIN, no WINNIE THE POOH... just bizarre. I thought TINTIN would win this. Now that it's not nominated, RANGO is the clear favorite.

No real qualms here. Probably a two-horse race between HUGO and THE ARTIST. If HUGO starts racking up victories early in the Oscar broadcast, it could portend a Best Picture upset.

Jeff Cronenweth, THE GIRL WITH THE DRAGON TATTOO

Emmanuel Lubezki, THE TREE OF LIFE

All worthy nominees. Lubezki would be my choice, but Richardson feels like the favorite. They're both masters, which means they'll probably lose to Schiffman.

A Madonna-directed film has been nominated for an Academy Award! No idea who wins this, but smart money is on Powell.

Kirk Baxter, Angus Wall, THE GIRL WITH THE DRAGON TATTOO

DRIVE wuz robbed. And what the hell is THE DESCENDANTS doing here (it received an ACE nomination, too)? Love Thelma, but, much as I disliked the film, Baxter and Wall did their job brilliantly on DRAGON TATTOO.

Only HARRY POTTER is deserving. May the best wig-maker win.

John Williams, THE ADVENTURES OF TINTIN

Williams will cancel himself out, which means Bource probably eke out a win (though the cue most film-ignorant voters swooned over belongs to Bernard Herrmann).

"Man or Muppet" from THE MUPPETS

"Real in Rio" from RIO

Let this be the death of this useless fucking award (though I hope "Man or Muppet" wins).

THE GIRL WITH THE DRAGON TATTOO

RISE OF THE PLANET OF THE APES

Hugely disappointed that THE TREE OF LIFE was shut out, but at least this isn't a HEREAFTER over SCOTT PILGRIM scenario. All of these films featured excellent f/x work. RISE OF THE PLANET OF THE APES should win, and hopefully the crew will bring Andy Serkis up to the stage with them.

HELL AND BACK AGAIN

IF A TREE FALLS: A STORY OF THE EARTH LIBERATION FRONT

I've only seen three of these films, and my vote would go to PARADISE LOST 3. Bummed Werner Herzog's INTO THE ABYSS didn't even make the shortlist. Ditto Steve James's THE INTERRUPTERS.

THE BARBER OF BIRMINGHAM: FOOT SOLDIER OF THE CIVIL RIGHTS MOVEMENT

GOD IS THE BIGGER ELVIS

THE TSUNAMI AND THE CHERRY BLOSSOM

Want some reactions from the nominees? Well, screw you, you're gettin' 'em anyway!

Here's Wim Wenders, director of the 3D PINA (and one of my all-time favorite films, PARIS, TEXAS):

"It's fantastic to be nominated for Best Documentary for the second time after "Buena Vista Social Club", especially as it is the first time for a 3D film to be given that honor. All the dancers and collaborators of the Tanztheater Wuppertal Pina Bausch, together with the crew and the production company Neue Road Movies, are extremely honored. With our journey into the magical kingdom of the great German choreographer Pina Bausch we wanted to raise a monument to this pioneer of modern dance. The worldwide success of PINA and now this Oscar nomination are fantastic rewards and recognition of our common work."

I am deeply honored to have been nominated by the Academy for my work on Hugo. Every picture is a challenge, and this one - where I was working with 3D, HD and Sacha Baron Cohen for the first time - was no exception. It's a wonderful feeling to know that you've been recognized by the people in your industry. I congratulate my fellow nominees. It's an impressive list, and I'm in excellent company.

It is an incredible honor to be nominated this morning.  We set out to do something different with RANGO, and this distinction is a testament to everyone who tirelessly dedicated themselves to creating our neurotic lizard.  Rango was looking for an audience who shared his love of cinema and I’m humbled that he found one.  It has been a remarkable journey, and one that I am grateful to share with our entire creative team, Paramount, and all of the virtuosos at Industrial, Light and Magic.

“What is happening to the film is galaxies away from what I had initially hoped for. I say this, of course, in a good way. I rejoice in the fact that such an intimate film can find its way alongside Hollywood productions, proof that there is not only one path to artistic and public recognition. I am thrilled and I want to share this moment with all the members of Monsieur Lazhar's team, wherever they are right now. This is also their nomination. I also have a special thought at this moment for my family.”