Ahoy, squirts! Quint here. I was a big, big, big fan of Rubber. You probably remember me making googly-eyes at it from the Fantasia Film Festival and getting excited over every poster and clip for it on the site for months. What can I say? A movie about a killer tire with telekinesis that goes around exploding people’s heads? I mean, c’mon!

So, it was a no brainer that Quentin Dupieux’s follow-up was going to be pretty high on my must-see list this year. And boy it didn’t disappoint. 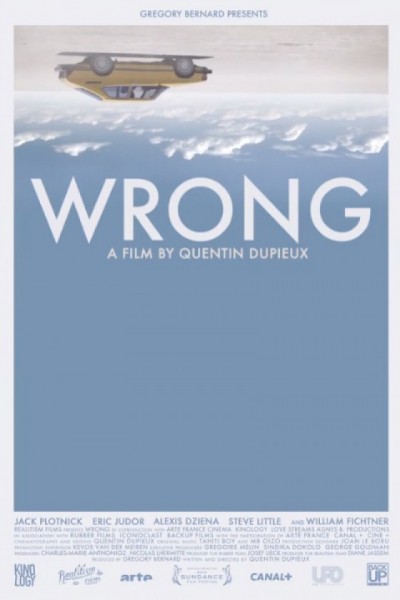 If Rubber is simply about a killer tire with a bunch of weirdness surrounding it then Wrong is simply about a man who loses his dog. There’s so much more to both movies, but I’ll be damned if I could accurately describe Wrong in great detail without taking away from the bizarre experience of sitting down and watching it.

You’ll remember star Jack Plotnick as “The Accountant” from Rubber and he’s the perfect anchor for Dupieux’s batshit insane universe. He’s got that great combination of Woody Allen-like motor-mouth dialogue, a lost look in his eyes like he knows he’s not existing in any reality that makes sense and yet still feels completely in place in that reality.

This is the same “No Reason” universe from Rubber. Why does a palm tree turn into a pine tree overnight? Why is it raining in doors when Plotnick’s Dolph Springer goes to work? Why is there a guy who wanders around painting cars different colors? Why is there a device that can track a turd’s memory (and I swear I’m not making that up)? No reason on the grand scheme of things, but all these little pieces add up to making Dupieux’s own brand of surreal insanity that makes me more and more sure he’s around to continue David Lynch’s legacy.

My threshold for experimental cinema is very thin. Arty farty weirdness for the sake of weirdness doesn’t fly much with me, but Dupieux found the secret to it. He has the surrealism, but goes so weird with it, makes it so much fun that I never get the impression he’s just sitting around smelling his own farts. I don’t sense one ounce of pretension in Dupieux’s movies despite how showy and bizarre they get.

There’s so much weirdness going on in this movie, like a mistaken identity subplot as Alexis Dziena as a phone operator at an upstart pizza place falls in love with Dolph after he calls complaining about the pizza place’s logo and thinks Dolph’s French gardener is him, but the real stand-out here is William Fichtner.

Although I could have just pre-written that into this review before I left Austin because William Fichtner is always going to be the stand-out in everything he’s in, but here he’s especially awesome. He plays a disfigured mystery man named Master Chang who for some reason speaks with a thick German or Austrian accent.

The movie’s super fun. If you loved Rubber then you’ll want to see this one. Check out the trailer. It’s a pretty great indication of the kind of movie you’re in for: