Ahoy, squirts! Quint here. Let me start off by saying I’m not the world’s biggest found footage fan. Like most things, particularly in the horror genre, once something gets popular it gets overused by people who know only how to copy and don’t get what made it effective. We saw that in slashers, we saw that in the post-Scream winky-winky horror comedies and now we’re inundated with crappy found footage movies.

That said, I found the original Blair Witch effective, I love Rec and Rec 2 and dig elements of all the Paranormal Activity movies (even if I don’t love any of them as stand alone films).

So, I wasn’t an easy mark for this film. While I do have a unabashed love of anthology movies hearing about a found footage anthology movie didn’t exactly make me do backflips if you know what I mean.

I found myself in the Library Theater after a day of running around Park City between interviews and press screenings. These midnights can go south quickly, as evidenced by my dislike of last night’s midnight flick Black Rock. There’s nothing worse than being at about hour 18 of wakefulness while some amateur-hour shitty horror movie bombards your senses.

Tons of press friends were in attendance, including our departed brother Drew McWeeny, Pop Mech’s lovely Erin McCarthy, UGO’s Jordan Hoffman, Badass Digest’s Devin Faraci and many more. When the film rolled we all kind of tucked in, most of a little tired of found footage, but hoping for good stuff. 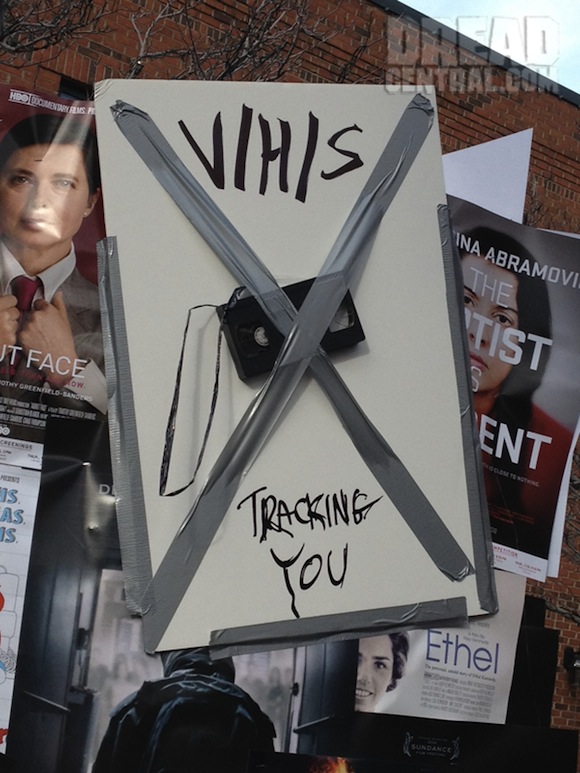 So, the breakdown goes like this: some hooligans who like to go around video taping themselves breaking shit and grabbing tit-shots to sell for $50 a pop are hired to steal a cache of VHS tapes from an old man’s house. They don’t know what’s on these tapes, but they break in and find the old man dead in front of a bank of TVs.

They search the house and one by one find tapes and watch them. That’s the wraparound with the individual segments being the content of these tapes.

Now, these aren’t snuff films. Trust me, I wouldn’t be writing a glowing review of this movie if the movie went all Murder Set Pieces on us. In tone it reminded me much more of the Tales From The Darkside Movie, which is a big compliment because I love that flick.

There are five stories, each written and directed by different up and coming indie genre directors with the wraparound directed by Your Next and A Horrible Way To Die’s Adam Wingard.

The first story is called Amateur Night and is directed by David Bruckner (one of the directors of The Signal). When it started, I thought it was going to be a typical found footage story… the overly loud and erratic shaky-cam as a group of douchebag friends give the nerdy one those spy-cam glasses with the tiny lens in the bridge. They want him to record chicks as they go out and party. “Great,” I thought. “This is Diary of the Dead all over again. Shaky footage filled with horrible, unlikable assholes.” But this segment quickly turns great as they take a pair of girls back to their hotel and find out one of them is a little… weird.

It’s like something locked into place about five minutes into this first segment. It’s an inventive idea for a found footage film to start with (think about it, with spycam glasses you take away the whole “Why don’t they just put the camera down and run away?” argument) and they use it for all it’s worth, but it’s really the getting to know and like the characters that make it work, especially when it goes into some pretty radical territory. I won’t spoil anything but a group of middle aged women sitting in front of us stood up and walked out before the segment was over. Those seats were immediately filled, by the way.

As is typical with anthology films the first and last are the strongest. You gotta hook ‘em in and then you gotta send ‘em home happy and that’s certainly true of Amateur Night, which I think is my favorite of all the stories. Hannah Fierman in particular was a standout in this segment, turning in one of the great weird genre performances in recent years.

Ti West directed the next segment, called Second Honeymoon starring Joe Swanberg and Sophia Takalas a couple on a road trip going through the Grand Canyon. If you’ve seen West’s House of the Devil or The Innkeepers you know that his style is much more reserved and you get the full West experience here. There’s a very smart thing he does with the video POV that I don’t want to give away, but it was in this moment that he got a collect gasp and scream from the audience.

At the Q&A West told us we totally overacted as a group because the scare isn’t so much a jump scare, but something simple and intrusive that earned it’s gasp because of the tension he’s built up. 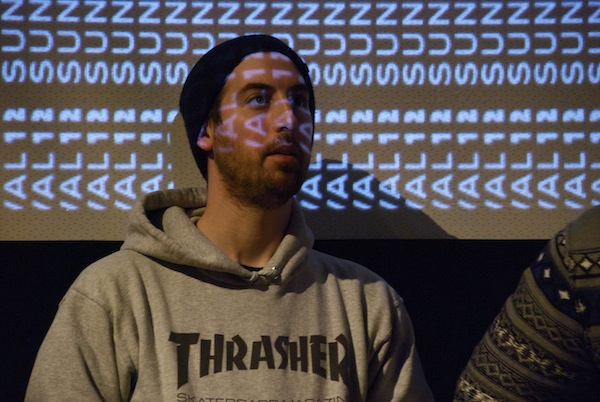 The next segment was directed by Glenn McQuaid (I Sell The Dead) and was called Tuesday the 17th, which plays like a take on the slasher genre as a girl brings her friends out to the woods where we come to find out she’s survived something horrible in the past. The shaky-cam style was most abused here and this one is probably my least favorite of the five, but I gotta say I wouldn’t call it a complete stinker, which means V/H/S is one up on almost all anthology films. There’s almost always a shitty segment in even the best. The only top to bottom perfect anthology movie I can think of is Mario Bava’s Black Sabbath.

Second to last was The Strange Thing That Happened To Emily When She Was Younger starring Helen Rogers as the titular Emily, written by Your Next’s Simon Barrett and co-written and directed by Joe Swanberg. This whole segment is told via Skype as a girl is convinced her house is haunted and constantly Skypes with her army doctor boyfriend.

Using Skype is perfect and gives us a lot of really creepy Japanese horror type tension moments as we see the spirits haunting her house behind her as she’s talking to her boyfriend (a square in the lower corner of the screen). A lot of humor, a lot of cover-your-eyes tension and some really disturbing revelations. Of all the segments, this is the one that skirted the closest to Paranormal Activity, but due to the Skype conceit it never feels like it’s aping the style of those movies… oh, and you actually get to see the damn ghosts in this one.

Helen Rogers is perfect here, playing a flirty, adorable pixie-ish type who gets scared by the supernatural activity, but also has a kind of enthusiastic adventurer inside her and wants to confront it. 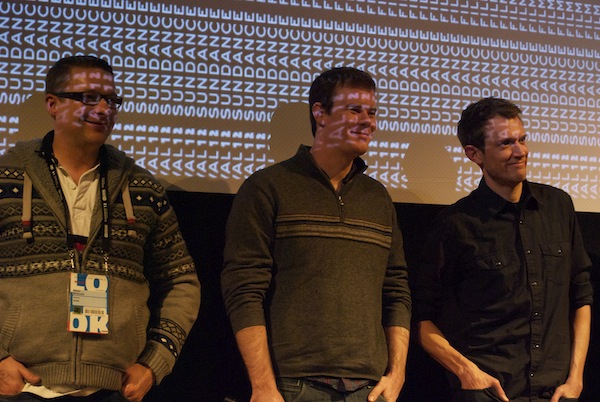 The final segment is the one that goes the craziest, as you’d expect. Remember, send home smiling. It’s called 10/31/98 and it’s set on Halloween (which I’m sure you more observant members of the reading audience already deduced. Gold stars for all of you!) as a group of friends go in search for a Halloween party.

The POV is a guy in a bear suit. He’s going as a Nanny Cam for Halloween. When they find the house it looks empty. They take it as a haunted house… not the real “holy-shit-ghosts!” kind of haunted house, but the fun made-by-people kind. Of course it’s the “holy-shit-ghosts” kind and the fun comes as they see weird shit they think is all for show. The escalation in this one is, crudely, fucking nuts. It goes over the moon weird and is the perfect adrenaline punch you need to get you out of an anthology.

This segment was put together by a collective calling themselves Radio Silence (kinda like Broken Lizard is a collective that makes comedies) and they’re pretty new on the scene. I’ll tell you what, if these guys keep churning out stuff as fun and inventive as this segment they’re going to huge within the genre.

With some minor nips and tucks here and there (particularly at the very beginning where we get what feels like a 5 minute sequence of the hooligans breaking windows and smashing walls in an abandoned complex), this becomes an easy genre classic. What these filmmakers remembered was that horror needs an element of fun. Not stupid fun, but real energy and excitement.

V/H/S certainly has all that. Plus gratuitous nudity, crazy gore and some incredibly inventive tweaks to a subgenre that’s trying its damndest to wear out its welcome.

Right now this is my favorite Sundance Midnight I’ve seen and tomorrow night’s John Dies At the End can topple it then I’ll consider it an excellent year.

I don’t know if Paramount’s Insurge label has seen this one yet, but it seems to me to be an obvious fit if they’re going to try to be the one-stop shop for found footage flicks. Seems to me you give this film the marketing team behind Paranormal Activity and you’ve got a cash-machine this Fall.

I have no doubt you’ll see this flick some time. It’s not one that’s going to play a few fests then disappear. Someone’s going to pick it up and when they do we’ll let you know! 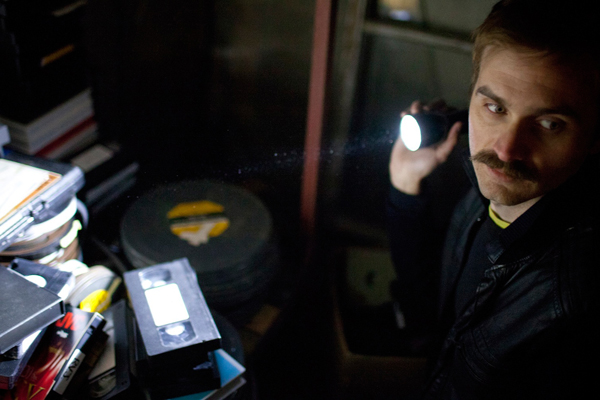 Now to finish off my review of Black Rock, a midnight movie that… well, isn’t as good as this one. Then a few hours of sleep before another full day of snow, sneezing and coughing people that make me nervous and flicker shows!