Here's your first look at the one-sheet for Don Coscarelli's JOHN DIES AT THE END!

Ahoy, squirts! Quint here. I am going to Sundance this year. There was a period of time, towards the end of my Hobbit tour of duty, where all I wanted was to just come home, sleep a lot, leisurely catch up on movies, get lost in Skyrim and not travel ever again for the rest of my days. That included Sundance.

But much like the mafia, just when I thought I was out Sundance pulled me right back in. John Dies at the End is one of my most anticipated films this year, partly because I know and like Don Coscarelli and partly because I know and like the original source material. It's such a weird bird and Coscarelli has a helluva track record doing weird/awesome low budget work. Phantasm and Bubba Ho-tep alone proves he knows his shit.

So, when that was announced and I started seeing the schedule I knew that I was going to nut up, pull out my winter clothes and mentally prepare myself for some more adventures.

What we have for you today is the first look at the John Dies at the End poster, which introduces one of the weapons in the film. John and David are kind of like stupid Ghostbusters and they have to deal with some unworldly shit. So why not have a baseball bat covered in bible pages? Oh, and some nails. That helps, too. 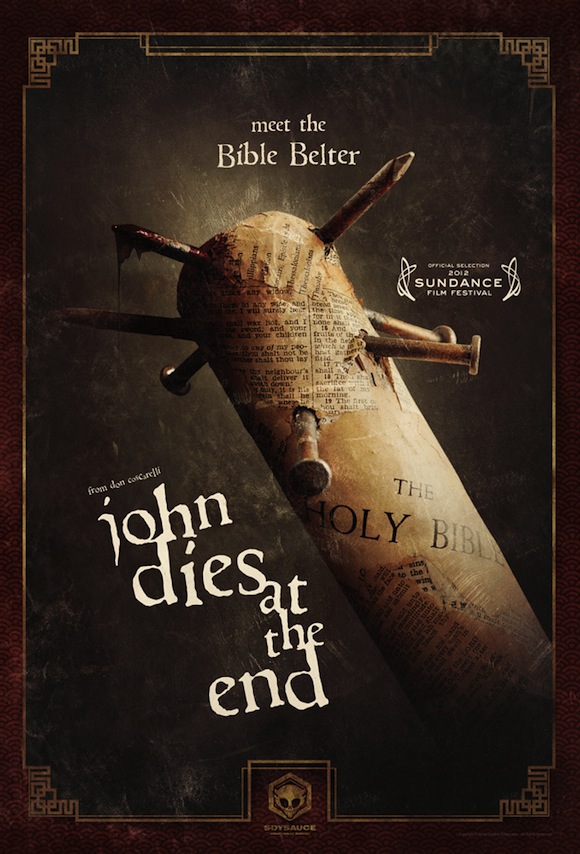 On the street, they call it "soy sauce." It's a paranormal, psychoactive drug that promises an out-of-body experience with each hit. Its users drift across time and dimensions, but some who come back are devoid of all humanity. While most of Earth's inhabitants remain blissfully oblivious to its threat. Make no mistake, an otherworldly invasion is under way, and mankind needs to be saved. Enter John and David, a pair of college dropouts who can barely hold down jobs. How can these guys possibly be expected to rescue mankind from certain destruction?

Originally erupting from the devilishly ingenious mind of David Wong, alter ego of Cracked.com's senior editor Jason Pargin, JOHN DIES AT THE END began as a Web serial that became an Internet phenomenon. In the highly capable hands of legendary cult horror director Don Coscarelli (Phantasm, Bubba Ho-Tep), Pargin's wildly trippy vision is forged into big-screen eye candy. The end result will take you to places in your subconscious that you shouldn't be allowed to visit.

The flick screens very soon and I'll be back with some thoughts on that when I finally get to see it!