Nordling Talks To Joe Carnahan About God, Liam Neeson, And THE GREY! 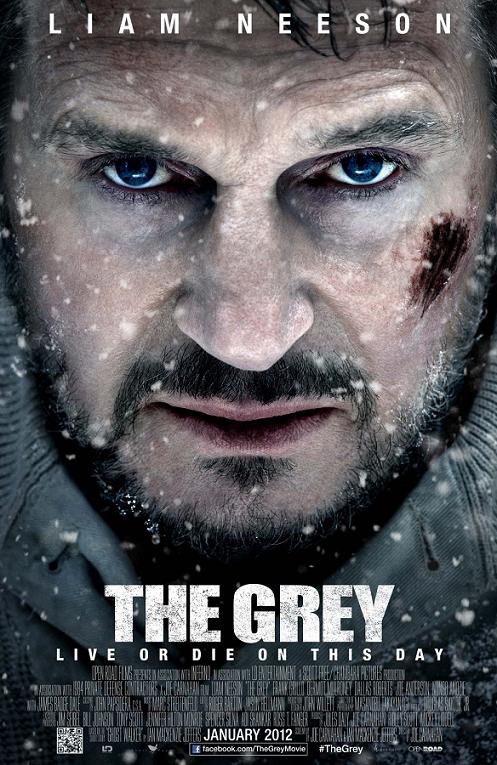 I came out of BNAT buzzing about one movie in particular - Joe Carnahan's THE GREY.  It was my favorite film of this year's BNAT, and I think many of those in attendance felt the same - THE GREY is a rich, emotional film, a harsh survival tale straight out of Jack London, and features a bravura performance from Liam Neeson, who in THE GREY delivers on an award-caliber level.  We here at AICN Tweeted about the film when we got out, and now buzz has reached a fairly high point.

Other reviewers have seen THE GREY now, and it's nice to see their enthusiasm about the film as well.  I was able to talk to the film's director, Joe Carnahan, briefly yesterday, and his jovial personality and honesty really helped make my job a lot easier.  Thanks to Joe Carnahan and the good folks at Open Road for setting it up.

Word of warning - we do discuss a specific scene towards the end, so read at your own risk.

Joe Carnahan: Alan, how are you brother?

Nordling: Hey man, how are you doing?

Nordling: I’m great. I’m fighting over a little cold, but other than that I’m doing really well.

Nordling: No, I’m in Houston.

JC: You were out of the gate like one of the people who… I appreciate that man, that’s like the rallying cry. It was fantastic to read that. What you came out of BNAT with was really wonderful, dude.

Nordling: Yeah I’d imagine that must have been nail biting for you to wait for everybody to get out and tell you what they thought.

JC: Yeah, it was. It was one of those things where it’s like… It was weird, because I was working and I thought, “I’m just going to let it happen and whatever takes place and transpires transpires,” but then to have the reaction be so kind of universally positive was brilliant. It really was.  I couldn’t ask for anything else.

Nordling: Harry’s really funny about how he paces his Butt-Numb-A-Thons and I remember when SMOKING ACES played, because with SMOKING ACES… It’s a lot of hills and valleys and I’m not to say that the movies are bad and good, it’s just that you get a really intense action movie and then something that kind of sedates you a little bit and then you come up, and I remember when SMOKING ACES played for the first time and just woke everybody up, because that played at like four in the morning. When that came on everybody was like, “Wow.” It was like caffeine straight to the spinal cord. And THE GREY had followed a few other films and I was really curious to how that would play. I had no idea when I saw it… I mean the trailers are a little bit of a misnomer, because it is an action movie…

JC: I think that’s great. Listen, like I’ve said it’s like my wish and hope for the film is that it played for you longer than the two hours it took to watch it and that it stayed with you. Again, I have deliberately kind of… when people ask me “What does this mean?” “What does that mean?” It’s like, “It’s really immaterial what it means to me.  I’m a lot more interested in what it means to you.”  It’s funny, it’s one of those situations where I learn about my own movie by talking to other people and getting their perceptions and thoughts and it’s been great. It’s always nice to do something that seems to reach people and not be this kind of disposable experience that’s over and done with.

Nordling: Especially, and I’ll talk more about this scene in a minute, but especially the scene where it’s Liam Neeson and everybody is gone… When I post this article, I’ll post it with a big spoiler…

Nordling: But when everybody is gone, and Liam Neeson is on his own, and he’s having his conversation with God.  I don’t know anyone who hasn’t had some sort of conversation like that in their life.

JC: Yeah, if you’re honest about it, I think. You know what I mean? If you’re not worried about what it may mean to be critical of the Almighty or to be critical of… Listen, this mudslide buried 6,000 people in Mexico, and you say, “I’m not interested in you working in mysterious ways; I’m interested in a fucking answer.” Do you know what I mean? And “Why?” and “To what end?”  I think we are entitled to that, man.  As human beings, as being in possession of abstract thought, we are entitled to that. So that’s where that came from and I think again my own… Listen, I’m a lapsed Catholic, so maybe it’s my own questions of faith.

JC:  Exactly. You know it’s a very indoctrinated… It’s funny, I look at it now and you know intelligent people that have obviously an appreciation and a notion of science and a scientific world and yet we suddenly go, “Yeah, He took one fish and a loaf of bread and fed thousands of people…” It’s like “Wait a minute…”  These are the things I question, brother. You read (Christopher) Hitchen’s book on God and it’s tough, man, you take any paragraph out of that book and present it to the most hardcore theologian and say, “Let’s have a debate.  Let’s talk,” and I think there’s nothing wrong with that. It’s when we get entrenched in “It absolutely is this,” and “It absolutely is that,” that I get worried, but I’m glad.  I haven’t taken as big a beating as I thought I was going to take for that scene, the shout out to God. It’s probably coming.

Nordling:  It might come, but I think that it is a universal thing. I think everybody’s got that at their lowest moment in life, definitely like in that scene, and that everybody has got that part in them that’s like, “You know what?  I’m going to shoot the finger at you.”

JC: Absolutely, dude. You’re right, where you just feel like… And again I had this thing that’s kind of funny; we had this longer bit where Liam is like, “Where are you when I need you?”  I took that out, but I always loved the way he delivered that, because there was just such desperation in the way that he said that.

Nordling:  It feels very personal from him.

JC: And again, it’s a testament to how talented that guy is. I remember thinking the emotional space he had to get in was… “We’re going to have an early day” and I remember after the scene, he was like “All right mate, so where are we having dinner?”

JC: He was just able to kind of do his thing and completely inhabit that moment and then move on, which again… I mean, that’s a consummate pro.  That’s the absolute definition of that.

Nordling:  I know it’s based off a short story by Ian Mackenzie Jeffers. Tell me a little bit about how you found that story, how the whole coming with the writer and writing the script came about, and the place that you were coming from when you directed the film, because obviously it’s a very intimate film and it’s very different than THE A-TEAM.  So how did that come about?

JC: Sure. Well it’s interesting, because I was just at the end of my experience on MI3 and say, “at the end,” meaning I was going to quit before they were going to fire me kind of thing.  That had kind of run its course, and Ian sent me this short story during that time and I remember reading it and I thought it was just so antithetical to what I was dealing with at the time, which was a big franchise and a lot of working parts and big studio, big star and all of that stuff and here I read this very spare stripped down survival tale. So I don’t know, it just appealed to me almost immediately, and not necessarily knowing how or why or all of the machinations of why it was so appealing to me, but I just knew it had a quality that I responded to.  So I optioned the story from him and then he did a run at a draft, kind of a partial draft, and then I took it and for the ensuing four and a half or five years just worked on it on and off and got it to a point, I think.

And dude, it’s tough, brother, because if you are trying to make a living doing it, you take jobs or you take writing assignments and so on and also… I didn’t know that I was of the maturation that I was ready as a filmmaker, ready as a man, I guess, to tackle this stuff until such time where I could really understand what it is I was trying to say, or just have the presence of mind enough to know, “Okay, this is what I think this means to me,” and I think it’s rendered well enough that other people can derive something from it. Do you know what I mean?

Nordling: Right. It’s got a lot of universal themes.  How tough was that shoot?  I mean was it as tough as it looks on screen?

JC: It was brutal. It was absolutely… Listen, there are those films you have to go out and earn and this is absolutely… like PABLO, that’s something I have to go out and earn, and something I’ve been earning for a number of years. I just feel like if this experience has taught me anything, it’s like I’m glad, but listen, if THE A-TEAM had been a huge success, I would be making THE A-TEAM 2.  And I think the travesty in that would have been I would not have made THE GREY, and I think what this has given me is the understanding of, “Listen, you don’t get a lot of shots man. You’ve got to make them count and you’ve got to do what appeals to you if you can.”  If you have the ability to make these kinds of films, you should.  And so what’s interesting about this is that it was absolutely difficult to shoot, and brutal, and miserable at times, but at the same time I was never necessarily aware of how miserable it was, because I was checking my watch the whole time. I was trying to make my day, because we had forty days to shoot the thing, so it didn’t ever occur to me.  But yeah, what I do love about it is that you see the results on screen man, like that wind and that snow and everything… That wind wasn’t us dragging Ritter fans up a mountain. That was Mother Nature kind of trying to blow us off of it.  So yeah it was tough, but I think in the end very, very meaningful.

Nordling: (Laughs) Well I don’t want to jinx you.

JC: I appreciate it, and again like I said thanks for the early shout out, man. It meant a lot and it really got the ball rolling.

Nordling: Cool. I’m really happy that that happened for you. Thanks a lot, man.

JC: All right bud, be well.

Nordling: You too. Bye.

THE GREY opens January 27th, and it's a must-see.  Nordling, out.