What Could Have Been: Frank Darabont Speaks About His Original Walking Dead Season 2 Opener!

Ahoy, squirts! Quint here. I’ve long been fascinated with creative near-misses. Perhaps it’s my alternate timeline loving geek brain, but I adore sitting back and thinking about what could have been, which is why I’ve been threatening to do a regular column on unproduced geek stuff for years now. I have hundreds of scripts, just haven’t gotten on the ball enough to actually follow-through.

You’ll get that column some day (probably sooner than later if a few irons I have in a few choice fires are any indication), but in the meantime I have an interesting What Could Have Been for you today and one that’s a little more timely than, say, an unproduced Hitchcock or De Palma film.

Recently, this article at CraveOnline was brought to my attention in which Sam Witwer unveils Frank Darabont’s proposed Walking Dead Season 2 opener, including some rather startling revelations on just how far in advance this Season 2 opener was being planned.

Witwer worked with Darabont on The Mist and is now the star of the successful American version of Being Human. I’ve spent some time with the man (starting on The Mist set, actually) and he’s exactly how he comes across in the below video interview. Very cool, very geeky (he’s wearing a Cyberdyne shirt, for God’s sake!) and very passionate about his craft.

I reached out to Frank Darabont for more details on his plans for the Season 2 opener and got a very detailed letter back, going step by step on what his original plans were for the episode. It was much more than I hoped for and gives a fascinating insight to Darabont’s creative process.

First, here’s video of Witwer’s interview posted by place called Paranormal Pop Culture (the interviewer was actually conducted by someone from HorrorHound):

Now here’s Frank with the follow-up, which sounds like it would have been fantastic:

Sure, I’ll confirm that storyline. Why not? Big caveat here though:

CraveOnline is much mistaken in saying this was for a “web series.” This was never meant as a web gimmick, this was intended for use in the actual TV series. I wanted to kick off the 2nd season with the flashback episode Sam describes, which would have followed a squad of Army Rangers getting trapped in the city and trying to survive as Atlanta falls.

The idea was to do this with a very focused “you are there” documentary feel. Not going all shaky-cam, but still making it a bit rawer and grainier than the rest of the show. We’d start with a squad of maybe seven or eight soldiers being dropped into the city by chopper. They have map coordinates they need to get to; they’ve been told to report to a certain place to provide reinforcement. It’s not a special mission, it’s basically a housekeeping measure putting more boots on the ground to reinforce key intersections and installations throughout the city. And we follow this group from the moment the copter sets them down. All they have to do is travel maybe a dozen blocks, a simple journey, but what starts as a no-brainer scenario goes from “the city is being secured” to “holy shit, we’ve lost control, the world is ending.” Our squad gets blocked at every turn and are soon just trying to survive. I wanted to do a really tense, character-driven ensemble story as communications break down, supply lines are lost, escape routes are cut off, morale falls apart, leadership unravels, mutinies heat up, etc. (Yes, this approach owes a spiritual debt to a number of great films, including Walter Hill’s Southern Comfort.)

Along the way, I thought we could briefly dovetail this story with a few established characters from the show. Not to overdo that, mind you, because it could get silly and too coincidental if you load too much into that idea. But I thought it would be great to veer off on a quick narrative detour that brushes our soldiers briefly up against some people we know. Picture our squad arriving at a manned barricade where some civilians are being held back from leaving the city on shoot-to-kill orders to stop the spread of contagion, it’s a panicked high-intensity scene, and in this crowd of desperate people we find Andrea and Amy. The barricade gunners panic, the civilians start to get mowed down by machine gun fire, and in this melee the girls get pulled to safety by some old guy they don’t even know. It’s Dale. He’s nobody to them, just some guy who saw the opportunity to do the right thing and reacted in the moment. This would have been perhaps a minute or two of the episode, just a cool detour like the various outposts the soldiers encounter in Saving Private Ryan, but we would have witnessed the moment that Dale meets Andrea and Amy, seen where that relationship began. I also felt it would be a great way to get Emma Bell back into the series for a moment, because she was so wonderful and we were all so sorry that her character died and she had to leave the show. (Of course if this “brush with established characters” idea didn’t work in the script stage, I’d have tossed it out. You try a lot of ideas like that as you go, see how they play. But I thought this one stood a pretty good chance of being engineered to work well.)

So the story follows these soldiers through hell as the city falls apart and the squad implodes, with Sam’s soldier being the main character and the moral center of the group. He becomes the last survivor of the squad, and he finally gets to the map coordinates they’ve been trying to get to from the start: it’s the barricade at the Atlanta courthouse intersection from the pilot where Rick later finds the tank. The soldier is still alive when he gets there, but he’s been bitten. He’s accomplished his “simple” mission, but he’s gone through seven kinds of hell to do it (including being forced to frag his squad leader), and now he’s dying. And he crawls off into the tank just to get off the street and under cover. As his fever builds and the poor guy starts to hallucinate, he pulls his last grenade and considers ending his life. He sets the grenade down on that shelf for a moment to reflect on all the shit and misery that brought him to this sad end-point of his life, and to dredge up the courage to pull the pin...but before he can act, the fever burns him out and he dies.

The kicker comes in the last moments of this episode:

After the soldier dies this squalid, lonely death...and after a quiet lapse of time...we do a shot-for-shot reprise from the first episode of the first season: Rick comes scrambling into the tank to escape the horde...blows that zombie soldier’s brains out...now Rick’s trapped...fade out...the end.

The notion was to take the “throwaway” tank zombie Rick encountered in the pilot, and tell that soldier’s story. Make him the star of his own movie, follow his journey, but don’t reveal who he is until the end. The idea being that every zombie has a story, every undead extra was once a human being with a life of his/her own...was, in a sense, the star of his own life’s movie. And we’ve followed this one particular guy and seen how his life ended; we witness his struggles, see his good intentions and his failures, and we experience his godawful death in this tank. That’s why I cast Sam as that tank zombie in the first place instead of just casting some extra. I had this story in mind while filming the pilot, and I knew I’d need a superb actor to play that soldier when the time came.

And then starting with Episode 202, we’d be back with Rick’s group and back in step with the flow of the established story from last season.

I always had in mind to throw in a “wild-card” episode every season, maybe as a season opener or closer. Just a separate story more in the feel of an anthology series, one that appears completely off the track of the regular series but actually does wind up tying in somehow by the fade-out. They did that sort of thing on LOST on occasion, and I really respected it. It always seemed like a bold choice that trusted the audience and rewarded their loyalty with a totally unexpected surprise episode every so often.

That’s it from me. I hope things are well on your end. 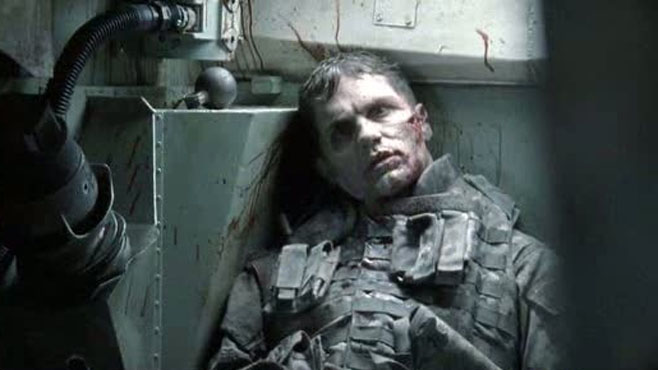 I love the secrecy behind this proposed episode idea. Witwer went uncredited for his brief appearance in the pilot just so there could be that extra level of surprise once they actually got to shoot this “wild card” episode. I also love Frank’s idea to set Dale’s meeting with Andrea and Amy in such a way that absolutely establishes their relationship as we’ve come to know it in the show.

Alas, it wasn’t meant to be, but it’s cool that we get a glimpse into what could have been.