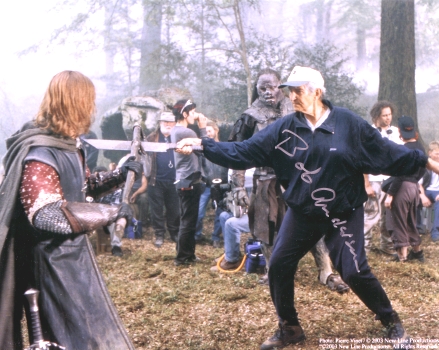 If you don't know who Bob Anderson is, I can assure you, you're familiar with his work.  The Original STAR WARS films.  THE LORD OF THE RINGS and THE HOBBIT.  THE PRINCESS BRIDE.  The Antonio Banderas ZORRO films.  Bob Anderson was a sword master who helped orchestrate many of the swordfights that we know and love today, and in many instances, actually did a lot of the fighting.  The swordfights in the STAR WARS films?  That was Bob Anderson.  The amazingly awesome fight choreography in THE PRINCESS BRIDE?  That was Bob.  Who taught Viggo to kick a thousand Orcs' asses and then sit back with a drink?  That was Bob.

Just watch the duel in EMPIRE, as Vader toys with Luke before unleashing the full power of the Dark Side on that scaffold.  There's a genuine menace to his swordplay in that scene, and that was entirely due to Bob.  According to Wikipedia, Mark Hamill wanted to make sure he was recognized for his work - "Bob Anderson was the man who actually did Vader’s fighting. It was always supposed to be a secret, but I finally told George I didn’t think it was fair any more. Bob worked so bloody hard that he deserves some recognition. It’s ridiculous to preserve the myth that it’s all done by one man."

Bob Anderson worked with Errol Flynn, and had been in the business since 1953, working with Flynn on THE MASTER OF BALLANTRAE.  Here's Viggo talking about Bob Anderson for the documentary RECLAIMING THE BLADE:

And here's the amazing choreography that Bob designed for THE PRINCESS BRIDE:

Our best wishes and prayers go out to Bob Anderson's family and friends.  Nordling, out.